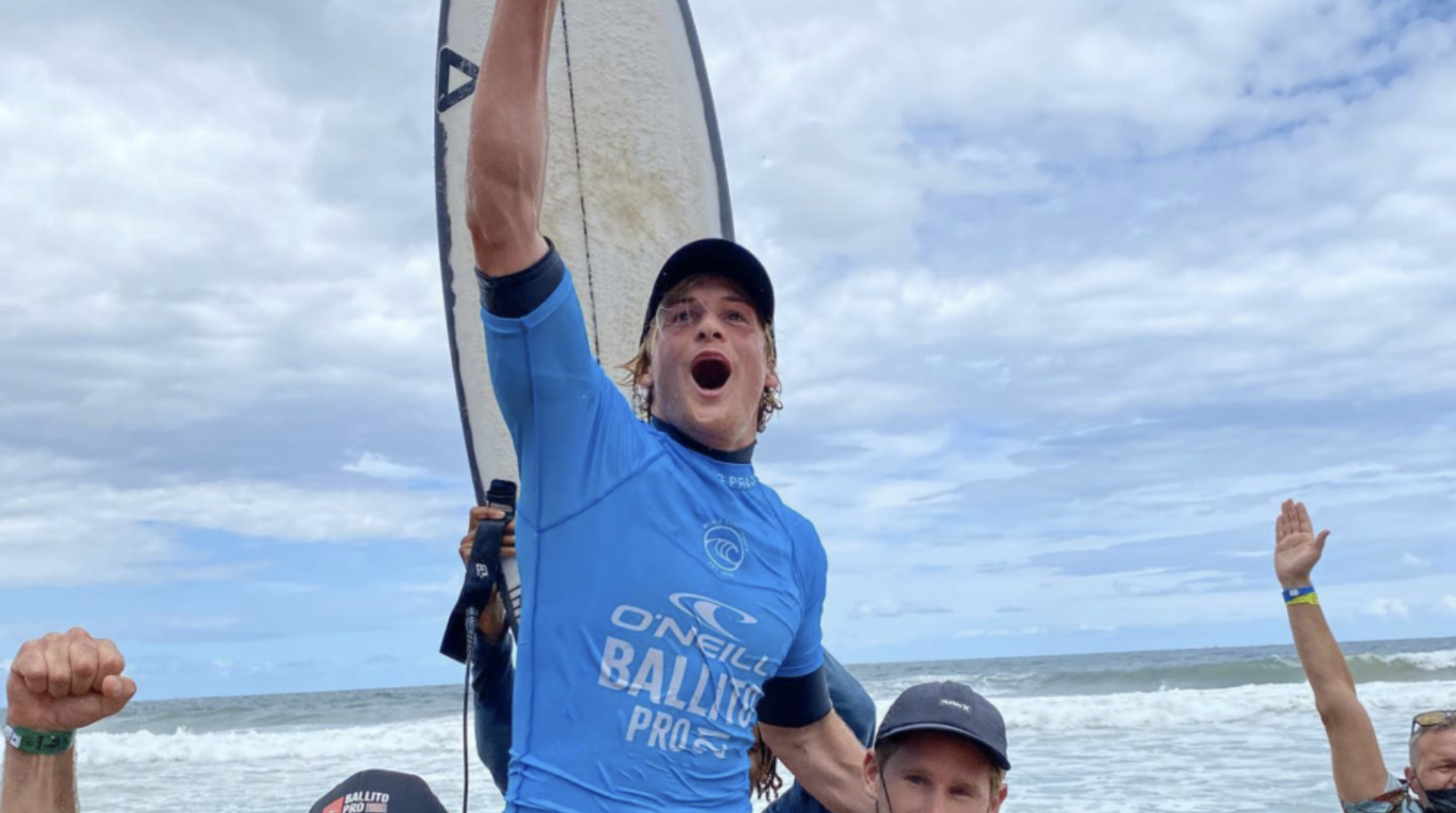 With The Ballito Pro having been postponed earlier in the year due to COVID it was uncertain as to whether the event could live up standards during KZN’s summer. The concern was, and always is, that Ballito would not get contestable waves during the summer. This concern was valid and something the event organisers had to consider. Nevertheless, they decided to give it a go and set the dates for the 9th-19th of December in the hopes of a miracle, and a miracle is what they got.

For the last two days we have seen pumping 4-5ft waves reeling down the Willards bank. Yesterday The Men’s Ballito Pro got underway in solid stormy conditions. The men surfed the first 2 rounds of the event and put in some fine performances. Standouts on day 1 were Slade Prestwich and the young Daniel Emslie. These two managed to exploit the big open faces and showed what growing up on a right-hand point break can give you.

Slade slicing off the top!

After a stormy first day we woke this morning to a rare summer sight on The Dolphin Coast. The ocean had cleaned up overnight, light offshore winds blew and 5ft waves ran from top to bottom set after set. It was as if the ocean knew the event was on and decided to bless KZN’s coastline.

The day kicked off with the Round of 16! 4 heats consisting of 4 surfers each. Before the start of the round, we had a look at who was up against who and realised just how stacked the round was. Every heat was a banger, and we knew we were in for an interesting day.

Jordy Smith was in the first heat of the day, up against good mate Chad Du Toit as well as Daniel Emslie and Joshe Faulkner. All 4 surfers made errors early in the heat, but Jordy eventually found his groove and took the win. Jordy then faced off against Jordy Maree in the quarterfinals. He wasted no time and got off to a strong start dropping an 8.33 early on. You could tell Jordy Smith was getting back into his stride and started to surf like the Jordy we all know. He managed to beat Maree and met up with Slade Prestwich in the semis. Slade had been on fire all event dropping some of the highest heat totals and displaying his smooth forehand rail game. This looked as though it would be a big test for Jordy and proved to be just that. The lead bounced back and forth between the two surfers as they went blow for blow on the reeling righthanders. Through the middle part of the heat Slade held the lead and looked as though he might take the win. However, Jordy had a different plan in mind and dropped an 8.67 and ended up winning the heat by a margin of 0.06. As expected, Jordy was through to the finals and waited to hear who he’d be up against.

Jordy on his way to the finals!

Adin Masencamp was the last heat of the Round of 16. He was up against Dale Staples, Eli Beukes and Liam De Villiers. Dale has one of the sharpest forehands in the country and in 5ft righthanders looked to be the favourite. However, the other 3 surfers seemed to get going early, whilst Dale couldn’t find what he was looking for. The dark horse, Liam De Villiers, led for majority of the heat until Adin and Eli clutched up and put in solid scores to see them through. Adin then came up against local hero and recently crowned SA Champ, Shane Sykes in the quarterfinals. It was clear from the get-go that the crowd were behind the local boy and with the momentum of his SA Champs win, Shane seemed to be the favourite. Mid way through the heat Shane was winning with 4.83 and an 8.33. Adin needed a solid score and like the previous round, clutched up when he had to. He knifed through some serious turns on his forehand and got the score he needed. Adin then met up again with Eli Beukes in the semis. Eli and Adin had met in their first heat of the day where they were both able to advance. Eli had been in top form the whole event and is an upcoming SA surfer that many, including us at Zag, have our eyes on. This heat was always going to be tight and either surfer could take the win. Eli started strong with an 8.17 but struggled to back it up. Adin is a sharp competitor and rarely puts a foot wrong. He clocked in two solid scores in his first two waves of the heat, and this was enough to see him through to the final to meet up with Jordy Smith.

Aden knifing his way to the end!

With 5 minutes to go before the start of the final surf fans and beachgoers started to gather and find their seat for what was set to be one hell of a showdown. Jordy had found his groove and seemed unstoppable going into the finals. However, no one could count out Adin as he had been on top form throughout the event and looked solid and precise on his feet. To beat Jordy, it would take a fierce competitor and Adin is just that. The final was set, and the buzzer sounded.

Adin’s flawless forehand rail game helped him get off to a flying start, posting an 8.17 on his opening ride. Whilst Adin kept to the rail Jordy took to the sky, launching himself into the air and collecting a 9.00 ride on his way down. Jordy was now in the lead, and one could sense the favourite taking home another Ballito Pro title. However, Adin was not quite done. Sitting down the beach, Adin managed to find a wave that offered meaty sections and allowed him two powerful turns, earning him a 7.77. With only three minutes left on the clock, Jordy was left needing a 6.94. Something he is more than capable of finding. In the dying seconds he found a wave, but the score came in just short. Adin raised his arms in celebration as he was announced The 2021 Ballito Pro Champion!

Here’s what he had to say after the heat, “It feels amazing. I had a couple of clutch moments where I had to perform under pressure. I worked really hard on my mental strength, nutrition, my surfboards, everything before this event. So, for it all to come together, it’s the biggest result of my life and especially against Jordy Smith. He is the best surfer to come out of South Africa and beating him was the cherry on top. All I wanted to do was showcase what I can do as a surfer, so I’m really stoked”.

All in all, the 10 day event was a major success and ended on a high. Champions were crowned, crucial points were earned, and surf fans were entertained. SA surf is alive and well. We can’t wait to see our men and women take on the rest of the surf world.

Images By The Ballito Pro