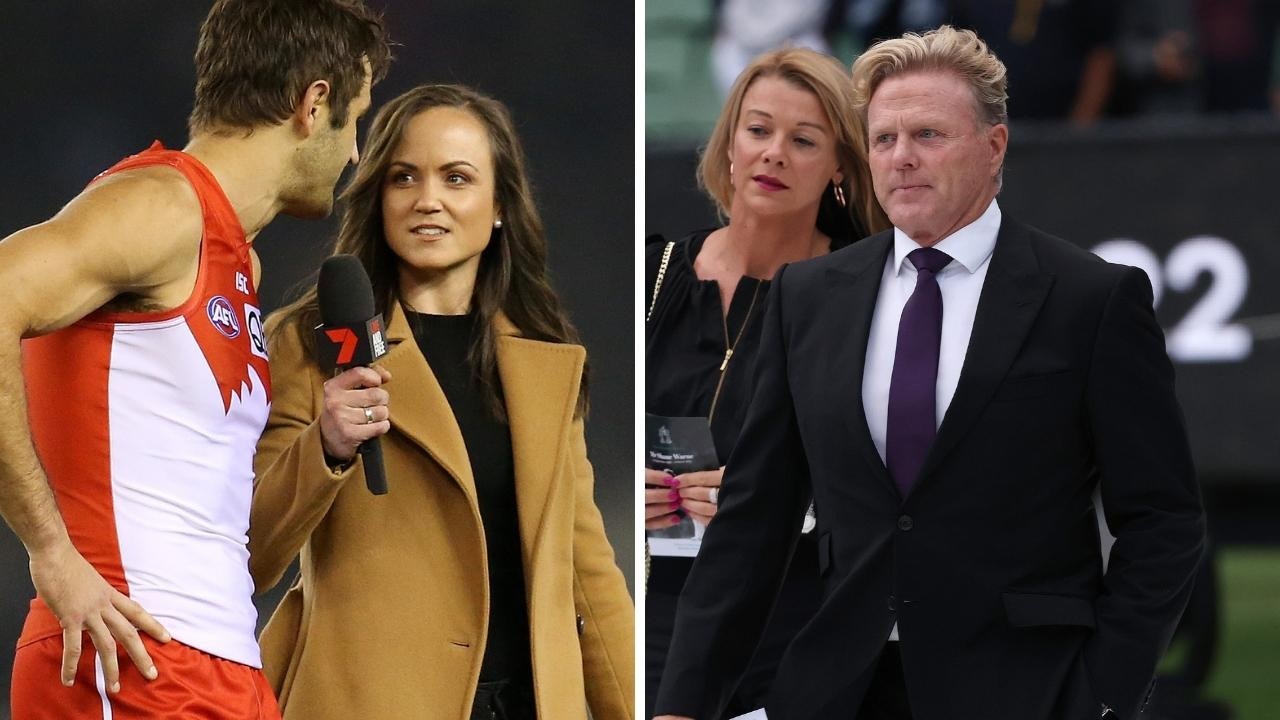 The chief Channel 7 analyst was earlier this month dragged into a storm following comments by iconic football commentator Rex Hunt.

Hunt was widely condemned on social media for a Facebook post where he took aim at the current state of AFL commentary boxes and how networks are supposedly pandering to have “equal genders”.

Pearce has since been praised for her work with Channel 7 as part of the network’s premier Friday night slot. Her move saw football legend Wayne Carey shuffled to the Saturday team.

Public commentary about two of the best analysts in football being compared to each other is again flooding social media with comments by Hawthorn legend Dermott Brereton reigniting the debate.

The Herald Sun first reported Brereton, who is also one of the most insightful and popular analysts through his position with Fox Footy, posted on social media: “Gender quotas aside, side-by-side against Daisy for football analysis, Wayne is by far the better analyst.”

Brereton later told the newspaper: “Rex Hunt is a legend.

“So often the common comeback is you are a middle-aged, white, Anglo-Saxon male who played in a male-dominated field and now you are threatened by a female.

“Honestly it is such a flimsy argument, I am not threatened by anyone. If you tell the truth to how you see it, then you have nothing to worry about.

“Daisy is a very competent commentator, but she is not Wayne Carey. So I can understand where Rex was coming from. He just didn’t quite annunciate it in a 2022 qualified fashion.”

Pearce is now being celebrated all over again for her talents.

Veteran radio and TV host Andy Maher wrote on Twitter: “Daisy Pearce is a brilliant footballer, the possessor of a great footy brain, a gifted broadcaster, an insightful commentator and a high-quality and principled human being.”

Sports reporter Oliver Caffrey posted: “Daisy Pearce is one of the best footy analysts on TV and radio, end of story.”

Channel 7’s Ryan Daniels compared Pearce to Doris Burke, one of the most respected NBA analysts in the United States with ESPN.

“Daisy Pearce is a genuine star. Brilliant analysis, in the moment, and without hesitation. She’s becoming our version of Doris Burke,” he wrote on Twitter.

Pearce was also named the 2021 winner of the AFL Media Association’s award for best analysis on TV and radio.

Hunt’s original tirade came in response to a Facebook post by his friend John Locco, who wrote he wanted to hear more from Carey during a Friday night game.

“We … you and I, came from an era that is only a memory now. Tough … relentless football. The game is a robotic, pre planned … keeping’s off affair,” Hunt said.

“The do gooders have won. Give me a week as Chief Commissioner John and I guarantee these b*****ds would not even think about looking sideways at law abiding citizens.

“Let alone roaming the streets. I probably don’t have the CV to say this … but I will.

“After 200 games on the field and over 2000 in the box … broadcasting box that is … Wayne Carey to my mind is the best qualified comments man alongside Lethal (Leigh Matthews).

“Call me a fossil or whatever.

“But our game has been ruined by people who are making rules to appease soft penises. For gods sake … give us some biff.

“Give us some spice. And Daisy … just let Carey say a few words … please. If I had one bloke to play for my life … The Duck’s (Carey) him.

“I want Carey to talk about that rough brave play.”

Hunt was approached by the Herald Sun regarding his comments earlier this month, with the 202-game AFL player saying he wasn’t backing away from what he’d written.

“Daisy is terrific and she’ll go coaching and I understand you’ve got to have a lady there but which bright spark at Channel 7 thought to get rid of (Carey) – he or she is wrong.”