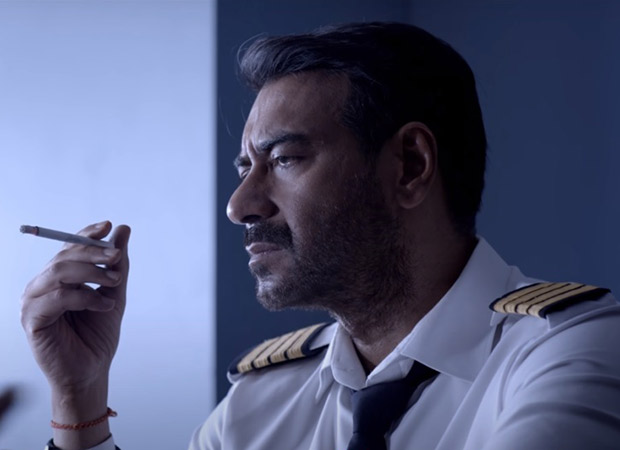 Ajay Devgn is known to have a keen eye for powerful content and creating entertaining cinematic experiences for audiences. The actor-director-producer has time and again curated films that have left a lasting impression not only in the annals of cinema history but also in the hearts of audiences. Now, he is all set the entertain the audience with his upcoming directorial Runway 34 in which he will be essaying the role of Captain Vikrant Khanna. The film also stars Rakul Preet Singh and Amitabh Bachchan.

Ajay Devgn breaks down the first trailer of Runway 34; reveals they shot the court scenes with 14-15 cameras

In a recent video, Ajay Devgn broke down the first trailer of the film. Talking about the opening sequence of the trailer, where Ajay is seen in a pilot’s uniform in a restroom with a cigarette in his mouth. “I think if you establish the character in the first shot of the trailer, I think it works the best and Captain Vikrant Khanna is somebody who is brilliant, but he loves to break the rules and he loves to defy authority. So that is the character and I think this line ‘Jalaya toh nahi na’- he smokes, he got this habit and he usually challenges authority,” he said.

Talking about shooting in cramped spaces like a cockpit as seen in the trailer, Ajay said, “Just not the trailer, there are a lot of scenes in the cockpit and the major drama is in the cockpit. It was pretty tough to shoot. The first decision we took was to make a genuine, real cockpit and the panels were all real. The size of a cockpit is small. Two people barely fit in. It was very challenging to shoot it and we needed different camera angles for it. I did not want to open the cockpit and cheat the camera moves. Some scenes required multiple cameras. My DOP was struggling with placing and lighting for the cameras. Eventually, he did a fabulous job.”

The trailer also shows some intense scenes taking place inside a courtroom. The courtroom scenes have all the three actors sharing frames. When asked about the same, he said, “When you have great actors like Mr. Bachchan, Rakul and all of us. When you perform scenes and flow and all of us. I think it always works better because the performances are better and I wanted to capture it as if it was a live moment. Everybody had to feel, Everybody on the set had to react at the right time when the scene was going on. We were shooting with 14 to 15 cameras which I don’t think anybody has done before at least here.”

Talking about his show off with Amitabh Bachchan in the trailer, the actor said, “It’s a conflict between a rule maker and a rule breaker. and sometimes he wins an argument, sometimes I win an argument and we both try to put each other down and this was just a part of it.”

And finally, talking about the reason behind the title of the film, he said, “Most of the airports have two runways that are either crossed or a single runway. So it could be that if it is 34 the other side could be 16. In the film, he chooses to land on Runway 34. Runway 34 is the main characteristic of the film I would say.”

Runway 34 will be released in theatres on April 29.