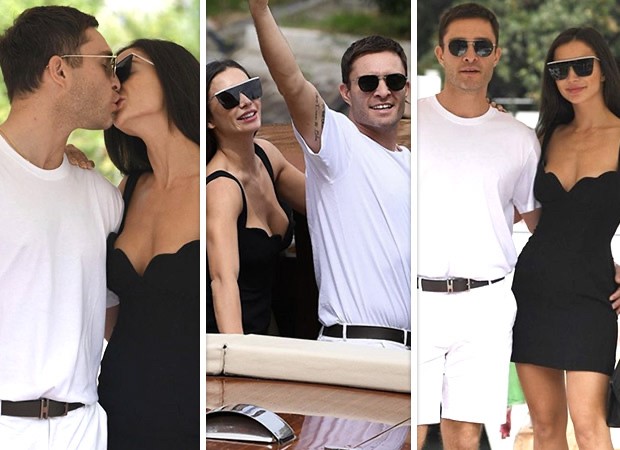 Singh Is Bling actress Amy Jackson has found love it in Chuck Bass from Gossip Girl, also known as Hollywood actor Ed Westwick. Amy Jackson, an Indian-British actress, has recently made news for her romance with Ed Westwick. The actress seems to have just confirmed her romance with Ed because she posted some cuddly images a few days ago. Now that she has shared another intimate moment with her boyfriend, the internet is on fire. Let’s just say that Amy Jackson and Ed Westwick, who have been painting the town red, are extremely attractive as a couple.

During their day of sightseeing in Italy, the couple can be spotted displaying PDA. The 79th Venice Film Festival is the reason they are there. Amy and Ed can be seen in the photos enjoying an intense kiss before boarding a boat in Venice. Ed dressed comfortably for their stroll in a white T-shirt and matching shorts, while Amy put on a leggy display in a black little dress. Her dress had thick straps, a plunging neckline, and a scalloped design. She added some minimum makeup and a black handbag as accessories. She kept her hair straight and open, completing the outfit with black heels and sunglasses.

Meanwhile, on the work front, Amy was last seen in Tamil film 2.0 alongside Akshay Kumar and Rajnikanth. While, Ed is known for playing playboy Chuck Bass on the CW Network’s Gossip Girl from 2007 to 2012. The show also starred Blake Lively, Leighton Meester and others. Ed also played the lead in the sitcom White Gold. Ed had made his film debut with Children of Men (2006). He later appeared in films such as, Breaking and Entering, Son of Rambow, S. Darko, Chalet Girl, J. Edgar, Romeo & Juliet, Bone in the Throat, Freaks of Nature, Billionaire Ransom and many more. He was last seen in Me You Madness, which was released last year.

Also Read: Amy Jackson looks too hot to be handled in black dress as she heads out hand in hand with boyfriend Ed Westwick for the National Film Awards 2022