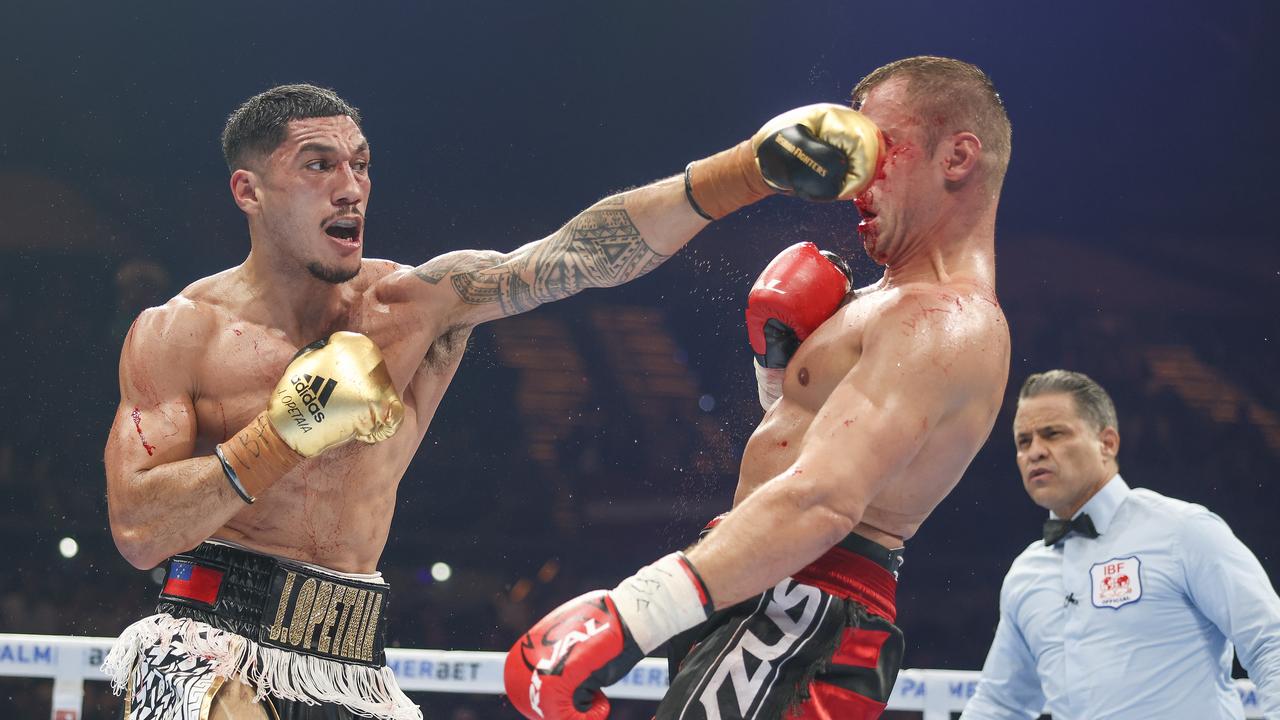 Jai Opetaia has stunned the boxing world, producing a huge upset over Mairis Briedis to win their IBF cruiserweight world title fight on the Gold Coast on Saturday night.

The 27-year-old came out firing and put on a clinic to gain the upper hand in the early rounds of the bout.

But while Opetaia appeared to go from strength to strength early in the fight, it was revealed afterwards he had broken his jaw in the second round.

Opetaia went on the attack as he battered Briedis, leaving the Latvian with a cut above his right eye after the opening round.

The Australian kept hammering away and landed a brutal right uppercut to Brieidis’ jaw at the end of the fourth round, leaving him so dazed he went to the wrong corner with a bloody nose.

Main Event commentator Ben Damon said: “The uppercut sailed through and did damage and busted the nose of the champ Mairis Briedis, who didn’t know where he was.

“The champion looks flustered as blood courses from his nose. Opetaia is boxing a clinic.”

Australian boxing legend Jeff Fenech added: “He’s more than flustered. He doesn’t know where he is at the moment.”

Somehow Briedis recovered as the fight turned into a classic with both boxers exchanging heavy blows and proving they have chins of granite.

The 37-year-old rallied and landed some huge uppercuts that did serious damage to Opetaia’s already-busted jaw.

Damon described Opetaia’s jaw as “badly disfigured”, while Fenech added: “That granite jaw might be broken.”

“Will clearly need surgery. Mairis Briedis has visited the new champion’s dressing room to congratulate him and ask for a rematch.”

“He has shown himself to be otherworldly tough. He still didn’t go down.” Damon said.

“This is an epic fight. An incredible battle. An absolute war between two warriors here on the Gold Coast.”

A jubilant Opetaia couldn’t speak after the fight and his trainer Mark Wilson revealed he broke his jaw in the second round.

Gracious in defeat, Briedis went to pay his respects to Opetaia after the fight and revealed Opetaia also broke his nose, saying “it’s one-one”.

He said he was sick in the lead up but fistbumped Opetaia and hinted he would welcome a rematch.

Opetaia becomes the first Australian to become world champion since Jeff Horn in 2017.

It’s also the heaviest division Australia has ever held a world title belt.

Horn said: “I’m so excited for him, I feel like I’m shaking. It brings me back five years ago and winning the title and I’m so happy for him.

“He was a teammate of mine in 2012 (at the Olympics), he’s such a skilful guy and he showed that tonight. He did absolutely awesome. I’m very proud of him like everyone else is as well.”

The boxing world was quick to heap praise on Opetaia’s herculean effort.

Australian boxing great Barry Michael said: “Mairis Briedis is a superb world champion with dynamite in both hands and we’ve seen that. And he’s beat him with a busted jaw.

WBO cruiserweight champion Lawrence Okolie was clearly watching with interest, declaring he is eager to take on Opetaia once his jaw has recovered.