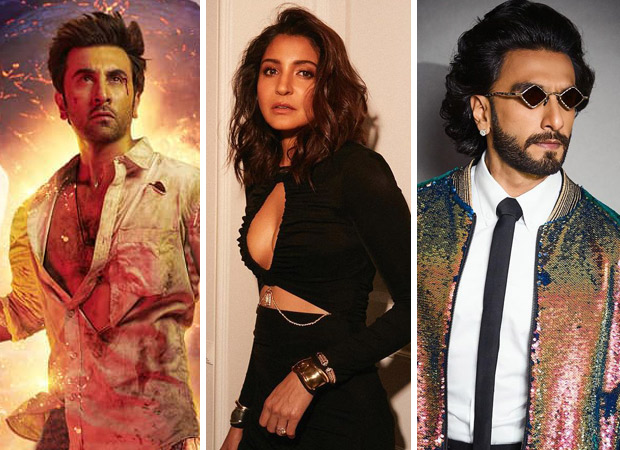 Earlier today, Dharma Productions launched the trailer of one of its most ambitious films of the decade, titled Brahmastra. The Indian fantasy drama based on mythology features an ensemble cast of Ranbir Kapoor, Alia Bhatt, Amitabh Bachchan, Nagarjuna, Mouni Roy, with a special appearance from superstar Shah Rukh Khan. The first part of the trilogy series will release in the next few months and needless to say, a glimpse of the same that was unveiled today left many in awe. And this includes Bollywood celebrities like Anushka Sharma, Bhumi Pednekar, Ananya Panday, Janhvi Kapoor, and Ranveer Singh among others.

Brahmastra Trailer: From Anushka Sharma to Ranveer Singh, here is how Bollywood celebrities reacted to it

For the first time, newlyweds Ranbir Kapoor and Alia Bhatt will be coming together on the big screen. While this magnum opus was announced about a few years ago, the film encountered many hiccups. Now that we have received a sneak-peek into the fantasy film, here’s how Anushka Sharma reacted on Instagram, “This looks so promising and exciting. Kudos team #Brahmastra.”

On the other hand, actress Janhvi Kapoor took to her Instagram story to share the trailer and captioned it saying, “This is huge!! A first for Hindi cinema Feel such pride to finally see a glimpse of this spectacular vision!! Truly a world like we’ve never seen before.”

Adding to it was, Ananya too added to her Instagram story saying, “Mega Mega Mega!!!! This is out of this world!!!”

Besides them, some other celebrities also commented on the trailer video shared by Alia Bhatt on Instagram. Bhumi Pednekar shared clap emojis on the comments section whereas actor Ritiesh Deshmukh raved it to be ‘Awesome!’ On the other hand, actor Ranveer Singh too commented saying, “Unprecedented! Bravo!” On the other hand, film producer Guneet Monga also added, “Mind blowing. Cannot wait.”

Mothers Neetu Kapoor and Soni Razdan took gave a shout out to the film in their own unique style. While Neetu commented on with emojis in her Instagram story while announcing that the trailer is out, Soni commented on her daughter Alia’s post saying, “Ohhhhhhhhhhh how absolutely amazingly stunning.”

Directed by Ayan Mukerji, Brahmastra is slated to release on September 9.

Also Read: Brahmastra Trailer: Ranbir Kapoor gets credited as one of the co-producers in the Alia Bhatt co-starrer