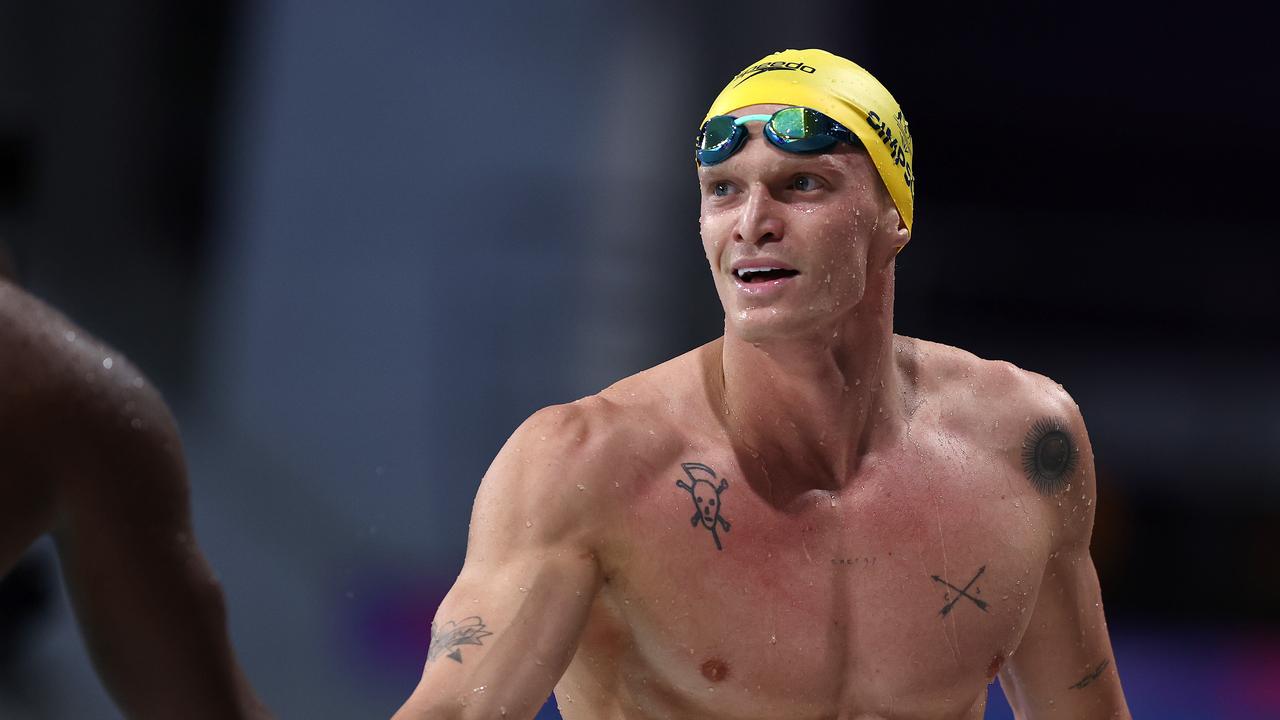 Australians can’t get enough of the Commonwealth Games, with millions tuning in across the nation on television and online to watch the multi-sport event.

Thanks to the time difference, Australia’s best athletes are sometimes competing in the middle of the night Australian time, but that has not deterred more than 9.9 million Australians tuning into the Channel 7’s Birmingham 2022 broadcast on TV.

“Our exclusive, live and free coverage of the Birmingham 2022 Commonwealth Games delivered incredible and magical moments and hours of engaging entertainment for millions of Australians,” Mr Burnette said.

More than 1.77 million have also caught the Games online on 7Plus, where video on demand engagement is up 165 per cent from the 2018 Gold Coast Commonwealth Games and live streaming up 86 per cent.

“In the past seven days, more than 294 million minutes have been streamed across 7Plus’s 30 dedicated exclusive and free, live and replay Commonwealth Games channels,” Mr Roberts said.

“7Plus’s coverage of our all-star Australian team is reaching new and existing viewers in new ways on different screens.”

The Games night session has averaged 968,000 total viewers so far, including 26,000 via video on demand, and is the No.1 most watched program in its timeslot.

Younger viewers in particular have taken to 7Plus, with Virtual Australia data recording 19 per cent of people aged 18 to 39 watched the sporting action exclusively on Seven Plus.

OzTAM – which measures television audience engagement – shows the Seven Network is No.1 across the country, in capital cities and the 16 to 39 age range so far in 2022.

“Our innovative and comprehensive coverage has delivered huge national total television shares every day it’s aired and has increased Seven’s winning lead in total people and 16 to 39s in 2022,” Mr Burnette said.

Miller is the director for visually-impaired bowler Melanie Inness.

The Michelle Jenneke revival continues with the Aussie through to the final and a genuine medal contender after clocking a personal record time – but it won’t count.

Jenneke ran a personal best time of 12.63, three-hundredths of a second faster than she ran in the semi finals at the World Championships but due to the wind the time won’t be recorded as legal.

But it was not enough to finish first with new world record holder and world champion Tobi Amusan dominating the heat to win in Games record 12.40.

It was a relaxed looking Jenneke who performed a toned-down version of her signature “jiggle’ ahead of the race.

“It doesn’t count as a legal time but, that’s the fastest I’ve ever covered a 100m over hurdles so really stoked,” she said afterwards.

“I’m in the shape of my life. Clearly. It’s just really exciting. I still feel I’ve got a little more in the tank so we’ll see in a couple of days.

“I feel I run best when I am happy and relaxed. Just soaking it all up. I’m not someone who likes to be super focussed on what I do. Even in the call room I am chatting with the officials. That’s what I do.”

Amusan of Nigeria broke the women’s world record in the 100m hurdles in Oregon and a debate erupted around the shoe she wore.

While not wearing the controversial shoe herself, Jenneke gave her opinion ahead of her competition in Birmingham.

“I ran quite a PB in that race and ran in the same shoes that I have been running in for the last five years,” Jenneke said.

“I know I can’t attribute my PB to the shoes because it’s the same shoe, the same model of shoe.

“I have tried some of the newer spikes that they have coming out, the technology is amazing, and I’m sure people are faster but at the same time if you go back 10, 20 years, look at the shoes people were wearing, they were entirely different to what we were wearing five years ago. The technology is forever evolving.

Australia and Sri Lanka are more familiar doing battle on the cricket pitch, and with four giants bordering on 200cm taking to the sand, you felt like each of them could do a job if given the new ball at a Gabba Test.

But beach volleyball is the sport which has taken their hearts and, for the second Games in a row, Australia’s men are through to the medal matches after surviving a scare against Sri Lanka to reach Saturday’s semi-final.

After conceding the first set, the pairing of Chris McHugh and Paul Burnett prevailed 16-21 21-16 15-9 to set up a semi-final with Rwanda.

Australia, surprisingly, dropped the first set 21-16 against their unfancied rivals – who only scraped into the quarter-finals as one of two third-place finishers.

In blustery conditions at the Smithfield arena in Birmingham, the defending champions appeared to struggle with the wind as their serves didn’t have their regular sting.

It was the Aussie pair’s first dropped set of the whole Commonwealth Games, and they responded as you’d expect of the top seeded team.

With the experienced McHugh cranking up his lethal right hand to fire some unreturnable winners, Australia led from the first change of ends and never looked back to take it 21-16 and force a deciding set.

The final set is a race to 15 points, and Australia jumped out of the blocks beautifully to lead 8-4 and have the semi-final result within reach.

A controversial video referee call to overturn an Australian point – that would’ve extended their lead to 12-8 – momentarily halted the charge, but they closed out the win just inside an hour.

9:30PM AUSSIE THROUGH TO FINAL

Buschkuehl leapt 6.84m, only one centimetre behind Ghana’s Deborah Acquah, who delivered the biggest leap of the qualifying round.

Buschkuehl broke the Australian record last month with a jump of 7.05 metres and is in career-best form.

Australia’s chances of sweeping the road cycling golds at the Commonwealth Games has suffered a huge blow with Caleb Ewan withdrawing from the road race.

Ewan, described as the “fastest man in the world” by teammates such as Luke Plapp, underwent surgery last Monday to remove a surgical plate from his collarbone – which was inserted after he crashed at the 2021 Tour de France.

AusCycling had hoped that Ewan would be able to compete despite the surgery.

But unsurprisingly on Friday they announced that the star sprinter would not start the road race in Warwick after it was “apparent” he was unable to race.

“I’m devastated that I won’t be able to represent Australia in the green and gold this weekend, but after talking with my doctors it’s clear that I need to make the difficult decision to prioritise my health,” Ewan said.

“I’ll be watching the race on television and hoping the team can get the job done for Australia.”

It is a huge blow for Australia with Ewan widely expected to fight out with the Isle of Man superstar Mark Cavendish over the 160km flat course.

Australia’s second best chance, young gun Kaden Groves, pulled out of the race a couple of weeks ago because of pro team commitments.

It means Rohan Dennis, who won the individual time trial, Luke Durbridge, Luke Plapp, Miles Scotson and Sam Fox will be tasked with continuing Australia’s dominance on the road after a clean sweep in the time trial.

All three Aussie women’s 1m springboarders are through to this morning’s final after breezing through the preliminary round.

Esther Qin, who won bronze in this event at the Gold Coast Games, had the third best result in the preliminary round, scoring 266.95.

Georgia Sheehan, back in the green and gold after taking time out of the sport to deal with burnout and mental health issues, took out fourth spot.

Brittany O’Brien, a former platform diver who switched to springboard to reduce the toll on her body, qualified through eighth.

Sam Fricker and Shixin Li are up next in the men’s 3m springboard synchronised finals.

SPRINT TEEN FREAK WE’LL BE TALKING ABOUT IN 2026

While all eyes were on the track in Birmingham, Australia’s next Commonwealth Games star emerged more than 8000km away.

The 18-year-old, who was already considered one of the fastest teens Australia has ever produced, ran what was described as the “race of his life” in Cali, Colombia.

He finished behind only Blessing Akawasi Afrifah (Israel) and Lesile Tebogo (Botswana), who both recorded times of 19.96 secs.

That mark was a new championships record and would have beaten the Commonwealth Games record of 19.97 set by Frankie Fredericks in 1994.

Law’s time set a new personal best and strengthened his claims as one of Australia’s top sprint prospects after reaching the semi-finals in the 200m of the recent World Athletics Championships.

Law finished 21st in the world in the Eugene event.

He has previously run in the 100m but withdrew to focus on the 200m.

After setting a new PB in the semi-final, he told Athletics Australia: “I did what I wanted to do, and now I’m there. I was planning to run faster than that but the rain delay felt like three hours, I had a little nap until about 30-minutes to go. I’m just relaxed naturally, I don’t put too much pressure on myself because it takes too much energy.”

The final was slower than the semi-final due to a headwind.

FAMILY FEARED FOR THEIR LIVES DURING CYCLING CRASH

The family involved in the horror cycling crash at the Commonwealth Games feared for their lives.

The shocking accident came in the men’s scratch race when England’s Matt Walls collided with other riders at high speed and flew over the barriers and into the crowd.

Cycling fan Hugh Colvin was spectating alongside his two children — aged five and seven — and a few family friends, when Walls catapulted over the barrier.

Colvin’s wife Laura was not at the velodrome but she described the terror: “What has been hard for us to get our head around is how close this came to being a complete catastrophe.

“And how close our two younger children came to being seriously injured or killed. And that has been the main thing we’ve had to reflect on over the last few days.”

Colvin himself said to the BBC: “It all happened so incredibly quickly at the speed the cyclists were going.

“You can see the trajectory of the bike, it came through, grazed my daughter’s shoulder, and one of the photos you can see we are obviously underneath the wheel.

“Looking back at the photos it must have been within centimetres, millimetres, of our heads.”

Early reports from a Birmingham 2022 spokesperson said three riders went to hospital and two injured fans only required treatment by medics on site.

However, one of the family friends did go to hospital, Mrs Colvin said: “He suffered a laceration to the bone which the hospital have described as being like a machete injury.

“He’s still waiting for surgery. It is the start of a long road to recovery for him.”

She also revealed that Walls video-called her children to help them come to terms with what happened.

A rugby fan caught the BBC cameras by surprise by twerking as she was filmed in the crowd during the Commonwealth Games.

The Rugby Sevens action was interrupted as one fan showed off her dancing — and her bum.

Cameras picked up three women enjoying their day out in Coventry at the Commonwealth Games.

But as the fan in the middle spotted herself on the big screen, she seized her moment with both hands.

After taking a swig of her drink, the supporter stood up and turned her bum to the camera before starting to twerk.

While her friends were left in hysterics by the X-rated performance, the BBC team was caught completely off guard.

The stunned BBC commentator said there is “plenty of dancing” going on in the crowd, before the cameras quickly cut away and back to the match action.