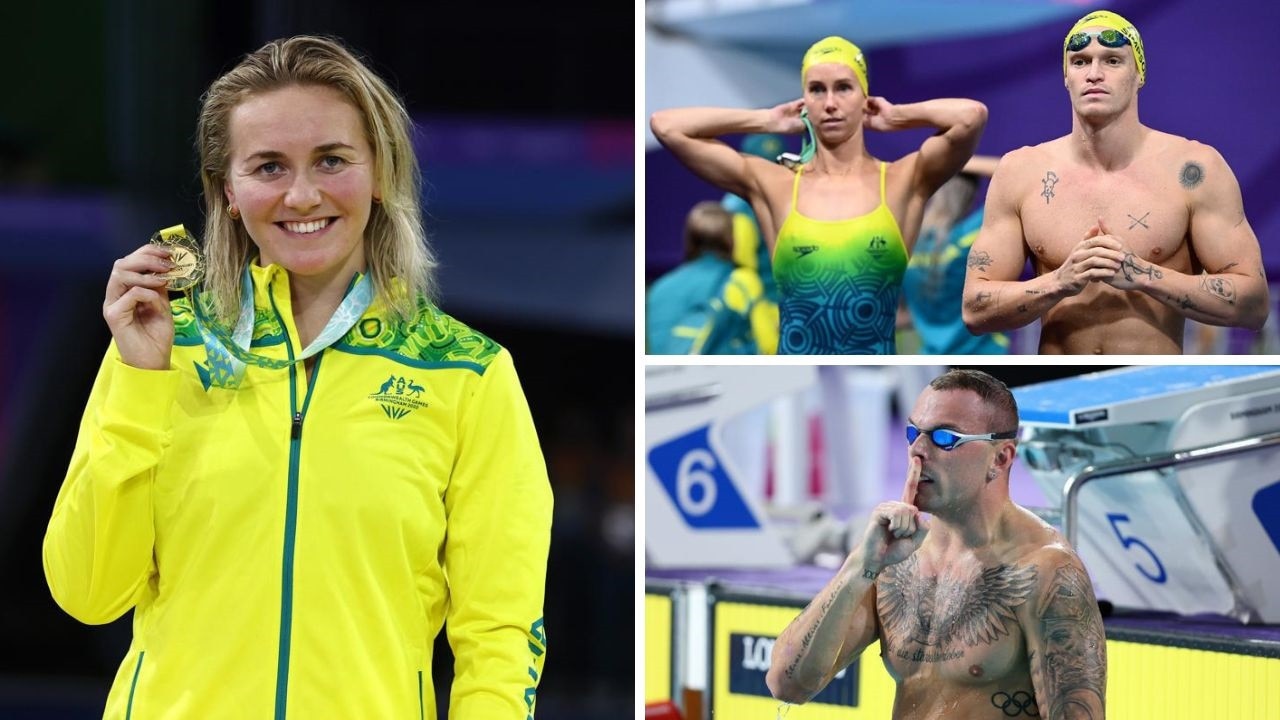 Ariarne Titmus has said the focus on the so-called swimming “love triangle” at the Commonwealth Games was taking its toll on the entire squad.

“It’s affecting us emotionally,” she said on Channel 10’s The Project on Thursday.

The Aussie team’s success in Birmingham has been overshadowed by speculation about relations between Kyle Chalmers, Emma McKeon and Cody Simpson.

Chalmers and McKeon dated for a few months. Their relationship first became common knowledge in September.

But it was revealed in May that Simpson and McKeon had become a couple and had even moved in together during a training camp.

Rumours of bad blood between the three surfaced when sprint king Chalmers and Olympic legend McKeon avoided each other as the 4x100m mixed relay team celebrated their gold medal swim on the pool deck and during the medal presentations on Saturday morning.

Aussie swimming great James Magnussen described the sight of McKeon and Chalmers politely keeping their distance from each other as “awkward”.

Chalmers was the only member of the Aussie team that didn’t walk up to the starting blocks to congratulate McKeon after she touched the wall to finish off the relay victory. The pair also never embraced as they conducted TV interviews and left the pool deck. However, McKeon was the last swimmer out of the pool and had to catch up to her teammates.

All three have said there is no friction between them at all.

Swimming legend Titmus appeared on The Project on Thursday after picking up four golds in the pool and helping break the world record in the 4x200m freestyle relay.

She was asked if the “love triangle” was hurting the team’s performance.

“We all certainly hear about it and it’s affecting our teammates so it affects us emotionally,” she told host Georgie Tunney.

“But I think we try to block it out. We’re such a close unit and we want to have each other’s backs and I think we did that this week.

“We want everyone to be happy and not going through those things so it did affect us but we certainly got through it.”

Titmus said she was “low key confident” she would nab the four golds but was nonetheless elated at her win.

“It’s crazy. I feel really proud and I’m so happy,” she told the hosts.

Grant Hackett revealed earlier this week that the trio at the centre of the love triangle had sat down together over the storm that has swirled around them at the games.

He said media frenzy had indeed had an impact on the three swimmers, who all wanted to move on from it as soon as possible.

“They’re professionals, they’re teammates, they get along with each other, they respect each other where they need to, and they go out there and they execute performances for the country and they support one another,” he said on Nine’s Today Show.

“This was a story that was back at the Commonwealth Games trials a couple of months ago, and the three of them put it to bed.

“Kyle’s come out very openly and said, this is a bunch of rubbish,” Hackett said.

“No one had any problems. They couldn’t believe the fuss around it.”

Meanwhile Simpson’s mother said she believed the swimmer is more than equipped to deal with the media scrutiny.

“I think he has been lucky because he has had so much history with press and media before, performing on stage for thousands of people,” she said on Wednesday morning AEST.

“I think the pressures of what he has dealt with in camp and at the Commonwealth Games has been pretty easy for him.

“It has given him an advantage to deal with a lot of those pressures and not let that stuff bother him.”