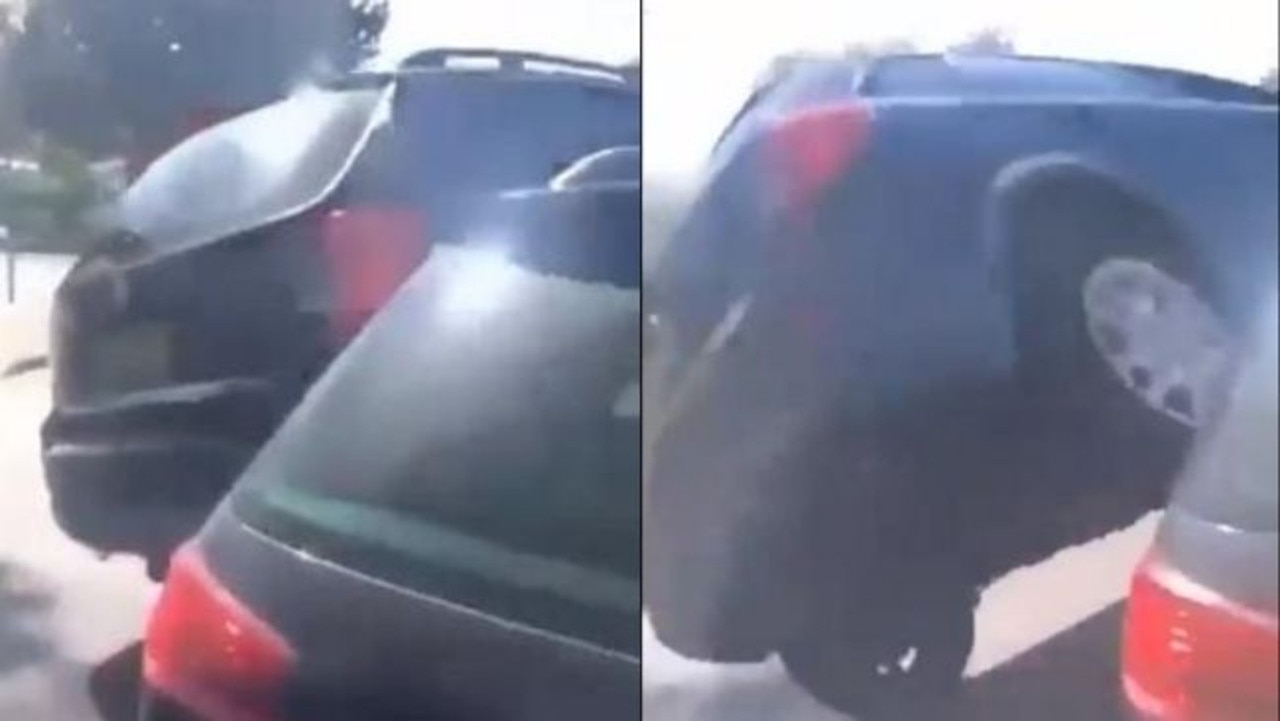 A driver has been charged after startling footage emerged of a fiery confrontation where a vehicle ended up on top of another car.

Police have confirmed the driver of a black SUV will be charged with negligent driving after a fiery confrontation on a Canberra road ended in a stunning collision.

The bizarre scenario involved one woman’s vehicle accidentally mounting another car. The incident occurred on Saturday morning and was shared to social media on Sunday, shocking viewers.

In the video, the woman filming points the camera at a black Holden behind her at a set of lights.

“What are you doing?” she asks the other driver pointing the camera at her.

“What are you doing… get the f**k out of Canberra and go get a job and find something better to do,” the female driver of the black car replies.

“Honey you just reversed into me.”

“I’m sorry we are at a traffic light,” the first woman shoots back.

After some more back-and-forth and name-calling, the Holden driver attempts to take off, partially mounting the other car leaving her stranded on top of the vehicle in front of her.

Another voice is heard saying, “I’m so sorry”.

“You f**king idiot, you are f**ked,” the woman filming shouts at the Holden driver. She replied: “You better call a tow truck”.

Witnesses to the event said it occurred just around the corner from where the Convoy to Canberra protesters have taken up residence at the EPIC Showgrounds.

In a statement, ACT Policing confirmed the incident occurred at around 10am in Watson, in Canberra’s north.

“Police spoke to both drivers and confirmed there were no injuries as a result of the collision” a police spokesperson said.

“Enquiries relating to the incident occurred today and the driver of a black SUV will be issued an infringement for negligent driving.

“ACT Policing urges all drivers to remain patient on our roads and to drive safely.”

It’s understood the confrontation was related to the protests, but authorities could not confirm if the clash was between a Convoy to Canberra supporter and a Canberra resident, as it is played off in the video.

The video, which has been shared widely within the group’s social media and telegram page, was not attributed to a source.

The Convoy to Canberra protest has seen thousands of anti-vaxxers descend on the capital to protest the Australian government vaccine rollout. Up to 10,000 of the group were told by ACT police on Saturday they needed to move on within the next 24 hours.

The group has been gathering at the nation’s capital for the past two weeks, with the main focus on Saturday at Parliament House where people arrived after a march in the morning.

One man was arrested after he breached a fence and ran onto the forecourt area, with police quickly tackling him to the ground.

Two other people were also arrested during the protest, police revealed.

“One man was charged with multiple offences after he drove his truck through a roadblock and two men were taken into custody for breaching the peace,” a ACT Police spokesman said.

Lifeline Canberra decided to close the doors to its book fair to keep its staff and patrons safe during the protest.

The Capital Regional Farmers Market was also cancelled due to safety concerns and logistics for customers.