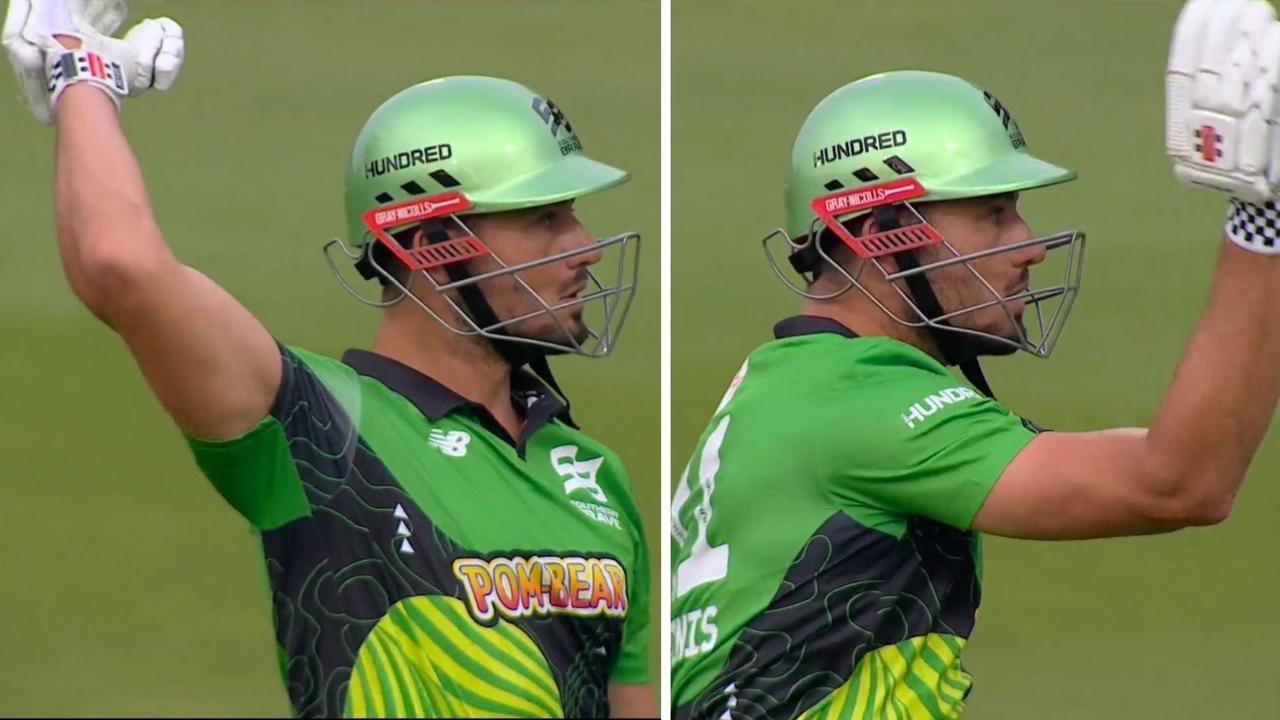 Australian cricketer Marcus Stoinis has sparked fury after seemingly accusing Pakistan paceman Muhammad Hasnain of having an illegal bowling action during the Southern Brave’s seven-wicket loss to the Oval Invincibles.

Stoinis top-scored for the Brave on Sunday evening, dismissed by Hasnain for 37 (27) after sharing a 55-run partnership with captain James Vince for the second wicket.

Watch The Hundred. Every Match Live & Exclusive to Fox Sports on Kayo. New to Kayo? Start your free trial now >

The 32-year-old all-rounder attempted to slap a 142km/h short delivery down the ground, instead gifting England’s Will Jacks a regulation catch at mid-off.

But as Stoinis made his way towards the pavilion, he implied the 22-year-old’s bowling action was illegitimate by miming a chucking motion – a not-so-subtle jab at his recent suspension from the sport.

In February, Hasnain was found guilty of having an illegal bowling action after a Big Bash League umpire reported him during the Sydney Thunder’s victory over the Adelaide Strikers.

Hasnain underwent biomechanics tests in late January, with the findings from the Lahore University of Management Sciences confirming his action breached the ICC’s 15-degree limit for elbow extension.

The Pakistani quick has since been declared fit to bowl again after undergoing remedial work, and Stoinis could face disciplinary action for the misdemeanour.

The Age’s Daniel Brettig tweeted: “This is poor. There‘s a system in place to regulate bowling actions and it doesn’t include publicly questioning your opponent’s integrity.”

The Times’ Elizabeth Ammon posted: “Wonder if Stoinis will be in trouble for this implication.”

Stoinis is not the first Australian cricketer to accuse Hasnain of chucking; during last summer’s second Sydney Smash contest at the SCG, Sixers captain Moises Henriques yelled, “Nice throw, mate” to Hasnain after he unleashed a bouncer.

“Right from the first game he played and through to the tournament, it seemed that there was a few question marks there,” Henriques told reporters at the time.

“I didn’t have the protractor out.

“I guess from my point of view, we knew already it had been reported. I feel like the umpires are a little bit hamstrung in terms of what they can actually do on the cricket field, because they’re so worried about backlash and public opinion.

“I could definitely argue that what he was doing was not in the spirit of the game.

“And I also agree that possibly I got a little bit emotional and frustrated and I was a bit overt with my comments out in the middle. But you know, I called a spade a spade and that was my opinion.

“As long as he’s playing within the rules of the game that everyone else has to abide by.

“Good luck to him. It looks like he could have a long future if that all gets sorted.”

Hasnain has represented Pakistan in eight ODIs and 18 T20Is since making his international debut in 2019, taking 29 wickets at 33.68.

The Invincibles chased the 138-run target with 18 balls to spare on Sunday, thanks largely to a blistering century from Jacks – the second hundred in the competition’s short history.

The 23-year-old smacked an undefeated 108 off 48 deliveries at The Oval, clearing the boundary rope on eight occasions.

Hasnain finished with figures of 1/27 off 15 deliveries, while Invincible teammate Reece Topley claimed 3/24 to help restrict the Brave to 6/137 from their 100 balls.

Elsewhere, Australian superstar Glenn Maxwell scored an unbeaten 43 (25) and snared a wicket in the London Spirit’s victory over the Northern Superchargers in Leeds.

The Brave will next face the Manchester Originals at Southampton’s Ageas Bowl on Friday morning AEST, with the first ball scheduled for 4pm.