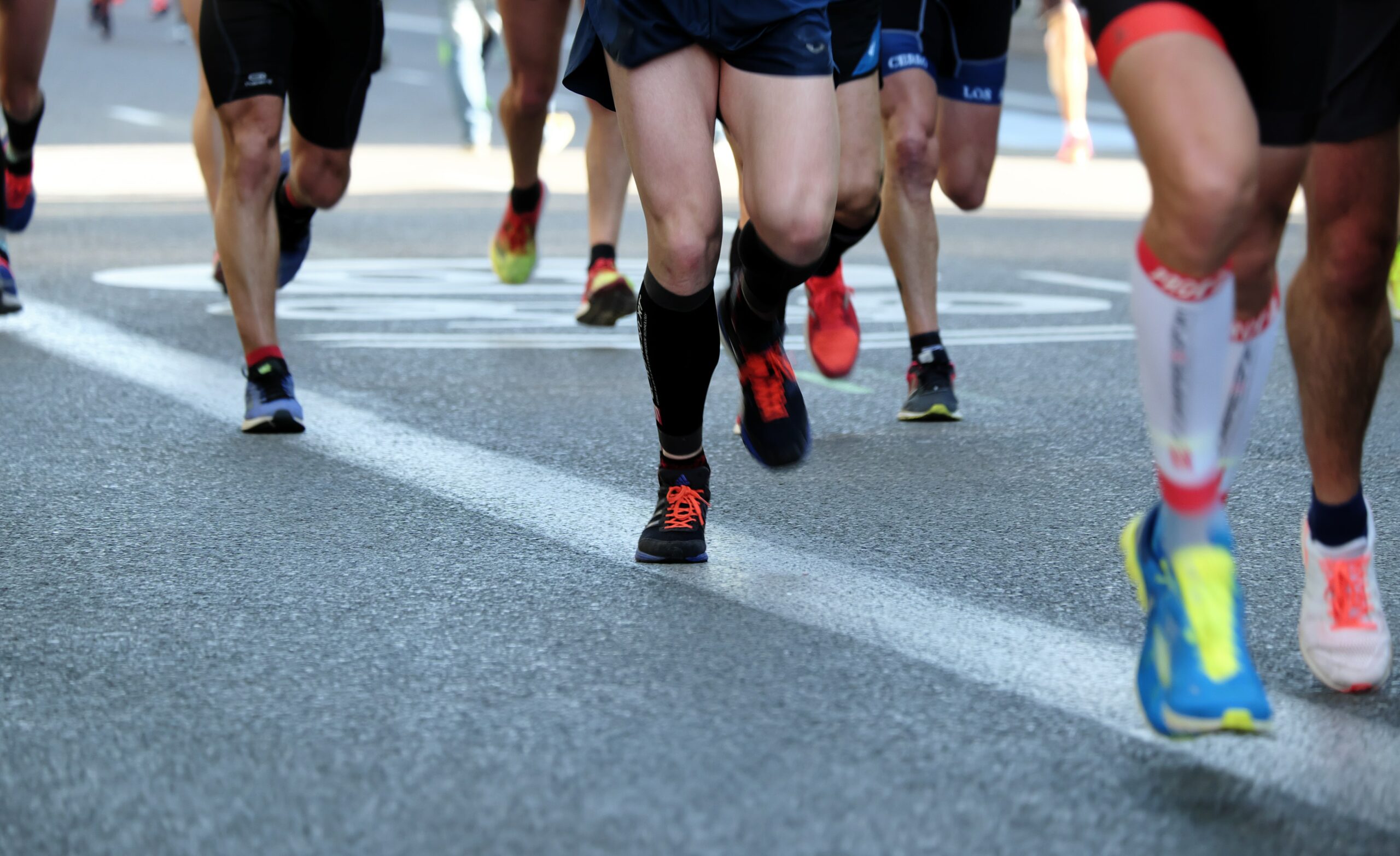 Sports medicine specialist John Hill, D.O., 64, has run since high school. So even after rheumatoid arthritis forced him to have knee replacement surgery in 2011, he continued logging kilometres. Over the next six years, he ran at least one marathon a year and multiple ultra marathons.

Meanwhile, 45-year-old nurse Kim Danchus never had much of a fitness routine—in part because a fall down a staircase at age 25 shattered the top part of her tibia and left her walking with a limp. She had her knee replaced in 2009 and started running soon after. In May 2017, she crossed the line at the Mainly Marathons half marathon in Fulton, Illinois, to complete her quest of finishing a half marathon distance in all 50 states. (She also has one marathon under her belt.)

Clinical guidelines and most surgeons advise patients who have undergone total hip or knee replacements to avoid high-impact activities like running. The harder patients are on the devices, made of metal and plastic, the sooner they’ll need risky and often less successful revision surgery, most say.

Yet when Hill’s surgeon recently removed the plastic part of his artificial knee during treatment for synovitis—an inflammation of the joint lining linked to his rheumatoid arthritis—he found only a single scratch. “Everybody was pretty shocked,” Hill says. Were it not for the complications of his autoimmune disease, he believes he’d likely have been able to keep the same knee for 30 years despite his heavy-duty mileage.

“It’s certainly a controversial topic, but basically, this is just a legend that’s been passed down from year to year that you shouldn’t run on them,” says Hill, who’s also a professor at the University of Colorado in Denver. “The actual evidence really isn’t there.”

The decision to start running after a knee or hip replacement, like the choice to have surgery in the first place, requires an individualised conversation between doctor and athlete, he notes. And as more younger people receive artificial hips and knees, these discussions are taking on a new tone—and as Hill and Danchus demonstrate, many patients emerge in running shoes and race bibs.

Although there are of course exceptions, most people undergo hip or knee replacement surgery as a treatment for osteoarthritis. This age-related degeneration gradually destroys the cartilage between joints. Contrary to popular belief, running alone doesn’t cause arthritis. Research has shown no link between the two—and there’s even some evidence running reduces inflammatory processes that lead to joint problems.

Sports injuries like ACL or meniscus tears earlier in life, however, can hasten the onset of arthritis. Genetics and body weight also play a key role—the heavier you are, the greater the strain on your hips and knees with every step, says Lily Bogunovic, M.D., a sports medicine orthopaedic surgeon at the Orthopaedic Associates of Wisconsin.

Once arthritis begins, doctors typically try conservative treatments first, including exercise (such as swimming, walking, or stretching and flexibility exercises, if running hurts), hot or cold therapy, and anti-inflammatory medications. Only when the pain becomes unbearable or severely limiting do patients decide to go under the knife.

Few have expected to become athletes on the other side of surgery.

But Joseph Zeni, Jr., P.T., Ph.D., a professor and researcher in the Department of Rehabilitation and Movement Sciences at Rutgers University, has noticed a shift. As surgical materials and techniques have improved, the range of patients receiving joint implants has widened and includes more younger, active people.

“The target of rehabilitation traditionally had been: We’ll get you walking, we’ll get you moving along without pain, but not returning to any high-level activities,” he says. “But now, we have seen patients in the clinic saying, ‘I want to go back to running.’”

In part because of the novelty of the concept, research on how running affects the wear of artificial joints is difficult to come by. Plus, scientists can’t randomly assign some people to run after surgery and some to stick to walking. Instead, they have to do retrospective studies, where post-operative patients report on whether or not they’ve had revisions and what they’ve done in the intervening time.

What little evidence there is largely focuses on hips. One Japanese study found that of the small percentage—3.8 percent—of patients who ran after total hip replacement, none experienced any sign of damage to the implant a year later. However, another French study assessed patients an average of 11 years after total hip replacement and found 14 out of 70 who ran or did other high-impact sports required revision surgery, as compared to 9 out of the 140 who stuck with low-impact activities.

That study also asked people to rate how well they functioned after surgery; those who did high-impact sports gave themselves better scores. “There’s potentially a trade-off for being able to do more and being more satisfied with the outcome, but then the downside of that is having a greater risk for revision in the future,” Zeni says.

That’s a risk Danchus was willing to take. Due to her age at the time—33—her surgeon told her she’d likely wind up needing a new joint eventually anyway (running or not, most artificial joints have a lifespan of about 10 to 15 years, though newer materials may last longer). So when she asked about starting to run, he told her he saw no reason to hold back.

“Before my replacement, I really couldn’t do anything of that sort. Even just getting up and sitting down was painful,” she says. “My motivation was just a second chance at having a normal knee.”

Faced with the same set of facts, others may make a different decision. There’s no one right answer as to what activities are safe post-surgery, Zeni and Hill say. Both recommend having a conversation about your goals and expectations before you reach the operating room for a procedure that’s not reversible.

In some cases, you might be a candidate for a less-than-total joint replacement. Partial replacements of the hip or knee can leave more natural tissue intact, which absorbs more of the force from impact and can make revision surgery easier should you require it, Zeni says. Another technique, called hip resurfacing, involves capping the head of the femur with metal rather than completely removing it. Most doctors have no problem with patients running after that type of procedure, Bogunovic says.

Kay Glynn, 67, thought her career as a masters track and field athlete was over when her doctor told her she needed two total hip replacements. Fellow athletes responded to her heartfelt farewell post on a track and field forum with a referral for a second opinion. Glynn had two hip resurfacing procedures instead, in 2013 and 2016. She swept the jumping events at the 2017 National Senior Games in Birmingham, Alabama, winning her age group in the pole vault, high jump, long jump, and triple jump.

A little research can lead you to the best combination of doctor and device for you. Start by asking your orthopaedic specialist or primary care sports doctor for a recommendation. Hill advises finding a surgeon who treats athletes and operates mainly on hips and knees rather than a wide range of joint types. That specialisation often means improved technique and alignment, which may reduce your risk of loosening or wear, he says.

You can also take steps post-surgery to reduce the risks associated with running, such as considering a gait analysis to identify and correct issues with your biomechanics and asking your surgeon about regular X-rays to monitor the wear rate and positioning of your implant, according to Hill.

Maintaining your fitness, including with weight-bearing activity, keeps muscles strong and stimulates new bone growth that can reduce the risk of artificial joints loosening, Hill says. Even if you don’t continue running, there’s cycling, hiking, weightlifting, and a wide range of other activities you can do, Bogunovic points out. In fact, she herself transitioned from marathons and triathlons to CrossFit and rowing because of a knee injury that knocked out much of her cartilage.

“I physically could go out and do it—but I would accelerate the rate at which my knee would fall apart and time at which I would need to have a knee replacement,” she says. “If you’re just a little bit creative and open-minded in terms of what activities you can do, you can stay active and healthy.”