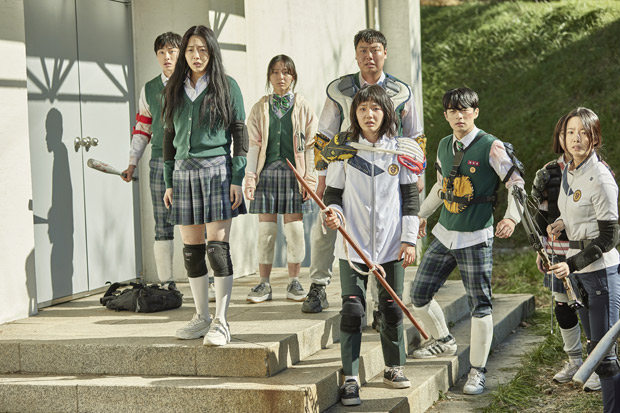 The stage gets more excited whenever a zombie outbreak hits. The latest South Korean thriller All Of Us Are Dead can be called a fast and gory attempt of Netflix following the stupendous success of Kingdom, Squid Game, and Hellbound. The only difference of the menace this time is runaway virus. The symptoms are very much similar to the 2016 zombie outbreak of Gong Yoo starrer Train to Busan.

The 2022 drama starring Park Solomon, Park Ji Hoo, Yoon Chan Young, Ju Yi Yu Hyun and Yoo In Soo, is the adaptation of webtoon Now at Our School by Joo Dong Geu. It is focused in a high school in a suburban city where a student with strange symptoms is discovered. A mysterious virus begins to spread, and it quickly spirals out of control, moving beyond the school to seep into every nook and cranny of the entire city. As more and more people become infected, the authorities declare a state of emergency. They place the city under a lockdown amid an unprecedented event: the spread of a deadly zombie virus throughout a school and beyond. A group of students — On-jo (Park Ji Hoo), Cheong-san (Yoon Chan Young), Nam-ra (Cho Yi Hyun), Su Hyeok (Lomon) and others — find themselves in the appalling situation of watching their close friends turn into zombies. They struggle to remain alive at the school, a safe haven that has now turned into a bloody battleground. Without phones, without food, and without grown-ups to protect them, they wait for the rescue team to arrive. With dangers lurking at every corner, they must join forces with one another in a desperate fight for their lives.

So if All Of Us Are Dead is on the watchlist, the following zombie dramas will surely keep you on the edge of your sofa and make your heart race in suspense:

The 2021 Park Hyung Sik, Han Hyo Joo and Jo Woo Jin starrer drama revolves around a deadly new strain of a virus which spreads throughout the city. The house owners of apartment building have to remain in quarantine to survive in their new habitat fearing both the virus and the potential conflicts between disparate social groups. Yoon Sea Bom (Han Hyo Joo) has good judgment allowing for quick decision making is determined to live comfortably in a complicated world. Detective Jung Yi Hyun (Park Hyung Sik), primarily in charge of violent crimes, now struggles to keep the apartment residents safe.

Song Kang, Lee Si Young, Lee Do Hyun, Go Min Si and Park Gyu Young starrer 2020 drama is the adaptation of webtoon of the same name by Kim Kan Bi and Hwang Young Chan. Following the death of his family in an accident, loner Cha Hyun Soo (Song Kang) moves to a new apartment. His quiet life is soon disturbed by strange incidents that start occurring in his apartment, and throughout Korea. As people start to turn into monsters, Hyun Soo and the other residents try to survive. The sequel is also confirmed to be under development.

The 2019 Ju Ji Hoon, Bae Doo Na, Ryoo Seung Ryong, Kim Hye Jun and Kim Sang Ho starrer horror thriller revolves around Joseon-era Korea where a mysterious plague befalls, bringing the dead back to life as a result. No sooner does the Joseon King succumb to smallpox, do the rumors of his death begin. The Cho Clan, the clan of the pregnant Queen and her father, Chief State Councillor Cho HakJoo, declares the Crown Prince a traitor.

&KINGDOM: ASHIN OF THE NORTH

Questioning the circumstances surrounding the King’s death, the Crown Prince and his guard, Moo Young, set forth to locate Lee Seung Hui, the last physician to treat his father. But the two end up stuck with Assistant Physician Seo Bi and a mysterious man named Young Shin in a village plagued with a terrifying disease. Following the events in season one, waves of the undead threaten to reach the capital. In an attempt to save the people during the plague and regain his right to the throne, Crown Prince Lee Chang pursues Jo HakJoo to overthrow him, while the Queen is in an a race against time to produce an heir to the throne.The sequel stars Jun Ji Hyun and Park Byeong Eun as well.

The 2016 Gong Yoo, Jung Yu Mi and Ma Dong Seok starrer hit film is about Seok Woo (Gong Yoo), his estranged daughter Soo An (Jung Yu Mi), and other passengers who get trapped on a KTX train (high-speed train) heading from Seoul to Busan when a sudden zombie apocalypse breaks out in South Korea. Stuck inside the train, the pair must fight to stay alive no matter the cost. This is one of the mist recommended zombie dramas ever from the Korean entertainment industry.

Peninsula takes place four years after (2020) the zombie outbreak in Train to Busan. Sequel to the award-winning 2016 film, the Korean peninsula is devastated and Marine Captain Jung Seok, a former soldier who has managed to escape overseas, is given a mission to go back, retrieve a food truck containing $20 million and unexpectedly meets survivors. The film stars Gang Dong Won, Lee Re, Lee Jung Hyun and Koo Kyo Hwan.

In the Park JuHyun, Choi Jin Hyuk, Kim Yo Han and Kwon Hwa Woon starrer 2020 drama,  a zombie and a former TV writer team up to solve crimes in this thrilling drama that explores what happens when someone actually comes back to life. After being secretly buried on a hill, Moo Young (Choi Jin Hyuk), comes back to life as a zombie thanks to illegally dumped medical waste. With his memory gone, he eventually accepts reality and does whatever he can to walk and look like a human. Luckily, his peculiarly developed sense of smell allows him to position himself as one of the prominent businesses in the field of private investigation, finding the bodies of those who are reported missing. Sun Ji(Park Ju Hyun), who once was a writer for a TV show that deals with issues regarding current affairs, is employed as a part-time assistant at Moo Young’s agency. the unlikely pair team up to solve crimes, all while Seon-ji helps Moo-young recover his lost memories prior to being a zombie.

THE ODD FAMILY: ZOMBIES ON SALE

The 2019 movie stars Jung Ga Ram, Kim Nam Gil, UhmJi Won and Jung Jae Young. The story is about Man Deok (Park In Hwan) who has three adult children: Joon Geol(Jung Jae Young), Min Geol(Kim Nam Gil), and Hae Geol(Lee Soo Kyung), runs a gas station in a peaceful country village. One day, a strange man appears in the country village. Due to him, Man Deok’s family and the entire village is shaken.The strange man is later revealed to be a victim of the illegal experiments aimed to create zombies. Despite the clear dangers, the villagers take in the lone undead and find a way to profit off him.

The 2018 Hyun Bin, Jang Dong Gun, Lee Sun Bin and Seo Ji Hye starrer film is set in the Joseon dynasty. Prince Lee Chung (Hyun Bin) was held hostage to the Qing Dynastyfor more than a decade. When his older brother and heir to the throne, Prince Lee Young, helps him return, his homecoming is cut short by a zombie plague that has spread around the kingdom. Together with his countrymen, Lee Chung fights to rid his homeland of the monsters running rampant at night.

As a grisly virus rampages a city, a lone man stays locked inside his apartment, digitally cut off from seeking help and desperate to find a way out. The 2020 South Korean zombie film was directed by Cho Il Hyung which starred Yoo Ah In and Park Shin Hye in the lead roles.