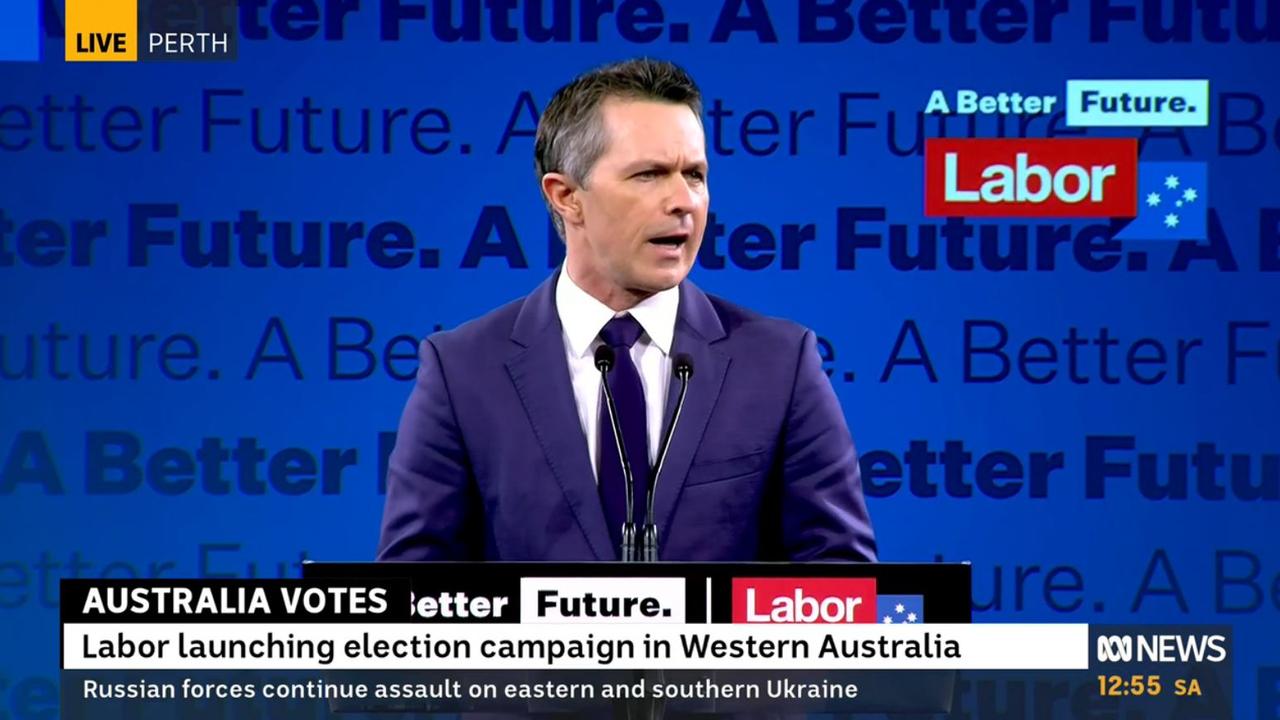 Anthony Albanese is launching the Labor campaign in Perth. But two former prime ministers were the first to receive an applause.

Welcome to our coverage of the Labor campaign launch in Perth.

In front of a packed conference room inside Perth’s Optus Stadium, Anthony Albanese will outline his party’s vision for the future and drop several key policy announcements.

His shadow cabinet was greeted with rapturous applause from hundreds of Labor diehards in red T-shirts as they walked out to Kylie Minogue’s Can’t Get You Out of My Head.

Before the main man showed up, the audience was clapping along to Jimmy Barnes’ Working Class Man in excitement, before an Indigenous music performance.

During the welcome to country, special mention was made of former Australian prime ministers Paul Keating and Kevin Rudd.

Noongar woman Sandra Harbin thanked the former leaders for “starting the healing of our country”.

The crowd gave loud cheers as they discovered former Prime Minister Kevin Rudd and Paul Keating were in the room, but the loudest cheer of the day was for the “state daddy” himself WA Premier Mark McGowan.

When McGowan hit the stage he claimed to be completely “in-synch” with Mr Albanese — so much so that rattled off a list of similiarities that had the Labor faithful in stitches.

“It’s not just about delivering affordable TAFE or more local manufacturing,” he said. “It runs much deeper than that.

“We both caught COVID on the same day. We are both proud poodle owners – his is Toto, mine’s Georgie.

“Both of us have been on a diet for some time, and lost a fair bit of weight…

“But, no matter how hard we work at it, neither of us look like Peter Malinaskus!”

Senator Penny Wong also took to the stage to give a gushing speech about the Labor leader – calling him the man who “embodies hope”.

“The Albo I know is a man of courage and conviction. The most steadfast of friends. The toughest of fighters. And the kindest of hearts. I know no-one braver for his cause,” she said.

“No-one more reliable when you need him. He will stand with you when it is easy and when it is hard. Because he is driven by belief and compassion and integrity.”

He slammed the PM for “flying off to Hawaii when our country was on fire” and thinking he could “fix it with a forced handshake.”

He also accused the PM of “leaving Aussies on their roof to escape the floods, forced to hire their own helicopters.”

“It happened again this week when the worst inflation results in 20 years came out. Inflation is through the roof. Real wages through the floor. And now, interest rate rises are knocking on the door. Life is getting harder. Not easier,” Mr Clare said.

He also alluded to the PM’s notorious welding video, saying, the country had “a Prime Minister who thinks his job is to dress up pretending to do other people’s jobs.”