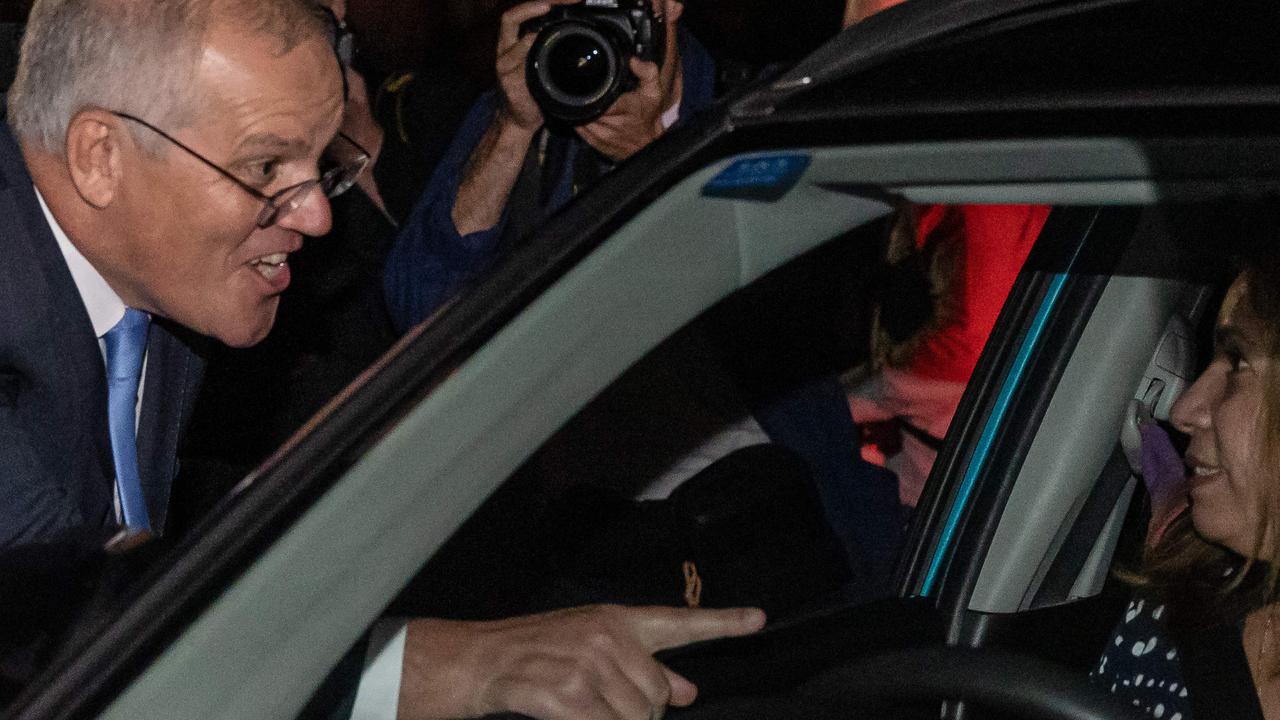 Scott Morrison is on the campaign trail on the NSW south coast but it was an adoring fan that caught his attention. See the moment.

Scott Morrison may have been dodging leadership questions as he conducted TV interviews on his first election stop on the NSW south coast but it was an adoring fan that caught the attention of the Prime Minister overnight.

While Mr Morrison was confronted by frustrated locals while visiting the Edgeworth Tavern in Lake Macquarie last week, it was a different story in Nowra.

As the Prime Minister was about to face the cameras for interviews with the ABC and SBS, Mr Morrison was spotted by a fan from her car, who subsequently yelled, “we love you, Scott”.

Pictures show Mr Morrison interacting with the woman, who subsequently revealed she was from “The Shire” – or Sutherland Shire region in Sydney – where Mr Morrison has roots as the MP Cook.

Mr Morrison landed in Nowra just before 4pm, where he spoke to media before a quiet night to hit the election trail today.

Appearing on ABC News from the region, when asked if the truth could be that Australians are tired of him, and not just politics, he deflected: “Well, it’s been a tough few years. People have been getting through the pandemic and Australia is now coming out of that pandemic with one of the strongest jobs records and strongest economic growth records amongst the advanced world.

“And so we now need to make a big decision, and that decision is to keep a strong economy, which means a stronger future guaranteeing the essential services Australians rely on or risking it all by going on a different path with a Labor Opposition whose economic record just doesn’t measure up.

When questioned again, he said: “This election is about the people watching right now. It’s not about any individual.

“It’s not about me or anyone else. It’s about you, who are watching, and your priorities, and ensuring that your job, your future, training for young people right across the country, the investment in the infrastructure that we’re delivering a stronger economy, delivering that stronger future.”

On Sunday, Mr Morrison Morrison announced Australia will head to the polls for the 2022 federal election on May 21.

Labor leader Anthony Albanese starts the election campaign as the clear favourite according to the latest Newspoll but there’s some worrying signs for the ALP’s primary vote.

An exclusive Newspoll conducted for The Australian on the eve of the campaign also reveals that the gap between the Liberal Party and the ALP is tightening.

Labor begins the election campaign with a two-party preferred lead of 53:47 which would see the Prime Minister lose 10 seats and government.

In a worrying sign for Anthony Albanese however, the latest Newspoll reveals Labor’s primary vote has now fallen to 37 per cent – a drop of more than 4 points just over a fortnight.