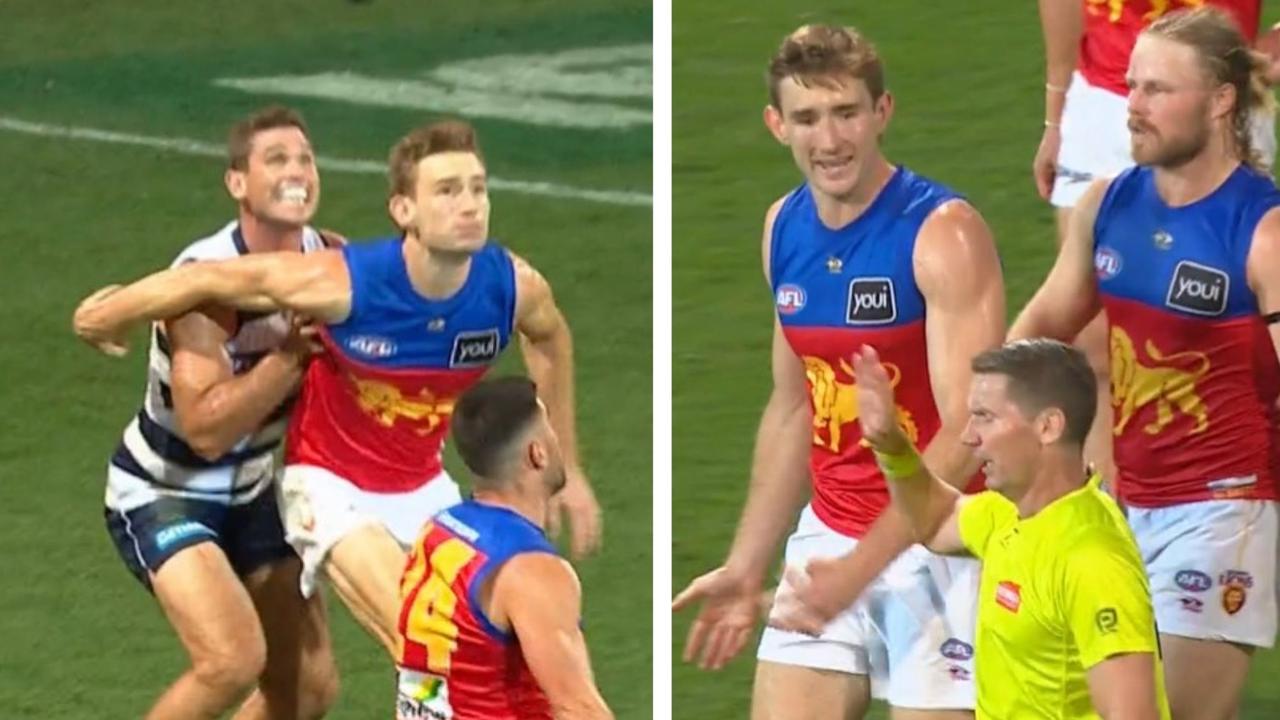 A heavyweight battle has gone down to the wire and given AFL fans everything they wanted — including a juicy controversy.

The sides traded goals from the outset, swapping the first 13 majors of the match, a streak only snapped when the Cats’ Quinton Narkle handed the Cats the biggest lead of the match (15 points) early in the third quarter.

The 13-goal streak was a record for the AFL, beating the previous mark of 12 set by North Melbourne and St Kilda in Round 22, 2017.

The 13-goal streak was a record for the AFL, beating the previous mark of 12 set by North Melbourne and St Kilda in Round 22, 2017.

But the Lions fought back and took the lead by a single point into the final quarter.

After trading goals again to start the final term, the Cats took a three-point lead when Tom Hawkins kicked his fifth goal which ultimately put the game to bed.

Hawkins, who had been given a contentious free kick in the third quarter for his fourth goal, appeared to push Harris Andrews in the back before taking the mark and kicking the goal.

The Lions star immediately protested but was told by the umpire “You’re both running forward and momentum took you forward, he’s held his ground”.

Andrews was flabbergasted but he was far from the only person.

Four-time premiership winner Luke Hodge said Andrews had every right to blow up.

“Oh boy. You can see why Harris Andrews was upset. He got one paid against him near the boundary line where he gave a little shove,” Hodge said. “That was clearly hands in the back.”

Richmond champion Matthew Richardson added: “I don’t know what else is in the back if that isn’t.

“Umpires explanation was that they were both moving forward – Harris was for one reason, he was pushed. It didn’t make sense that explanation.”

On SEN’s AFL Nation, the commentators were also stunned.

“That was a push too,” Anthony Hudson said.

“Harris Andrews is going bunta at the umpire,” Hawthorn legend Dermott Brereton replied. “How that is permitted (I don’t know).”

“The push in the back rule has become a farce,” he said. “How the umpires could miss that is beyond me, there was about three in the final quarter that was laughable.”

He said it brought back memories of round three 2021 at the Cattery when the Lions were cost dearly after Brisbane’s Zac Bailey tackled Geelong’s Mark Bicavs directly in front of the posts, which many argued was incorrectly disposing the ball with less than 30 seconds left. The Lions lost that game by one point.

On Triple M, Nathan Brown said: “Two hands clearly in the back. One of the great pushes of our time.”

Former West Coast star Will Schofield tweeted: “As much as it pains me to say, when it favours a forward, play on,” before backtracking, writing: “Seen it again. I take that back. That’s a shocker.”

ABC Brisbane Radio presenter Kelly Higgins-Devine added: “So, the push in the back rule doesn’t apply to Hawkins. Good to know.”

“That is an absolute shocker. Replay is an indictment on that decision.”

Speaking on ABC Sport, Hawkins said he felt the contests were fair game in the moment.

“They’re sort of the ticky touch wood and really hard ones to adjudicate,” Hawkins said. “I mean the push in the back rule has changed dramatically. Look I don’t know, I’d have to look back, in real time it felt OK.

“When you sit in front you play on big players, once you start moving, you’re vulnerable in front so it’s quite easy to shift … if that’s the position I find myself in, I just got to scrap and try create a contest and I felt I did it OK but who knows.”

Garrett Mundy wrote: “Not that you’d expect him to say anything else. But Hawkins is not responsible for the decisions the umpires refuse to make. He’s just playing to the whistle.”