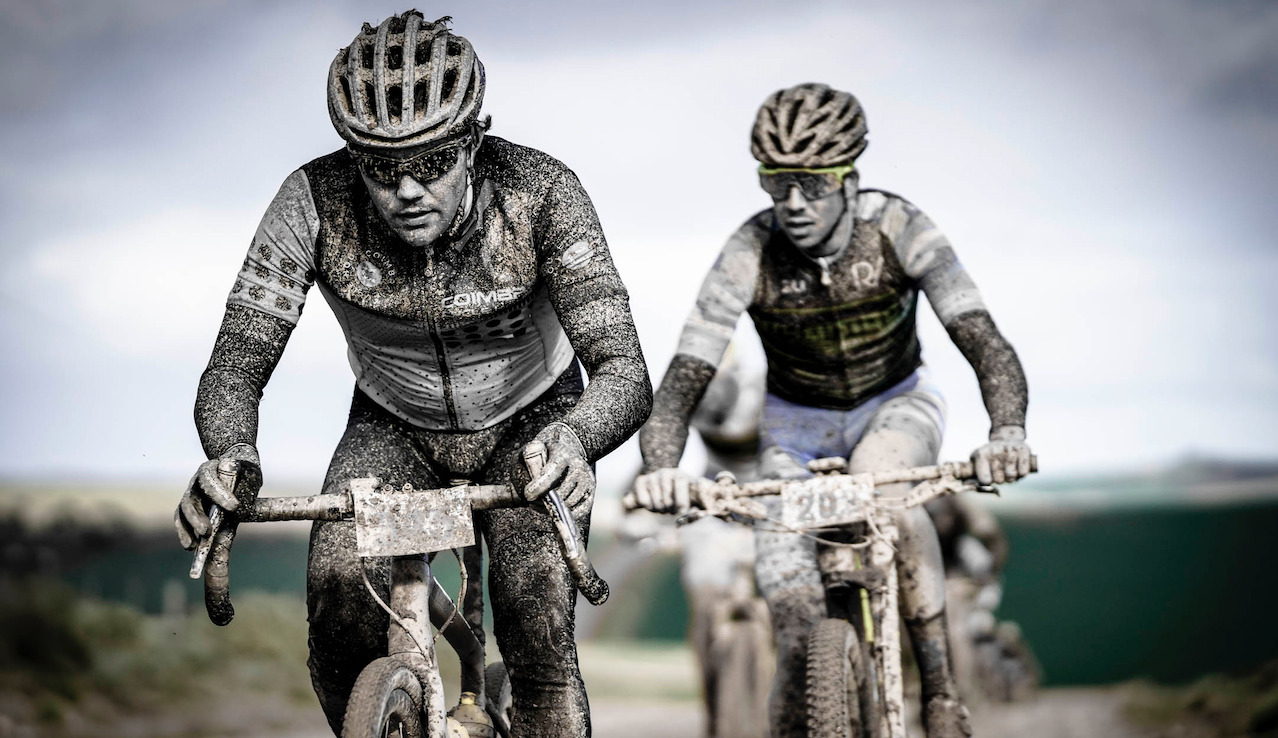 Grinduro!, a gravel event that has been going strong for seven years across the globe, came to Pennsylvania June 10-12, 2022. This edition marked the first time the popular event visited the East Coast, and Bicycling’s editors were excited to join the party.

For our US membership editor, Theo Kahler, it was his first time experiencing gravel riding. So, we asked him to write about his experience as a gravel newbie and share whether the much-hyped discipline lived up to his expectations.

While there are no Grinduro! events on the SA calendar (yet), we are spoiled for choice when it comes to silly-long, bring whatever bike you want events – just check out Around the Pot, Swartberg 100, Race to the Sun and Brewery to Brewery as a tiny selection fo gravel-centric options. Our race calendar has them all!

I still have a lot to learn about cycling.

As a recovering collegiate distance runner, I picked up road riding a year ago after dealing with chronic hip issues. Since then, I’ve strictly stayed on paved roads. But when I was offered the chance to ride Grinduro (and offered a BMC gravel bike to ride on), I was excited about the new challenge and opportunity to learn about gravel riding firsthand.

I knew the gravel community has a reputation for being accepting and non-judgmental, so I figured I couldn’t embarrass myself too much with my lack of experience. When I picked up the BMC URS 01 One, I soon realised the weekend was going to be a lot of “firsts” for me. Not only would it be my first time on gravel roads, but my first time riding disc brakes, electronic shifting, and a wide-range mountain bike cassette. I knew the BMC was ready for the task. After all, the URS is the top-of-the-line gravel bike offered by the Swiss brand and was named one of Bicycling’s Best Gravel Bikes for 2022.

I was confident I had the fitness for the full 70-mile (113km) route, but I was nervous my novice bike handling skills would not be enough for the steep downhills and narrow trails. Nevertheless, I packed my bags eager to grind some gravel.

On Friday afternoon, Bicycling photo editor John Hamilton and I set off for the mountains of central Pennsylvania in his stick-shift Mazda hatchback. We arrived at the Sullivan County Fairgrounds as everyone was preparing to pedal off for the 15-mile (24km) prologue, so we threw on our cycling kit quickly after we checked in. As I was leaving the fairgrounds, a rider with a video camera asked if I was “maxin’” or “relaxin’.” Unaware that this is the catchphrase for Grinduro events, I gave him a look of confusion. “Oh, you’re relaxing for sure,” he said.

The prologue took us up a gradual, but long climb to a rest stop overlooking the valley where we were camped. The view of the mountains caught me by surprise—the steep hills in the foreground contrasted with the misty valley in the distance—and it felt like I was looking at a Thomas Cole landscape painting.

I got my first taste of descending on gravel shortly after. As I concentrated on keeping my tires from sliding out from underneath me, gear editors Tara Seplavy and Matt Phillips flew past me with vigour. The road took us back to camp, where activities were waiting for us, including a rock skipping contest in the nearby creek and a bike frame toss contest (where Matt launched a retired Cannondale carbon frame onto a roof).

After changing back into civilian clothes, John and I set up our tents at the campsite and took it easy the rest of the night. This was my first time camping in 11 years and surprisingly, with the help of some melatonin, I slept well.

I woke up around 6 A.M. to my camping neighbours discussing tire pressure. The race started at 9 A.M., so I eventually meandered over to the breakfast station for some fuel (and wifi). I loaded up on pancakes, bacon, oatmeal, orange juice, half a biscuit, and some surprisingly good coffee before prepping my bike for the day. I crammed tire repair supplies into my purple bar bag, which matched the Grinduro race number I’d fashioned to it. I’d heard that the aid stations would be frequent and generous, but I threw a few Welch’s fruit snacks into my jersey for safety and filled up my two water bottles (one with a hydration supplement, the other with spring water we’d purchased at the petrol station).

I knew Grinduro had a reputation for being “chill” and casual, and I could tell during the hour leading up to the start. No one was sprinting down the roads warming up, no one had laser-focus poker faces, and no one was jockeying to be in the front row at the start. The competitive side of me was craving some pre-race nerves, but I tried to embrace the relaxed atmosphere.

I told myself that I was going to stay with the main pack throughout the race, but I couldn’t resist riding tempo up the first long climb. I caught up to the lead group and from there, yo-yoed behind them, joining them on flats and uphills but hanging cautiously off the back on downhills. I learned to keep my distance after smacking a pothole and ejected one of my water bottles, smashing the nozzle—I couldn’t bunny hop like the guy in front of me. Before the race, my dad told me to “descend like you just got your learners permit” since this was my first time riding on steep, non-paved roads. I mostly took his advice.

I rode the first timed segment, a four-mile “rolling time trial,” by myself, ultimately taking fourth place in the 30-and-under age group. I regrouped with the group at the first rest stop, and after eating a quick doughnut, we were back at it. I chatted with the group, including some local racers, Canadian pros, and a BMC rep. I held my own on the next segment: a short but steep, climb about 30 miles into the day—taking second overall in my age group—before regrouping to ride with John and my friend, Adam, the rest of the way.

One of my favourite roads was a long uphill to a lookout point, flanked by waterfalls, ferns, and log cabins. But I came close to bonking after I depleted my fruit snack supply. Thankfully, around mile 50(80km), I was saved by a rest station. There, I greedily scarfed down two cones of french fries and an alliterative assortment of pickles, Pringles, pretzels, and Sour Patch Kids. Throughout the race, I was impressed by the frequency of rest stops and friendly course marshals.

I could almost taste the free beer waiting for me back at the fairgrounds, but I still had to navigate the last timed segment: a singletrack descent rumoured to have seven stream crossings. “This is a gravel ride,” I thought to myself. “So it couldn’t be anything super technical, right?”

Wrong. During the mile-long section, I felt like I did more walking and waving at people to pass me than riding. The segment was a true off-road equaliser, and my lack of mountain bike prowess showed. I finished at 19:15, or almost twice as slow as the winner of the under-30 field. To make matters worse, I lost my favourite pair of sunglasses and inundated my “waterproof” socks. The BMC handled my haphazard manoeuvring well, though—the longer and slacker geometry helped keep me steady as the holes and rocks did their best to knock me off my line.

The climbs weren’t over, but the remainder of the course was straightforward, and I crossed the finish line in exactly five hours of riding. My final stats: 123.1km, 2 376m of elevation, and an alarming high “relative effort” score according to Strava. I picked up my wooden finisher’s medal, grabbed a beer, and walked to the portrait station to get a photo of me and my muddy bike.

The rest of the day was fun. People raved about how scenic the roads were (and how difficult the singletrack was) over organic veggie burgers and fresh pulled pork. I was surprised to learn that I’d captured some Strava KOMs during the day—that is, until a Canadian pro uploaded his ride that night.

I woke up early again on Sunday—despite throwing a jersey over my eyes to block out the morning sun—and packed up my tent before the last event of Grinduro: Komoot’s Hangover Ride. The route was climby but casual, punctuated by a fun road descent. Grinduro had come to a close, but John and I crossed the covered bridge down the road to grab cheesesteaks at Big Mike’s Steaks and Hoagies to conclude the weekend. They were okay.

I came away appreciating the passionate but relaxed atmosphere of Grinduro, perhaps best exemplified when I saw two riders—who finished the singletrack section much faster than me—trading puffs of a vape during a pit stop. I felt a little out of my element during conversations about bike parts or cycling trends, but I came away learning some new things, like why you might want a dropper post on a gravel bike and why you’re less likely to get a pinch flat on tubeless tires.

My biggest revelation of the weekend came when I noticed that although the roads were marked and monitored by Grinduro staff and volunteers, no part of the course was closed off to cars. I realised I could ride these roads whenever I wanted and probably find a similarly small amount of traffic. Of course, you can’t always get the festivities and camaraderie that Grinduro provides, but the gravel seemed inviting and democratic. There was something special about riding through picturesque roads without constantly worrying if my tires could handle a small pothole or being concerned about cars speeding past me. The gravel is there whenever you want, and Grinduro opened my eyes to that.