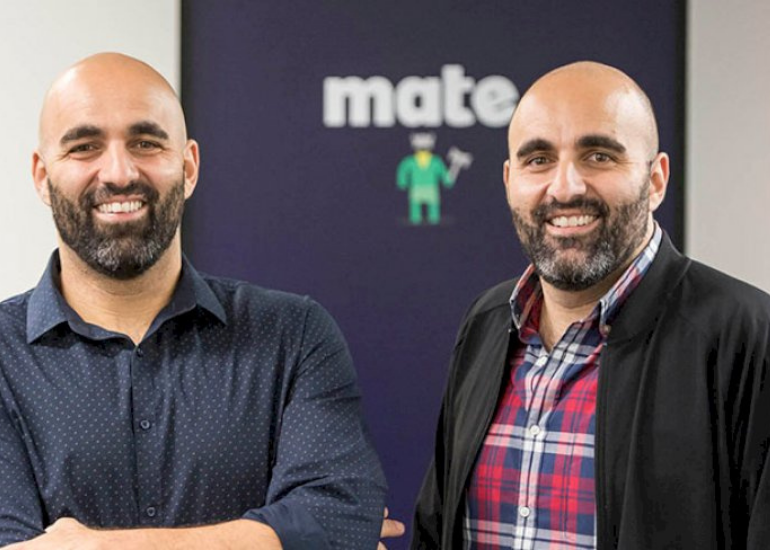 A brand you kinda want to be buds with, the aptly named telco MATE is only six years old and has already clocked up $100 million in revenue, employed 83 staff (including 19 cousins), and cemented hundreds of thousands of quantifiably happy customers.

Built off the promise to be a telco “Aussies can trust”, the fully owned Australian operation has a humble backstory.

In April 2016, identical twin brothers Mark and David Fazio came up with an idea at their aunty’s place in Western Sydney.

“We literally started the business in my aunty’s backyard, out in Smithfield. It started as a way to create some financial opportunity for our family and friends,” says Mark, co-CEO of MATE.

With the goal of starting a business of their own, and David already skilled in the corporate world of telecommunications, MATE felt like the right fit.

Telco disruption…with a chance of meatballs

In those early days, David’s laptop was perched on a filing cabinet as they worked in a room normally used for family parties. As customers signed up, Mark and David started hiring family and friends until they were 30 people strong.

“We took a step back and said, ‘This thing’s really taking off’. We’re still in my aunty’s backyard and we’ve got 30,000 or 40,000 customers,” he says. “We only predicted to have two or three people in the business… we got to the point that you had to have swipe cards that go into the side gate to get to the backyard. On the way through, you got my aunty’s meatballs and you went to your desk.”

Now, with considerably larger headquarters in Wetherill Park, Mark says they still have the same ethos about selling internet and mobile: this is what they do, not what they are.

“If you look back to when we started the business, a lot of people got locked into contracts that they didn’t understand, or they couldn’t change when a better price came out, and all those different things. And what happened was that people did not trust their telcos,” he tells Startup Daily.

At the same time, Mark says the big telcos like Telstra, Optus and Vodafone, outsourced all their customer service overseas.

“MATE was made for Aussies, about Aussies, to help Aussies be connected and be comfortable and supported with their telecommunications needs,” he adds.

In building MATE, Mark says the most powerful business lesson he’s learned is to not “cut corners where you can because it’ll become a bigger problem when you become successful in the future”.

“I wish we thought out or implemented in a bigger way with the hope that our business would be big in the future, which it is now,” he elaborates. “Sure, you only can do what you can do within your means. But it doesn’t cost money to think better, plan better, or work harder. And I think those things always get you a long way in the future.”

Likewise, he doesn’t believe in reinventing the wheel, saying if don’t know how to do something well, find someone – or something – that does. For them, HR and payroll was outside their scope of expertise, so they sought out a system that could do it for them.

“Like many others starting a business, we started without HR staff. So we needed to learn about payroll, compliance and staff and workforce management. MYOB provided a simple, cost-effective solution that scaled with the business,” says Mark.

The packaged payroll and HR software solution allows them to manage all the different things around cash flow, compliance, tax time, and in Mark’s words – all those different things that a small business needs to understand to grow.

“I’m a big thinker, I’m a sales and marketing guy. I’m not a guy that likes to get into the detail, particularly around finance. The software guides exactly what you need to do,” he says. “Let software and the people who are experts in their field do what they do. We focus on what we’re good at, which is growing our business.“

Growth during the pandemic

During the pandemic, MATE’s local edge gave them a leg-up over telcos relying on overseas support lines, with many call centres closing due to lockdowns across the globe.

“MATE kept its promise to stay onshore and be Aussie. We supported our customers in the best possible way. And you can see that from our product reviews,” Mark says.

It’s a philosophy that’s paying off. Mark says they boast Australia’s most satisfied NBN customers, with five stars in five categories for the Canstar Blue awards, beating all their competitors.

“The Canstar Blue award is huge because they’re out there asking random Aussies about their telco services. And they ask about price, reliability and service,” Mark says. “To beat our competitors is a big feat for this little company out here in Wetherill Park.”

Where to next for MATE

As for MATE’s next five years, unsurprisingly the brothers are planning for huge growth.

“We always say, you’ve got to be in it to win it,” Mark says. “My parents migrated to Australia from Italy with nothing apart from the shirts on their back to give us a better life. They gave their everything to achieve so that we could go through a school and create a business like this. Now it’s our time to give back – and this business is the vision they had for us.”

“And yes, my aunty still cooks every day for us in the office.”

Find out more about MATE here.

Are you early in your startup journey? Did you know MYOB is currently giving businesses less than two years old 50 per cent off their first 12 months with MYOB Business Lite ($12 a month)? Take advantage of this incredible offer today.

This article is brought to you by Startup Daily in partnership with MYOB.