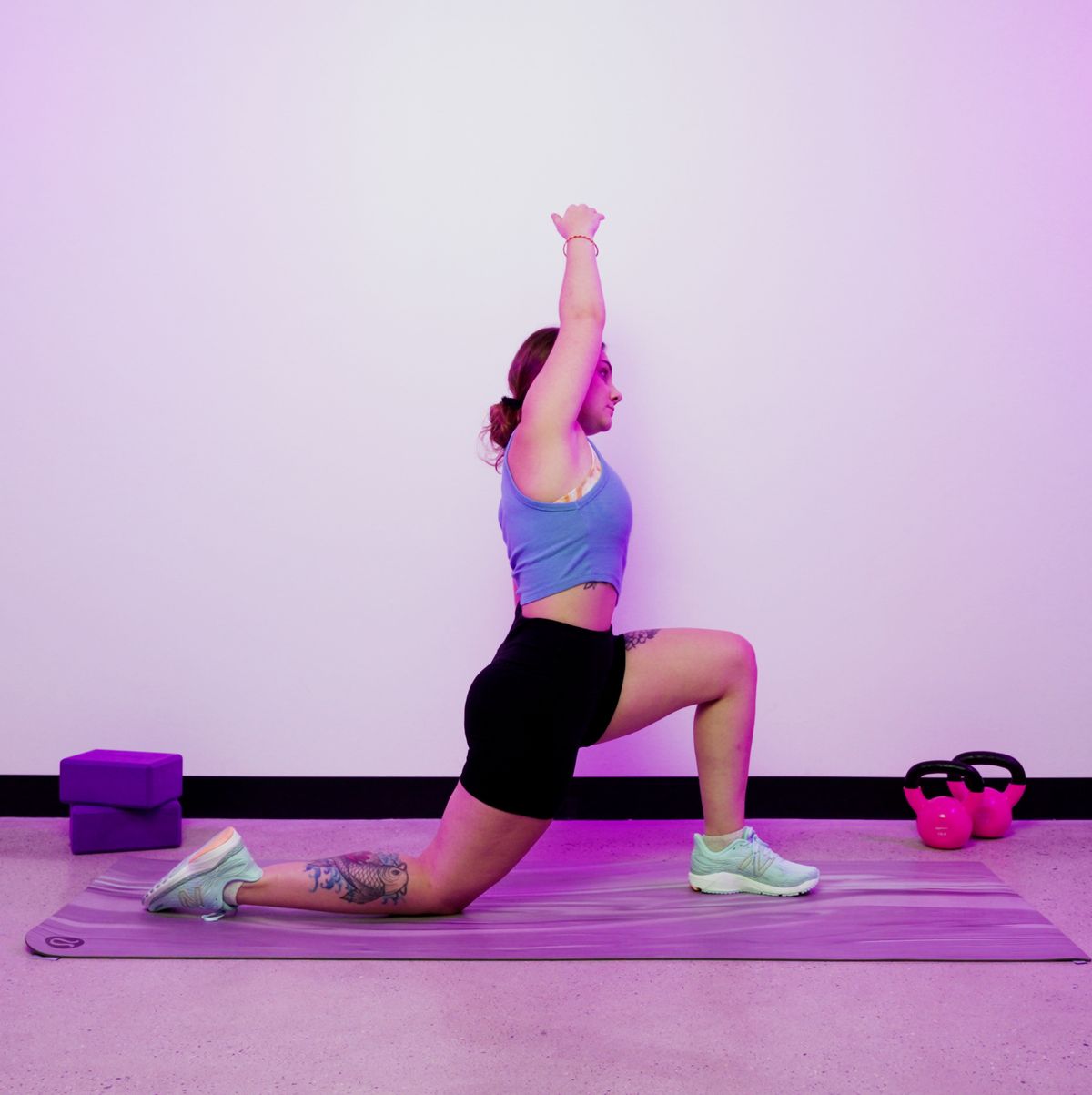 You may not think of your hips much when cycling. After all, it’s your legs that burn as you’re pedalling up a steep climb and your back that aches after being hunched over the handlebars. But you should be paying more attention to tight hips, because let’s face it, cyclists are naturally prone to them from that prolonged forward fold in the saddle.

The mobility of your hips is important in keeping everything else operating smoothly in your body and on the bike. But all too often cyclists, can ignore their mobility work, skipping stretching and avoiding full range of motion, which can lead to pesky problems down the road. That’s exactly why you need this guide on how to stretch your hip flexors and maintain their health through all those miles.

We spoke with two physical therapists who focus on treating cyclists to clue us in on why this muscle group gets so tight and how to stretch your hip flexors to increase your performance in the saddle.

What are the hip flexors and how are they used in cycling?

Your hip flexors are a group of five muscles along the front of your upper thigh, which includes the iliacus, and rectus femoris (that’s a muscle of your quads), and most importantly, your psoas.

The hip flexors are used in cycling to help you pull up on the pedal, Mark Shulman, D.P.T., C.S.C.S., owner of The Physical Therapy Effect, tells Bicycling. Shulman says that your hip flexors can, overtime, adapt to a shortened position, especially as we sit for prolonged periods of time, both in the saddle or at our desks. So trying to get them back to a neutral position may cause a sensation of tightness. The hip flexors may also be over active (or take on more work than they should) if a cyclist has weakness in their hamstrings and glutes, Shulman adds.

For starters, those weak glutes, which Shulman says can lead to a limitation in the hip flexor—or rather, its inability to complete a full range of motion. “Strong glutes are extremely important to cyclists, as this is the area that can help to control internal and external rotation of the knee during the pedal stroke,” he explains. The gluteus medius in particular (a smaller glute muscle toward the outside of your backside) is important to keep the knee driving forward in your pedal stroke—without strength in this muscle, your knee can cave inward, leading to pain, Shulman says.

What’s more, a weak core can also send your hips new challenges in the saddle. “The hip flexors are commonly compensating for a lack of core stability,” Tim Woo, P.T., D.P.T., founder of GluteDoping (a cyclist training program focused on glute strength) and owner of SoCalBikePT  tells Bicycling. Because the hip flexors attach to the spine, they’re in a prime spot for stabilisation through the trunk, even though that’s not their primary gig.

Why is it important to strengthen and stretch tight hip flexors?

If you’re chasing a smooth, powerful pedal stroke, and it’s not happening, it could be related to your hips. “A limited range of motion in the hip joint, caused by weak and tight hip flexors most often reduces the riders ability to pedal smoothly,” Woo says. “In the seated cycling posture, hip flexors are forced into their weakest and shortest length-tension relationship at the top of the pedal stroke.”

Mobile hip flexors, on the other hand, will allow “for more aggressive positioning, while maintaining smooth power generation, more comfort in the most common seated cycling positions for longer periods of time, and more smoothness in the pedal stroke as the leg goes over the top of the crank,” Woo explains.

Because a smooth pedal stroke is a fast pedal stroke, Woo says, weak or tight hip flexors can rob you of a faster pace and quicker miles. Shulman also says that hip flexors that lack range of motion make it difficult to fully extend your hips, which leads to inhibition or weakness in the glutes, especially the gluteus maximus—a major power provider that you also need strong for speed.

It’s important to maintain hip mobility in all directions, too. That includes hip flexion (knee driving to chest) and extension (leg driving down), and internal and external rotation to prevent deviations from a strong, smooth pedal stroke, Shulman says. Deviations in pedal strokes will often lead to pain, and most commonly, knee pain.

For example, “if the hip is unable to gain full range of motion into hip flexion on the up stroke, it will cause the hips to often push out into a position of external rotation, resulting in the knee flaring out to the side, beyond the centre of the foot,” Shulman explains. “A compensatory motion back to hip internal rotation typically follows on the down stroke, creating increased stress along the medial aspects [or inside] of the knee.”

Woo adds that maintaining healthy hip flexors is most important for comfort in the saddle. “When you’re comfortable you perform better,” he says. “This holds true at all levels of riding. Cycling is, on average, 5,000 pedal stroke revolutions per hour in a very small range of motion of the hip.” And to get through each of those revolutions, you want to be comfortable and ready to push those pedals.

Benefit your body off the bike

Shulman adds that mobility of the hip flexors is also important for cyclists off the bike. He says even when standing, tight hip flexors can mess with your posture, causing you to maintain a hunched position. This puts you at risk for increased pressure in the spine at the low back, and therefore ups your risk for low back aches.

How can you address tight hip flexors?

To get stronger hips flexors and a smoother pedal stroke, Woo trains his competitive riders out of the saddle and standing continuously on a climb for 10 minutes. “That takes a whole lot of core and hip flexor strength and coordination to keep the body working together smoothly,” he says.

When Woo begins training riders to stand on a climb for more than one minute, he says the first thing to usually give out is the lower back. “That’s a telltale sign of a lack of core and glute coordination.” If that happens to you, know it’s time to step up your glute and core work on your strength-training days, which just might also help those achy hip flexors.

Finally, having healthy hip flexors not only means mobility in the the actual hip flexors, but also the muscles surrounding the hip joint, like the hamstrings. “Flexibility of the hamstrings can be one of the most important muscle groups [for mobility of the hip flexors], as this allows for the hip and knee to flex during the up stroke and complete the full down stroke without pulling the cyclists side to side,” Shulman says. That means including hamstring exercises in your routine can also pay off in healthier hips.

To really get those hips loosened up and ready to handle fast, smooth miles, Woo and Shulman provide four hip flexors stretches and strengthening exercises to keep you moving efficiently.

4 Hip Flexor Exercises to Add to Your Routine

How to use this list: These exercises stretch your hip flexors, while strengthening the glutes and core muscles. Shulman and Woo suggest adding them to your cross-training days or pre- or post ride routine to loosen up before and after time in the saddle. Ideally, you’ll want to work on these exercises several times a week. Follow the reps and sets listed below for each exercise. You’ll need a resistance band and an exercise mat is optional.

Why it works: This exercise challenges the hip flexors to bring your knee to your chest, while maintaining core stability at the spine and pelvis. This also uses the glutes to support the bridge, which forces the hip flexor to stretch. This means you strengthen the glutes and hamstrings, while also stretching the hip flexors at the top of the move.

How to do it: Lie face up, knees bent, feet flat on floor. Place a resistance band around thighs, just above knees. Place hands down by sides. Engage the core and lift both hips up. Hold here. Slowly raise right leg, knee over hip, foot lifting off floor, as you engage glute of left leg to stabilise and drive left foot into the floor. Lower right foot back down. Repeat on left side. Continue alternating, keeping hips lifted the entire time. Do 2 sets of 10 reps on each leg. For a more advanced version, cross the arms across the chest while completing the exercise.

Why it works: Target the core muscles to stabilise the spine and pelvis, while allowing the hip flexor muscles to lengthen under tension. This improves coordination between the abdominal muscles and hip flexors, and helps return them to their ideal roles in cycling mechanics.

How to do it: Lie face up and lift both legs, knees bent 90 degrees and placed right over hips. Keep spine in a neutral position. Straighten arms above shoulders and pack shoulders toward the floor. This is your starting position. Still maintaining that neutral spine, extend right leg straight out, lowering it toward the floor, as you simultaneously extend left arm overhead, also lowering it toward the floor behind you. Keep left knee right over the hip and right hand right over shoulder. Pause, then bring the right leg and left arm back to the starting position. Repeat on the opposite side. Continue alternating for 2 minutes. Then rest for 1 minute. Repeat for a total of two sets.

Why it works: Lunges are great because they allow for both eccentric and concentric strengthening of the glute muscles, as well as gentle stretching of the hip flexors in the back leg.

How to do it: Stand with feet hip-width apart. Step left foot forward and lower into a lunge, both knees bending 90 degrees, with left knee right over left toes, and back right knee hovering just off the floor. Drive through both feet to stand up as you step right foot forward in front of left, and repeat the lunge. Continue alternating lunges as you walk forward. Do 2 sets of 16 to 20 reps on each leg.

Why it works: This intense stretch works to build tension tolerance and retrain core control. Think about anchoring the pelvis and core using the abdominals, and target tension at the hip flexors, without arching your back. This is a great move to perform after a long ride.

How to do it: Start kneeling. Step left foot forward, knee bent 90 degrees and foot pressed into floor. Squeeze right glute, engage core, and send hips forward slightly. Then, reach right arm up, and bend laterally to the left side. Hold for 90 seconds. Rest for 1 minute. Repeat for a total of 2 sets on each leg.