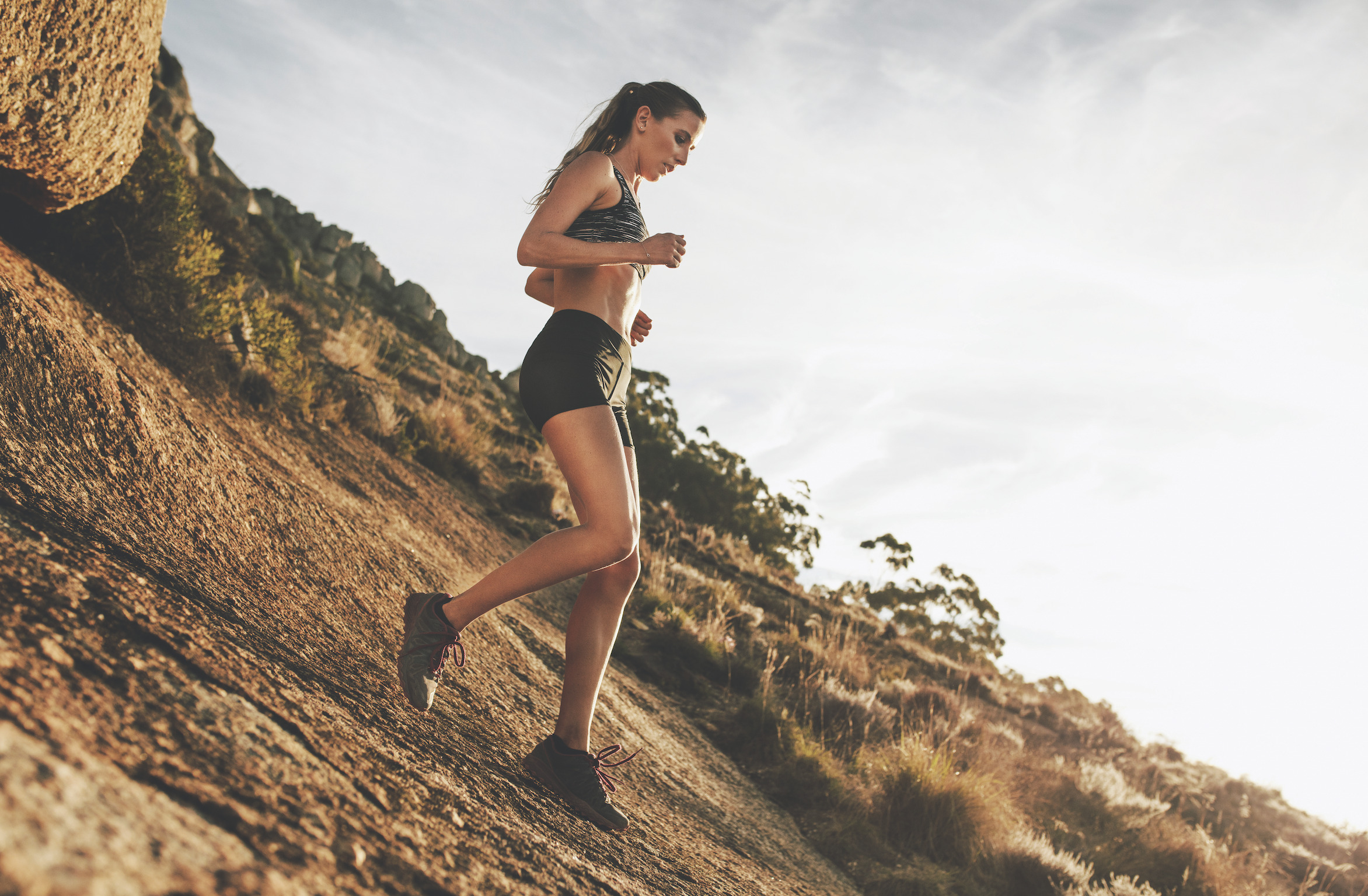 How should you tackle a technical trail run? Do you go easy on the uphills and fly downhill? Or do you work extra hard on the hills, and try to recover on the descents? What if it’s steep and technical – should you change how you run then?

A 2021 study aimed to answer these questions. Researchers from France kitted out 28 runners with three sensors – the trusty heart-rate monitor, a GPS watch (now becoming ubiquitous among runners), and a more novel form of tech that’s worn on the shoe and measures a type of power output and various stride parameters, such as ground contact time, leg stiffness and vertical oscillation. Using this combination, the researchers were able to get a much better handle on how performance and physiology is affected by how we adjust our effort and running technique on uphills, downhills and technical sections.

The test was done on an 8.5km trail loop that included two uphill and two downhill sections with varying technicality (very steep with roots and stones, or more gradual and smoother surface), and a road section in the middle which allowed comparisons between technical terrain and a smooth, tarred surface.

So what did the study show? Much of what the researchers found will not surprise those who hit the trails regularly and have learned or evolved a running method to handle the technical variation it throws at them. But we can take some lessons from these findings, and apply them to improving our own trail performance.

First, the best performances came from the most equal effort allocation. When researchers analysed ‘power output’, they found that overall performance correlated well with how runners ranked on the first climb and last downhill of the route; which means excessively fast starts or finishes didn’t pay off as much as consistent effort, both up and down.

This is a fundamental principle of pacing – you need to ‘spend’ your physiological reserves roughly equally across the whole race. I suspect many runners leave a bit out there, by going too hard uphill and too slowly downhill. Running downhill is technically challenging, so it’s often impossible to run it ‘flat out’, which means overall effort will often be slightly lower anyway. Still, the more even you can keep it, the better. Awareness plus experience makes perfect – so practise doing this!

Experiment to find your strengths and preferences, and then train according to that.

Second, ground contact time was shown to be much longer on the uphills; and the steeper the uphill, the longer it got. Ground contact time is important because every time we land, we store energy in our tendons, and the release of that energy like a pogo stick (when we push off) improves our running efficiency. But the longer the ground contact time, the less energy is saved; and after a certain point, we lose it entirely. At that point, continuing to move becomes all about how much force the muscles can produce – unaided.

What the study found is that on the steepest uphill sections, runners were spending an average of 1.3 seconds on the ground for each foostrike. That’s incredibly long, compared to the 0.25 seconds spent on the ground when running on the smooth tar section.

This explains why many very fast road runners don’t make a good transition to trail, and vice versa – when you spend that much time on the ground, you’re no longer benefiting from elastic energy; instead, you’re relying on strength. If you’ve ever tackled a super steep (35% or more) climb, you’ll know that it feels just like doing 500 lunges or squats in the gym. It’s a test of strength, not ‘bounce’, and the study confirmed this.

What you can take from this is that one of two strategies may help your uphill ability. One is to keep your ground contact time shorter, by taking shorter, faster steps. Basically, think ‘high cadence, light on feet, short steps’. The other strategy is the opposite: accept that your ground contact time will be longer – but take longer steps. Think ‘step longer, reach forward, high force’. The first strategy will load your calf muscles more, while the second will be more demanding on the glutes and hamstrings. Experiment to find your strengths and preferences, and then train according to that for improved performance.

What about downhills? As you might expect, ground contact time was slightly shorter when running downhill, but not by much (0.25s when running on tar, compared to 0.22s on the steep and technical descent, and 0.21 on the smooth and more gradual descent). So the changes aren’t nearly as large as they are for uphills.

Where it gets interesting is that flight time – which is the time we spend in the air – and stride length (the ground we cover between footfalls) changed differently depending on the technical nature of the terrain. Unsurprisingly, on uphills, both flight time and stride length are way lower than when we run on smooth tar. But on downhills, the change depends on the steepness and the surface.

When steepness is gradual (in this study, that meant -13.3%, which is still very steep to run down!), flight time goes up by 40%, and stride length is 30% longer than on the flat tarred roads. More time in the air, less time on the ground, covering more distance per stride – all this adds up to much faster speeds.

But when the downhill section is steep and tricky underfoot, what good, experienced trail runners do is cut their stride length and flight time way back (45% and 50% respectively) compared to when they tackle gradual downhills. They end up running in a way that’s very similar to when they’re on flat, tarred roads. But given the terrain, this resembles a ‘pitter-patter’ style rather than normal running. This too can be learned, if you focus on training yourself to take small steps and be light on your feet when it gets really steep and really technical.

In reality, with time and repetition you’d probably do much of this naturally. Evolution filters out the ineffective and inefficient ways to run, leaving behind what the study found in these good trail runners. However, being aware and then practising these changes may improve your performance in small increments; and repeated enough, they will help you to unlock a great deal of trail-running potential.

Run up and down a single stretch of hill, working uphill and downhill at a controlled-discomfort level (you should be able to speak in bursts of three to
four words). Complete 20-30 minutes of effort broken into sets with a short recovery.

Instead of running your tempo runs at a consistent pace, add surges of effort – e.g. a 25-minute run at 10K race effort, but with 15-30 seconds hard every five minutes.

Find a hilly loop. Run the uphill with a pronounced bounding movement – imagine springing up the hill for about 15-30 seconds, fully straightening your rear leg; jog a flat section of recovery at the top; run back downhill with fast but relaxed strides, focusing on fast cadence. Then jog back to the uphill again.

Fartlek training, in which you incorporate a range of efforts of between 30 seconds and five minutes into a continuous run, is suited to trails, as you can use the terrain to guide you. – Tom Craggs, endurance coach.

Prof. Ross Tucker is one of the world’s top sports scientists, and the co-host of the Real Science of Sport podcast.