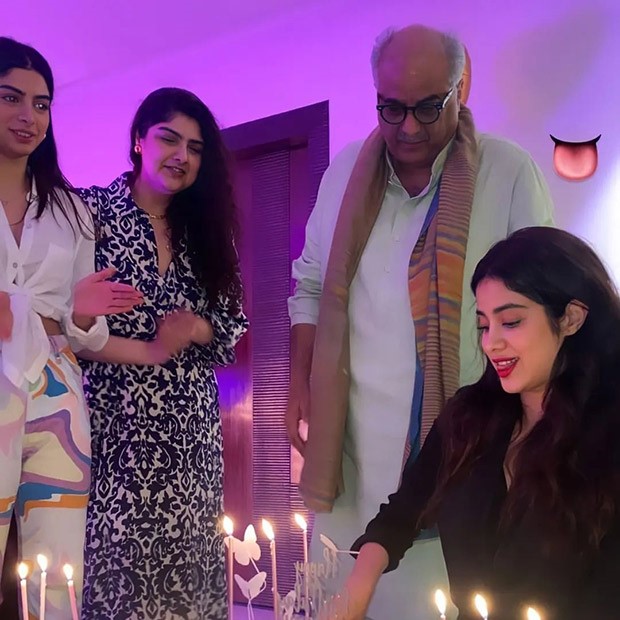 Soon after visiting Tirupati, seeking blessings of Lord Balaji, actress Janhvi Kapoor flew back to Mumbai to end her birthday celebrations with her sisters Anshula Kapoor, Khushi Kapoor and their father Boney Kapoor.

Anshula hosted a neon-themed birthday party for Jahnvi and shared a cute video, Monday, on her Instagram handle where she happily posed with Janhvi for a picture and added Sage The Gemini’s song ‘Tick Tick Boom’ to the video.

The two sisters can be seen posed against the backdrop that read, “All you need is love.” The backdrop décor also included light and dark pink colored balloons and another huge sign of alphabet “J”.

Anshula captioned the video as – “Mine! ” to which Janhvi wrote “I love you ” in the comments along with an evil-eye emoji in another comment of the post. Their uncle Sanjay Kapoor also dropped a heart emoji in the comments section. Sharing a story post of sister Khushi Kapoor in funny avatar, Janhvi wrote, “Birthday welcome.”

Previously on Sunday, Anshula posted an adorable picture with Janhvi to wish her on birthday with a sweet caption that read, “A year older! A year bolder! Here’s to another year of laughing together, annoying each other, salivating over food videos together, crying together, messing up together, watching emo films together and loving each other! You’re my Bae, I love youuuu (more than you love tiramisu )”

In another series of photos shared by a fan account, Janhvi can be seen wearing a black dress as she cuts her birthday cake. Father Boney Kapoor, Khushi and Anshula are also captured in the photos.

On the work front, Janhvi Kapoor is currently working on her next film, Mr and Mrs Mahi alongside actor Rajkummar Rao. Backed by Karan Johar’s Dharma Productions, the film also features cricketer Dinesh Karthik and is directed by Sharan Sharma. She will also be seen in Mili, and Good Luck Jerry.