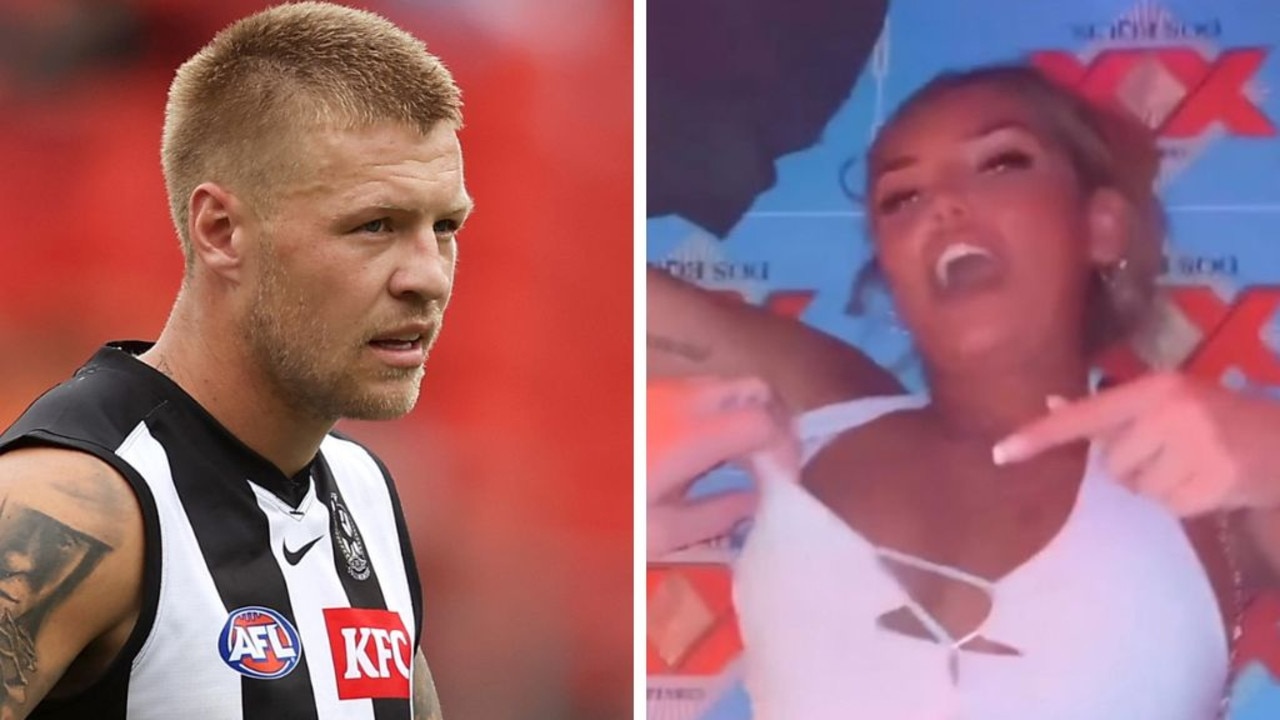 AFL star Jordan De Goey is taking time away from Collingwood after his Bali scandal consumed the entire football landscape.

Collingwood’s Jordan De Goey won’t be lining up alongside his teammates this weekend when the Magpies return to action.

De Goey has been granted personal leave from the club following his Bali trip scandal during the club’s bye round.

The 26-year-old was handed a suspended fine of $25,000 on Tuesday — a punishment that was widely slammed as woefully inadequate — after footage emerged of him appearing to try and partially expose a woman’s breast while partying overseas.

He hasn’t been seen at the club since returning from Indonesia on Sunday and on Wednesday night Collingwood confirmed he would not face the GWS Giants this weekend.

“The Collingwood Football Club advises player Jordan De Goey has been granted personal leave by the club and will not take part in the Round 15 match against the GWS Giants,” the statement read.

“Jordan has been absent from training this week and the club will continue to support him on his return to the football program.”

Fox Sports’ Drew Jones the club had been hopeful De Goey would have returned on Wednesday and record a video message.

“My understanding is the club were keen for him to get back to Collingwood HQ and even potentially record a video to be distributed to fans and media this afternoon,” Jones said on Fox Sports News.

Collingwood confirmed on Tuesday it has parked contract talks with the talented player until the end of the season, after it was reported the Pies pulled a $3.2m offer because of the scandal.

De Goey won’t have to pay a cent of his suspended $25,000 fine if he stays out of trouble for the remainder of the season, leading pundits to accuse Collingwood of not backing up its strong words, after the club said it “strongly condemns” the star’s “disrespectful conduct”.

De Goey had earlier slammed the media for the storm that erupted over his trip, taking aim at “the relentless pursuit and persecution of athletes” to “create an uneducated, bias and ill-informed narrative that has gone too far”.

The woman alongside De Goey in the video, Remy Jackson, also spoke out in defence of him on social media on the weekend.

“Hey everyone, I can’t believe the backlash towards Jordy and myself over here in Bali … nothing to see here,” Jackson posted on her Instagram story.

However, the footy star showed more remorse in an apology on Tuesday.

“I unreservedly apologise to the Collingwood Football Club, its members, supporters and the wider community for my conduct in Bali and I accept full responsibility for my actions,” De Goey said.

“The actions shown in the video footage are disrespectful and I accept that I have betrayed the trust the club showed in me by allowing me to take my mid-season break overseas.

“I fully accept that as an AFL player, I have a unique leadership role in the community and with that role comes responsibility.

“My actions have fallen short of the standards expected of me as a person, as an AFL footballer and as a representative of the Collingwood Football Club.

“I had worked hard this year to establish trust and confidence in me to make better decisions and through no one’s fault but my own, I have undone that trust.”