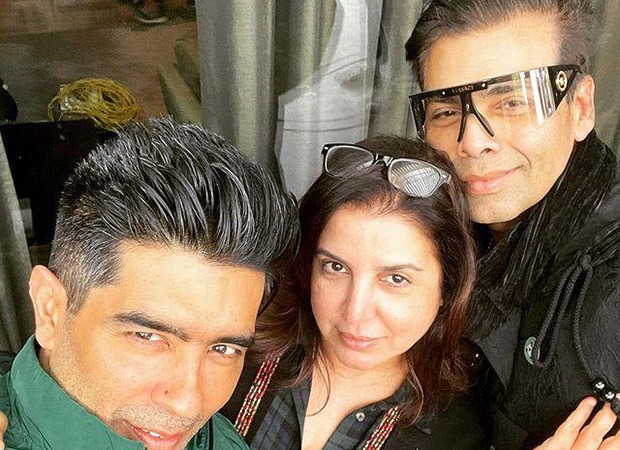 Sarcasm, eye rolls and some punny banter – that’s how we can describe the latest video of Farah Khan. Who knew that the choreographer-filmmaker has a penchant for Instagram reels. Joining her B-town gang, a recent video shared by Farah seems to have caught quite the attention and it features Karan Johar along with fashion designer Manish Malhotra, with Farah as the voiceover artist.

Karan Johar and Farah Khan ‘roast’ each other in this video; Manish Malhotra joins in

Holding the camera, a fun banter kicked off between the trio over fashion with some fun jibes directed at each other’s eccentricities. The first one was Karan Johar. Farah Khan started the video by showcasing Karan Johar in his uber cool and expensive branded outfit wherein she is seen asking him what he is wearing. To the same, KJo is seen replying, “I am in my oversized Balenciaga, let me tell you something about this brand…” But before he can complete the sentence, Farah interrupts saying she doesn’t want to hear him and pans the camera to Manish Malhotra who adds, “Karan wears the most expensive clothes and keep talking about his looks but I look better.” Farah ends up at chuckling at this comment as she herself goes on to agree, “You do look better because you are very handsome,”, she quickly adds, “you are handsome also Karan.”

Karan Johar responds to this subtle jibe saying, “Manish is handsome I’ve to admit it but look at who we are looking at. The glamorous icon Farah Khan in the house.” And with a flat expression, he concludes, “She’s looking slimmer, and the earth is flat.” On hearing this, while Manish goes on to ‘woo’ beside Karan, Farah fails to control her laughter and shuts the video saying, “Okay, Bye.” Needless to say, it is a fun banter to witness!

Readers would be aware that Karan Johar often becomes news owing to his sartorial choices that some love, while others hate but none of them ignore. From his love for bling to his iconic glasses, some of them have gone to become style statements. The video also had some interesting comments from his fans and followers. Shibani Dandekar commented on it saying, “I need Karan’s tracksuit!! 🔥”, to the same, Farah gave a witty response adding, “@shibanidandekarakhtar so does the navy.. to make sails.”

Also Read: Farah Khan wishes Karan Johar on his 50th birthday by showing his wardrobe with luxury clothes and shoes – “Do you want to step out of closet?”