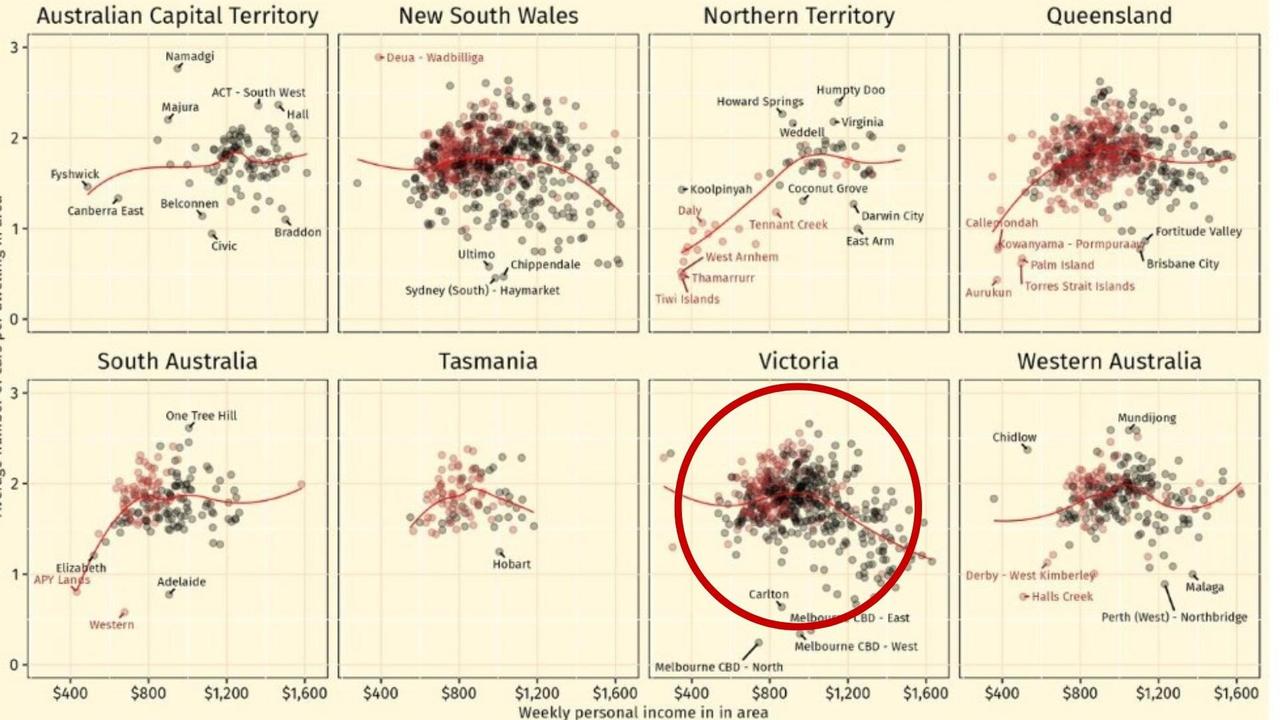 I love this quote from the iconic Australian movie the Castle.

“Steve could you move the Camira? I need to get the Torana out so I can get to the Commodore.”

The Castle is a movie is from the 1990s about a family who are rich, just in ways other than money. The film is out of date in many ways (all those cars were Australian-made, for one!) but the joke in the quote above still rings true: Less wealthy households sometimes have a crazy number of cars.

FYI: If your car is parked on the front lawn because the driveway is full, then there’s a decent chance you may not live in the most fashionable part of town.

For each state, peak car ownership is around the middle of the income curve and above that, higher income correlates with fewer cars per household.

Each dot on the charts above represents an area in Australia, about the size of a postcode. The red line shows an average of the dots, revealing that above a certain amount of income per person the number of cars at each dwelling tends to fall. Wealthy people don’t tend to live with lots of other adults.

Pay attention though: the above chart is for personal income. If you measure household income, the relationship is different: Households with more income have more cars, because people who work and contribute to household income generally need a car to commute in.

One common type of household that has a lot of cars is the exact one you see when you watch The Castle – one with adult kids living at home. They are also the ones that spend the most on petrol.

The maps below show the distribution of cars in each of our big cities. As you can see, there are lots of areas with less than one car per dwelling on average in the middle of town. Further from the city centre, you find more garages, bigger homes and more cars. This analysis is done on very fine-grain areas and there may be different areas labelled, with a different number of cars per dwelling, within a suburb.

The fact households in poor areas own more cars than households in rich areas is fascinating because as a general rule, rich people can afford more stuff than poor people.

What the maps show is rich people prefer well-located real estate to owning lots of cars.

But is that right way to live? Maybe it’s worth owning a few more cars and living further from the hustle and bustle? After all: How’s the serenity?