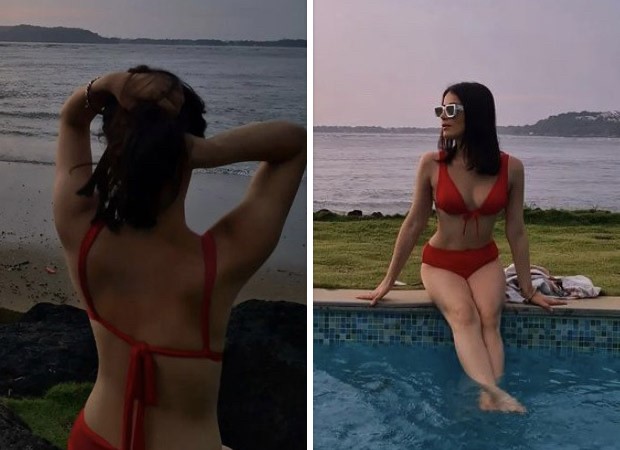 Radhika Madan’s acting has helped her win over millions of followers. The actress has a sizable fan base on social media. Fans can’t get enough of the actress since she frequently dazzles them with beautiful photos and videos. Radhika seldom gets spare time because she is working on so many interesting movies, yet she still finds time to relax from her busy schedule. The evidence for this is Radhika Madan’s quick getaway to Goa.

Radhika Madan surprised the internet by sharing her swimwear look with her fans. Radhika Madan joined her to the list of Bollywood celebs now sporting bikinis, and we adore her style.

The Angrezi Medium actress recently uploaded a photo of herself next to the pool while posing in a red bikini with a high waist. Her red bikini has a front knot design and a plunging neckline. Her thick-framed white sunglasses are also a great summer addition. The diva looked completely mesmerizing in subtle makeup as she stepped out of the pool.  Radhika captioned her post as, “just pooling around.”

On the work front Radhika will be next seen in Dinesh Vijan’s Happy Teacher’s Day alongside Nimrat Kaur. Apart from this movie, Radhika Madan has many interesting movies in her pipeline. She will feature next in Kuttey alongside Arjun Kapoor, Sudhanshu Saria’s Sanaa with Pooja Bhatt, and the remake of the yet-to-be-titled film, Soorarai Pottru with Akshay Kumar.