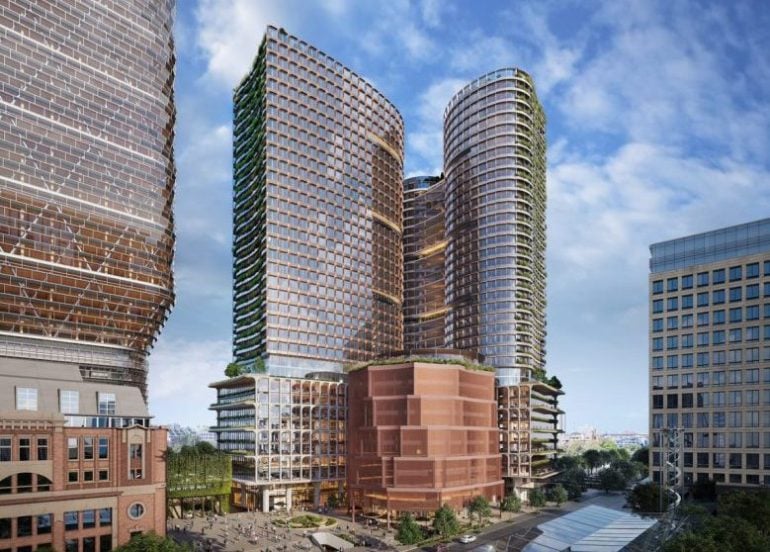 The developers behind the twin towers office complex at Sydney’s Tech Central innovation hub have lodged their final Development Application (DA) for the $3 billion redevelopment of the site.

Central Place Sydney, a joint project between Dexus and Frasers Property Group, is adjacent to Central Station at the southern end of Henry Deane Plaza, sits beside Atlassian’s 40-story eco tower, due for completion by 2026.

It spans two existing office blocks on Lee Street currently occupied by several state and federal government departments, including Transport for NSW, Corrective Services and the Dept of Home Affairs.

The two towers, at 37 and 35 storeys, are designed by local architects Fender Katsalidis and US firm Skidmore, Owings & Merrill (SOM). They sit alongside two new smaller buildings, known as The Connector and Pavilion, which have been added to the final design.

The Connector, by Melbourne architects Edition Office in a collaboration with Indigenous design and strategy studio Balarinji, fronts Lee Street and has 10,000 square metres of floor space. It’s designed as an “architectural marker, acknowledging the site’s history as a cultural meeting place”.

Balarinji MD and co-founder Ros Moriarty said her design studio’s approach is a response to Place and Country in co-design with local Aboriginal knowledge holders, storytellers, and creative practitioners.

“The foundational Gadigal narrative of Sydney is thriving, and it is vital for it to be integrated in such a significant precinct,” she said.

The Connector will offer spaces for smaller companies and startups, as well as connections to the other two buildings providing potential workplaces as large as 5,000 square metres across the same level.

The two-storey Pavilion was designed by Fender Katsalidis and SOM. It will have space for programmed events and activation and has been designed as a flexible structure that can be disassembled and relocated once plans for future over-station development are finalised.

The total price of the project, first revealed in 2020, has risen from $2.5 billion to $3 billion. It will provide up to 133,000 square metres of floorspace towards the NSW Government’s goal of 250,000 sqm at Tech Central. Central Place will also feature retail, dining, entertainment, community, and public space.

Project Director Kimberley Jackson said the new design elements in the development complete the vision for Central Place Sydney as the “beating heart” of Tech Central.

“These finalised designs have been specifically created to help tech and innovation businesses take on tomorrow – creating a space that combines the lifestyle amenities, connectivity and opportunities to collaborate that are critical to keeping teams engaged and productive in the new hybrid way of working,” she said

“Even the name Central Place Sydney pays homage to its centrality within Tech Central, connectivity to the Sydney CBD and beyond, as well as its continued role as a place where both people and ideas come together.”

While City of Sydney ponder planning consent for the projuect, there is a parallel process underway to progress the project through Stage 3 of the NSW Government’s unsolicited proposals process.