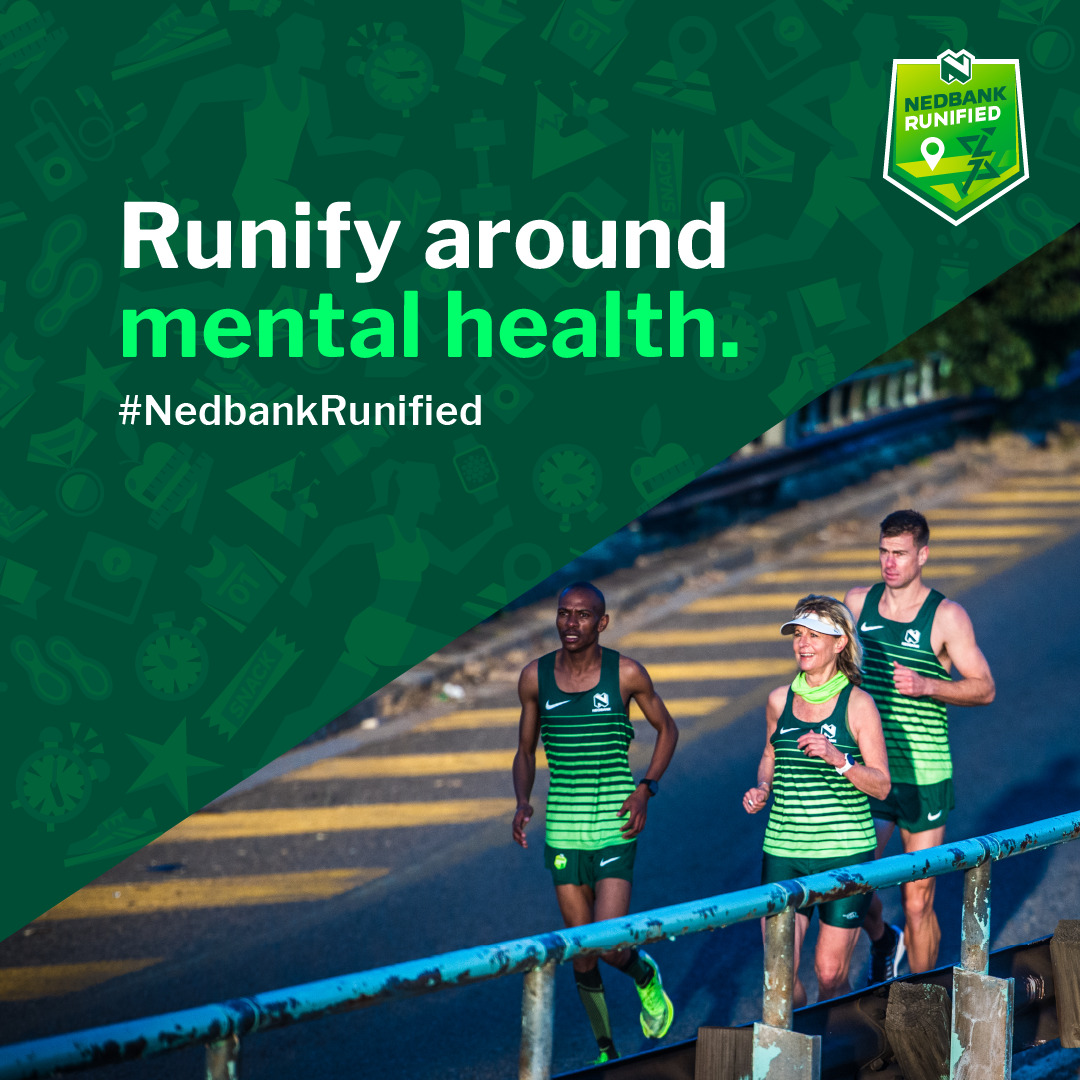 Now in its third instalment, Nedbank Runified will combine virtual and physical running challenges to rally around a real issue in our country – mental health. This running challenge, in partnership with the South African Depression and Anxiety Group (SADAG), aims to demonstrate that running (particularly in groups) can reduce stress, depression and anxiety.

Originally launched as a proactive response to fight the societal effects of Covid-19, Nedbank Runified was a movement to instil a sense of ‘togetherness’ when South Africans were forced to be apart, with running as the catalyst. With over nine million kilometres run by more than 225 000 participants, the Nedbank Runified virtual series became a source of mental relief for many South Africans during the national lockdowns.

This running challeng aims to demonstrate that running (particularly in groups) can reduce stress, depression and anxiety.

“As the nation moves on post the national lockdowns, there is a natural evolution and a new meaning to Nedbank Runified, one which serves to bring South Africans together to address mental health, a serious healthcare issue that is impacting society,” says Nthabiseng Matshekga, Executive Head for Group Marketing at Nedbank.

“The mental health crisis existed long before the Covid-19 pandemic but intensified during lockdown. Currently, mental health in South Africa is one of the worst in the world, with one in three South Africans battling with their mental health,” says Cassey Chambers, Operations Director at SADAG.”It is scientifically proven that exercise, particularly running, improves mental health and reduces depression, stress and anxiety. As we approach Mental Health Month in October, we are immensely excited to partner with Nedbank through Nedbank Runified to raise awareness and drive education on this issue.”

Nedbank Runified group runs – led by athletes, mental health advocates and running enthusiasts like Zinhle Masango, Amy Hopkins, Nicola Schreuder, Nombulelo Mgabadeli and Tumi Sole – will take place in Cape Town, Johannesburg and Durban with at least one run every day between August and September 2022. Anyone can participate, and these group runs will be followed by a national mass participation Strava challenge during Mental Health Month in October.

‘Nedbank has been involved in running for decades, and we are proud to use the Nedbank Running Club as a vehicle, coupled with relevant partnerships, to create a lasting impact in the communities we serve. SADAG’s expertise is vested in helping people throughout South Africa with their mental health and is an invaluable part of our community. We are proud to partner with them to help drive the movement for better mental health’, says Matshekga.

To find out how you can join Nedbank Runified in your city, join the Nedbank Running Club on Strava or search #NedbankRunified or #MoreThanAClub on social media.

The Nedbank Running Club is more than a club and welcomes runners of all fitness levels to unify through running. It is time to Runify around mental health, and take the first step towards a happier, healthier South Africa.

If you or your loved ones are battling with mental health challenges, there is hope. Visit sadag.org or call 0800 567 567 in the event of an emergency.