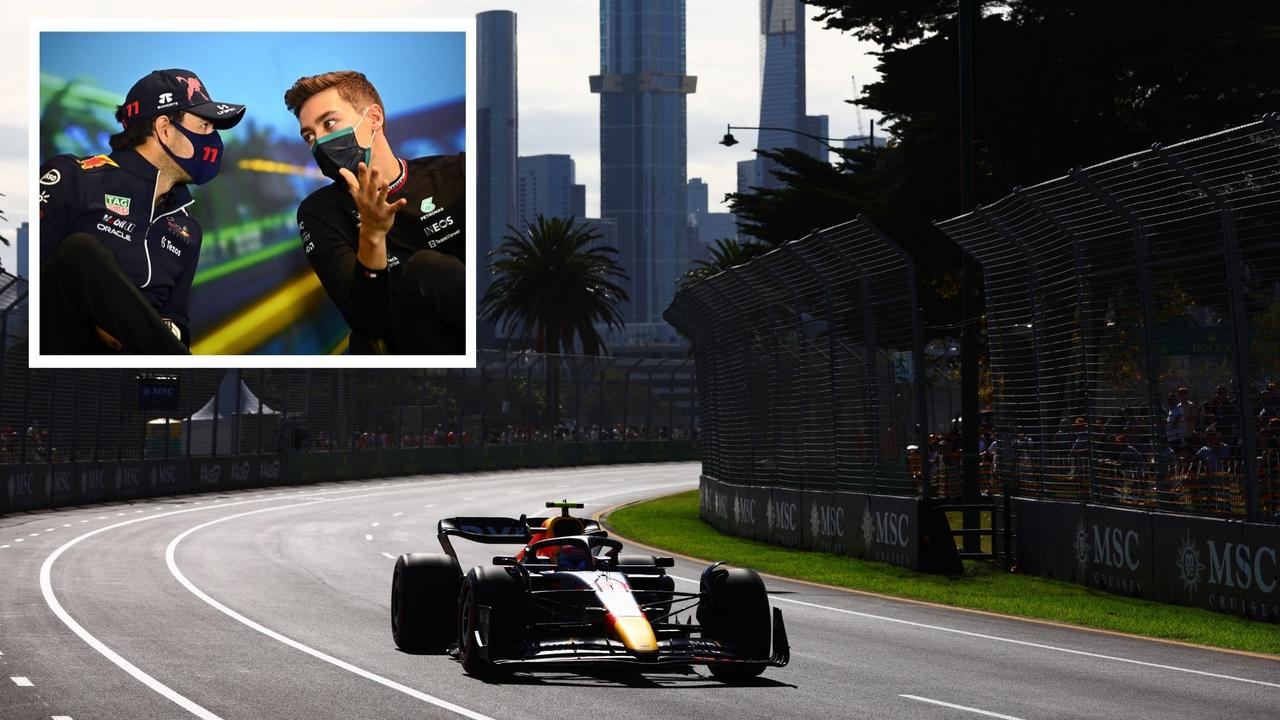 A 29,000 round trip to Australia in the middle of the season has been slammed by F1 drivers amid calls to return to a historical precedent.

F1 drivers have hit out at Australia’s position on the 2022 F1 calendar.

The old argument why people don’t like to travel to Australia because of its distance from the rest of the world has re-emerged as Red Bull’s Sergio Perez and Mercedes’ George Russell suggested the Australian Grand Prix can’t be in the middle of the schedule.

Although it has been two weeks since the Saudi Arabian Grand Prix, the F1 roadshow needed to move nearly 13,000km between Jeddah and Melbourne, and over 16,000km to the next race at Imola in Italy.

Perez said the distance in the middle of the calendar was just too brutal.

“As the season is getting longer and longer, we need to get a better balance.” Perez said

“It works well at the moment because we are doing the winter testing in Bahrain, it makes sense to stay there.

“But it really has to be back-to-back with one of those races because just coming to Australia for a single race is quite painful for everyone.

“We all want to come here, but there is ways we can improve and in fairness to F1 Australia hasn’t been on the calendar for the last (two) years.

“I’m sure that going forward they can have a look at it.”

Historically, it’s a decent argument as generally, Australia has held the first or last race of the season since 1995.

Between 1996 and 2019, Australia was the season opening race for each championship except 2006 due to the Melbourne Commonwealth Games and 2010, where it was the second race on the calendar.

In 2020, the F1 season was cancelled while in Melbourne due to the Covid-19 pandemic and this is the first time the race has been back after it had to be cancelled in 2021.

Before the Grand Prix moved from Adelaide to Melbourne, it was the final race on the calendar between 1985 and 1995.

After 2001, it was also followed by the Malaysian Grand Prix, or in recent years the Bahrain or Chinese Grand Prix. Between 1995 and 2000, it was partnered with the Brazilian Grand Prix. When it was still held in Adelaide, the Grand Prix was held after South Africa in 1985, Mexico in 1986 and Japan for the remainder of the time it was held in South Australia.

Ferrari star Carlos Sainz also said the distance was tough in the middle of the season.

“It gives you that extra vibe to come all the way here, it’s such a long trip.”

Similarly, Russell said the time zone difference and the cumulative distance the sport covers in a year made having the Aussie Grand Prix mid-year “too tough” for Europe-based teams.

He added that it should also be a double-header with an Asian or Middle Eastern race.

“I think Melbourne here as the season-opener was really cool because everybody came up here early and there was a lot of excitement and anticipation,” Russell said.

“But I think having Melbourne in between races, especially as a stand-alone is too tough for the teams and everybody.

“People came out on Saturdays and Sundays to get acclimatised to the conditions, to the time zone change and it is just too much.

“I think it needs to be thought about more. There is no reason we couldn’t do a back-to-back with one of the Middle Eastern races. But it feels like another double-header for all the teams with the amount of time they spend in this part of the world.”

Russell clarified his statement saying that the Australian GP could be held anywhere on the calendar but that it needed to be organised alongside other races.

“If it is geographically correct …. we are happy for it to be at any point of the season. We obviously race very far east with Japan and Singapore, China obviously, not this year, but it is on the calendar from next year onwards,” Russell said.

“I just think there is a better compromise to be had. I know there is a huge amount of limitations involved.

Originally published as ‘Painful for everyone’: Drivers unhappy with Aussie Grand Prix move