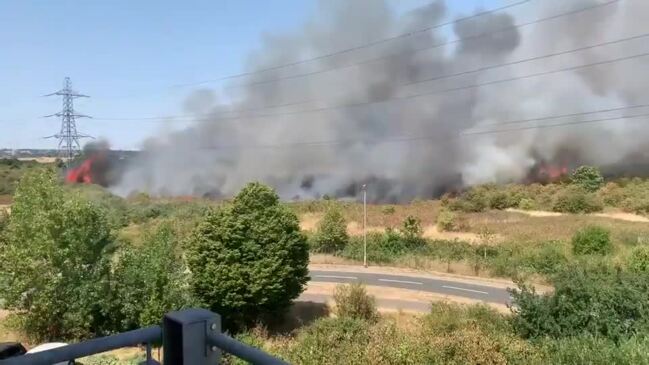 Smoke filled the sky as a grass fire burned in Dartford, England, southeast of London, on Tuesday, July 19. The Kent Fire and Rescue Service reported a grass fire started in Dartford on Tuesday. The fire department cautioned drivers in the nearby area as “smoke may impact visibility.” There were record-high temperatures in the United Kingdom on Tuesday, with the Met Office reporting temperatures over 40 degrees Celsius (104 degrees Fahrenheit). The heat could have contributed to fires developing and spreading “rapidly and with greater severity,” according to the Kent Fire and Rescue Service. This video posted by Steve Page shows smoke rising from the fire in Dartford on Tuesday. Credit: Steve Page via Storyful