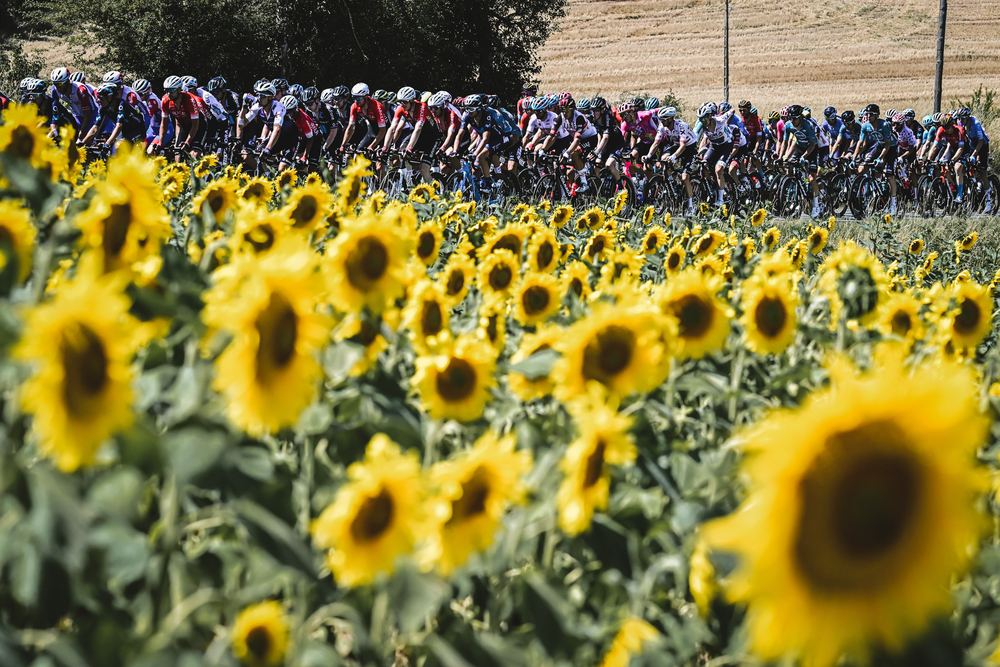 Stage 16 brings the riders out of the Rest Day and into the Pyrenees for the first of three days in the mountains that form the border between France and Spain.

Beginning in Carcassonne, which hosted the finish of Stage 15, the race heads south toward the first two of the day’s four categorised climbs: the Category 4 Côte de Saint-Hilaire (1.5km @ 6.6%) and the Category 3 Col de l’Espinas 5.3km @ 5%). Minor climbs compared to what’s coming later, these ascents should be covered in the race’s first hour, which will again be intense as riders fight to get in the day’s breakaway.

IN CASE YOU MISSED IT – What Actually Happened To Tadej On Stage 11?

Once over these early hills, things should settle down as the race heads toward the Intermediate Sprint in Lavelanet (KM 67.8) and the national regional park that’s home to the day’s two Category 1 climbs: the Port de Lers and the Mur de Péguère.

The Port de Lers (11.4km @ 7%) begins with about 65km left to race. Long and steady, its steepest pitch comes at the bottom, but the road never really lets-up until the summit. A 14km descent takes the riders down to the base of the day’s final and most challenging ascent, the Mur de Péguère (9.3km @ 7.9%).

Beginning with about 37.5km left to race, the Mur de Péguère is shorter, but much steeper than the Port de Lers–and even steeper than its average gradient suggests. The first few kilometres of the climb are actually quite gentle, but the road ramps up after about 4km of climbing and then a lot more 2km after that.

How steep does it get? Well, the final 3.5km of the climb all have average grades over 11%, with pitches well above that in a few spots. This is the perfect place for Slovenia’s Tadej Pogačar (UAE Team Emirates) to try and test Denmark’s Jonas Vingegaard (Jumbo-Visma), the current leader of the Tour (if he hasn’t done so already).

The riders summit the Mur de Péguère 27km from the finish line in Foix, with a long, sometimes technical descent down to the line. Fans might remember this descent from the 2012 Tour de France, when someone threw a box of tacks onto the course, causing dozens of flat tires as the riders raced down to the finish.

As far as the weather is concerned, there’s good news and bad news: temperatures will be a bit more manageable with highs around 90 degrees. But isolated thunderstorms in the afternoon could make the descent into Foix even more treacherous than it already is.

We expect two races to take place on Stage 16: the race for the stage win and the race for the yellow jersey. With Jumbo-Visma depleted after losing Primož Roglič and Steven Kruijswijk on Stage 15, they might be content to let a breakaway build a large lead and stay away until the finish line. If that’s the case, look for riders like the United States’ Neilson Powless (EF Education-EasyPost), the Netherlands’ Bauke Mollema (Trek-Segafredo), Canada’s Michael Woods (Israel-PremierTech), and Spain’s Luis-Leon Sanchez (Bahrain-Victorious)–who won the stage back in 2012–to give it a go.

As far as the yellow jersey is concerned, this is the first of Pogačar’s three chances to claw back some time on Vingegaard before the Tour’s final time trial on Saturday. Vingegaard’s proven tough to crack since taking the yellow jersey on Stage 11, but with fewer teammates to protect him, he’ll be more isolated than he was before the Rest Day.

The final two climbs should be exciting–especially if Pogačar starts attacking early and often. We’ll tune-in around 15h30 as the riders hit the base of the Category 1 Port de Lers, then watch the final 90 minutes of the stage. If you’re pinched for time, the leaders should start the final climb, the Category 1 Mur de Péguère, at about 16h15, which leaves you more than enough to see most of the action unfold.