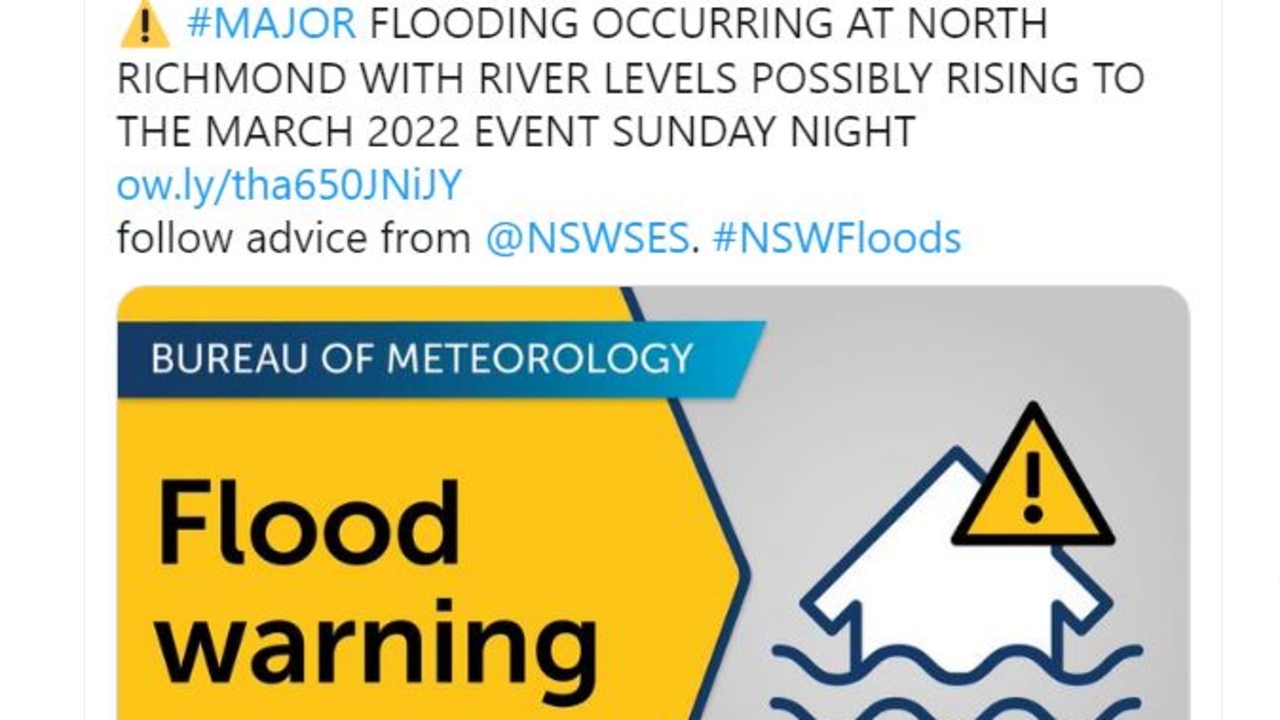 Thousands of residents are on notice after the Bureau of Meteorology issued a chilling major flood warning this afternoon.

Residents of several suburbs in and around Sydney were told to leave their homes overnight as a monster storm bears down on the city, with predictions as much as half a metre of rain could fall in total.

Forecasters have said the worst of the weather is yet to come with an East Coast Low set to near the coast on Sunday and drag into Monday.

The outlook is now for the East Coast Low to have multiple centres to it which could turbocharge its impact.

“There’s torrential rain, the risk of major flooding, landslides as well as damaging winds which could bring down trees and lead to property damage and power outrages”.

According to the Bureau of Meteorology, North Richmond has gone up a staggering 10m from midnight to Sunday afternoon.

River levels in the Nepean River at Menangle have exceeded the flood height reached in the March 2022 flood event – 15.92 metres – and peaked slightly below the April 2022 flood height of 16.83 metres.

The latest information shows the Nepean River at Camden Weir has risen to 11.95 metres while Hawkesbury River at North Richmond WPS has recorded 10.46 metres.

Meanwhile, areas such as Macdonald River at St Albans and Hawkesbury River at Sackville are currently steady.

The warning comes after Warragamba Dam spilled at around 2am last night, “well ahead of predictions”.

Speaking at a press conference on Sunday morning, Ms Cooke said the disaster had been caused by an east coast low weather system developing off the coast, which is tipped to remain for several days.

“This means even more torrential rain, it means strong damaging winds, and it means coastal erosion in Sydney, the Central Coast, the south coast and the Illawarra,” she warned.

“We are now facing dangers on multiple fronts … If you live anywhere between Newcastle and Batemans Bay, please don’t be caught unaware by the current weather situation.

“This is a life-threatening emergency situation. If you know your local community is prone to flooding, then please be prepared to evacuate and at short notice.”

‘Extremely dangerous out there’

“It is extremely dangerous out there. Stay out of the floodwaters, and we always warn don’t drive through floodwater and particularly don’t walk through them or allow children to play near them,” she said.

“There is no room for the rain to stay in the dams, and they are starting to spill. The rivers are flowing fast and dangerous and then there is the risk of flash flooding depending on where the rains are.

“There are a lot of risks the community needs to be aware of, and I ask you to heed the warning.”

Thousands of residents in areas of Sydney’s southwest have been ordered to leave their homes, and the SES received more than 1400 calls for help overnight following scores of rescues on Saturday.

In one incident, a young woman was rescued after floodwaters left her clinging to a tree for safety for more than an hour in Holsworthy.

On Sunday morning, the Hawkesbury Flood Statistics Unit reported that the river at North Richmond was “rising at a rate of almost 1.5m an hour” as a result of “huge inflows from the Grose River combining with the flood water from the Nepean”.

The bridge has since closed, with the nearby Windsor bridge likely to shut in the next few hours.

Meanwhile, the federal government has announced 100 defence force troops and two helicopters are ready to assist NSW as the situation unfolds, with Defence Minister Richard Marles confirming the government was on the “front foot” as flash flooding threats loom.

Authorities have pleaded with motorists not to drive through flooded roads – one of the leading causes of deaths following extreme rain events.

Overnight, the State Emergency Service issued a number of emergency evacuation or prepare to evacuate notices across west, south west and southern Sydney.

Suburbs in danger of flooding include Wallacia, Camden, Lansvale, Woronora as well as areas of the Liverpool local government area. Parts of Richmond, in the city’s north west, are also on notice.

That’s due to rain pouring into the already swollen Hawkesbury and Nepean rivers on Sydney’s fringe.

SES: ‘You may be trapped’

Many suburbs are in danger of being completely cut off, the SES said early on Sunday.

“You may be trapped without power, water and other essential services and it may be too dangerous to rescue you,” the organisation warned.

Emergency evacuation centres have been set up in Narellan and Canley Vale.

Rainfall totals around Sydney and the Illawarra region have been immense.

At 5am on Sunday, Holsworthy, in Sydney’s south west, had recorded more than 200mm of rain since 9am on Saturday.

Lucas Heights, in the city’s south, bettered that with 215mm. Areas near Wollongong have seen almost 170mm and 150mm fell in the Southern Highlands.

The system is currently off the coast but will steadily get closer as Sunday continues.

“It will be a complex low that means there’s more than one centre,” said Mr Saunders.

“One of the main centres could be sitting right near the NSW Central Coast during Sunday night and into Monday morning.

“If that were to occur, we’re not only looking at heavy rain but also damaging winds on the southern side of the system.

“We could see gusts up to about 100 kilometres per hour and with very wet ground that could see trees uprooted.”

Half metre of rain possible

Sydney could see 80-150mm of rain on Sunday and up to another 40mm on Monday. It won’t be much different in Wollongong.

Mr Saunders said some areas might see as much as 500mm of rain over the multi-day event – that’s half a metre of moisture coming down.

However, the direction these systems take can change, meaning the area of the heaviest falls could alter.

The Bureau of Meteorology has issued a severe weather warning for heavy rainfall, damaging winds, flash flooding and heavy surf along the NSW coast from Newcastle to Ulladulla.

NSW SES Commissioner Carlene York said because dams and rivers were already full, there was “significant” concern about what is to come for communities across the state.

“This significant rain event could have some major effects across communities from Port Stephens down to Batemans Bay so we’re preparing and getting community messaging out to let them know they’re in some of these areas of risk and to be ready.”

Queensland to be drenched

Widespread rain continues across Queensland. After easing on Saturday it should start bubbling up again on Sunday with the heaviest falls seen early in the week.

Across northern parts of the coast, rain totals of 100mm are on the cards.

Townsville will see some showers as the weekend progresses, but Monday is when it will chuck it down, with 40-60mm forecast, and more of the same for Tuesday.

Brisbane should be mainly dry on Sunday. But Tuesday could again see downpours. The other capitals will have a very different weekend with Melbourne, Adelaide and Hobart all remaining dry and partly cloudy with almost uniform mid-teen highs.

Darwin will see some blue skies with maximums of 29C. But it’s Perth that will be gloriously sunny, with relatively mild temperatures only just nudging 20C.