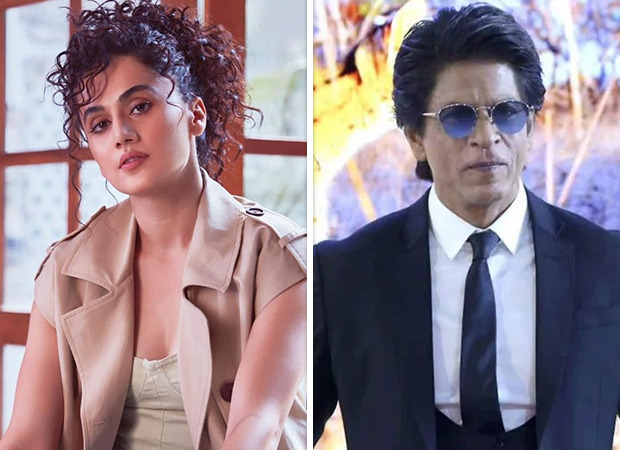 Taapsee Pannu was recently seen on the big screen in Shabaash Mithu. While the film continues to run in theatres, the actress is already prepping for her next venture. Interestingly, Taapsee has been cast opposite none other than Shah Rukh Khan in Rajkumar Hirani’s Dunki. Recently in an interview with Pinkvilla, Taapsee spoke about what she thought of stardom, success and failure at the box office. If that wasn’t enough, Taapsee also spoke about Shah Rukh Khan, and how each success and loss is personal for the mega star.

Talking about Shah Rukh Khan first, Taapsee claimed that SRK is quite literally the benchmark for every newcomer from Delhi. The actor’s success and fame are benchmarks that newcomers strive to achieve. Further revealing Taapsee added, “I’ve told him (Shah Rukh Khan) that he is the benchmark or the person that every outsider especially coming from Delhi looks up to. I’m not a superstar but he is the superstar. I don’t really feel like when you work with people like him or superstars like him you realise that’s what the stakes of the word stardom or star are. That is when paanch saal se koi picture nahi aayi hai (he didn’t have a release in the last five years) but one move of his just creates a storm everywhere. His victories are personal, his loss is personal, that’s stardom. Not what we feel star is.”

Later going on to talk about success and failure, Taapsee revealed that her family members call her a sore loser, and an even worse winner. However, the actress claims that the she has managed to evolve in her professional life and no takes success or failure too seriously. Detailing this evolution she adds, “A lot of other things come with success, especially in this country. It teaches you not to take your success or failures either of them too seriously. That I’ve learned. I’ve not been a good loser. I still…. my family members still call me ‘she’s a very sore loser when I play board games’. I am a sore loser and probably an even worse winner actually. But at work life, I have kind of become better like I don’t take either success or failure too strongly now. It’s not like it doesn’t affect me, it still affects me and it disturbs me a little bit but I have gotten better at coping with it.”

Back on the work front, post Shabaash Mithu which is based on the life of Indian cricketer Mithali Raj, Taapsee also has Anurag Kashyap’s thriller, Do Baara, followed by Dunki.