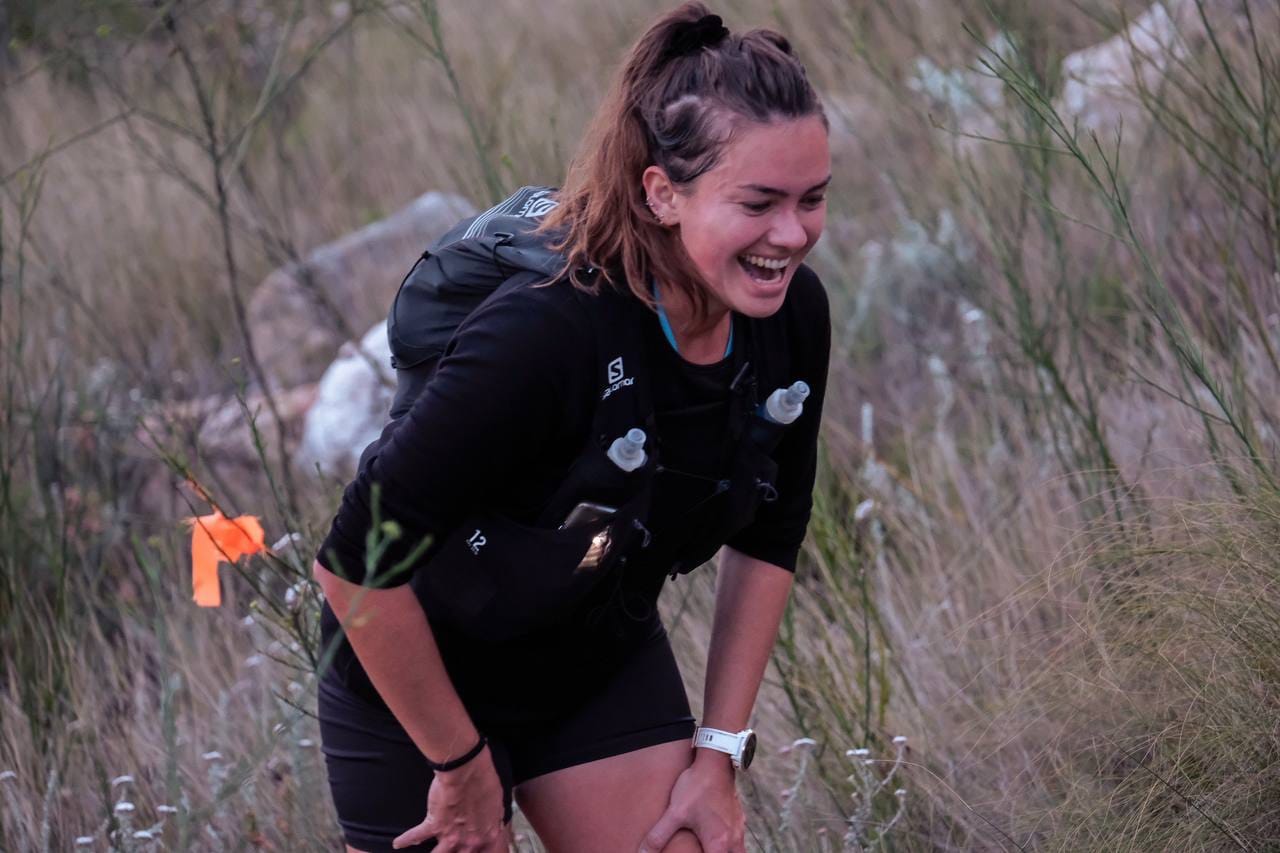 I was lost and scared and my rising anxiety levels meant that I was probably contributing to the level of the adjacent Berg River dam thanks to the tears rolling down my cheeks.

I was around 38km into the 50km Bastille Trail Run and besides being lost, my legs and sense of humour had failed me and I was surviving on pure spite – this blaady race wasn’t going to beat me!

The day started as any other race day. I was super excited to spend a day in the mountains, yet a little nervous. There was such an awesome vibe at the start venue and it was so cool chatting with the other runners. We had our pre-race briefing and off we went into the dark at 6.30am.

I joined a group and ran with them for the first 10-15km. There was great banter and encouragement and the stunning sunrise encouraged us to stop en route to take photos.

I was desperately trying to quell the rising anxiety but couldn’t. I started crying…

We started to climb to the main summit. At one point, I thought I was at the top bu. I was warned that I had quite a scramble still to go. Okay, cool. I enjoyed the climb, felt strong and was enjoying the views and cheering on the other runners that were on their way back down from the summit. I eventually made it to the top, had some sherry (a feature of the race) and was thoroughly in the zone.

I struggled quite a lot on the descent as it was quite technical. I’m not a mountain goat and I’ve always been amazed by how fast some runners can descend down gnarly trails. But I made it down safely and enjoyed the more runnable sections. It was getting warm at this point, so the first river crossing came as a welcome relief. I took off my base layer and pack and submerged myself in the freezing water. It was beautiful and I started again feeling refreshed and happy.

At some point, around the +/- 40km mark, I lost sight of the orange route markers. Shit, I thought.

But ‘Oh wait, I think I see one on the trail below me”. I bundu-bashed to get to this trail including crawling under some barbed wire. I hoped I wouldn’t shred my clothes as I shimmied across the ground but I eventually made it to the lower trail and ran for a while. But I still haven’t seen any more orange markers. Or anyone else. I ran for a bit and started to get more and more worried. I was desperately trying to quell the rising anxiety but couldn’t. I started crying. I decided to turn around, retrace my steps and go back to where I last saw a marker. I called my coach (luckily I had a cell phone signal)  who helped to calm me down, encourage me and explain where I had to go.

Then I spotted another runner on the trail above me. I scrambled back up to the top trail (back under the barbed wire) and saw a lady running toward me. I spluttered through my tears that I was lost and she said that she was, too. I felt less alone knowing that I was no longer alone.

We knew and saw where we had to get to but we just weren’t too sure how to actually get there. We got to a chain-link fence and decided we had to be on the other side of it. My new friend suggested that there is always a hole in the fence somewhere. She was right. We find one, take our packs off and crawl underneath the fence to the other side.

At this point, both of us are battling to keep anything down and we were ready to quit.  We start walking on a road across the dam and I turned around and see two other runners behind us. Ok cool, now there are four of us! Grand. Our group is growing.

We were definitely heading in the right direction, but there was a fence surrounding us. We decide to risk it and scramble up the corner to see if there would be another hole in this fence. Ha ha… there was. Now we are about 5km to the finish and the two of us are walking it out after the two other runners had run and decided on different routes.

My new friend and I were trying hard to find humour in all of this. But she was vomiting every so often, which in turn, set me off. Sympathy vomiting is not a spectator sport.

To say that we enjoyed the last 3km would probably be an overstatement. But as walked, ran a little, and started to talk, we knew we would make it to the finish.

Finally we saw the blessed finish arch and we ran the last 100m shoulder to shoulder before embracing each other just after we crossed the finishing line in 10 hours, 17 minutes.

What did I learn?