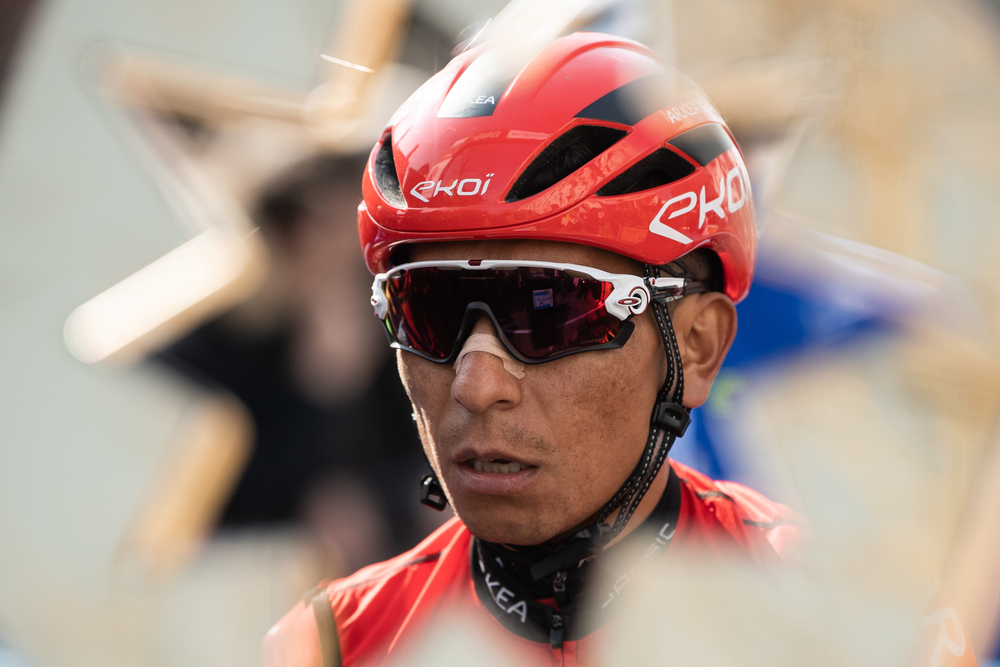 Nairo Quintana has been disqualified from the 2022 Tour de France after testing positive for tramadol, the Union Cycliste Internationale (UCI) announced on Wednesday, August 17. The veteran rider for Team Arkea-Samsic has been stripped of his sixth-place finish in the general classification from last month’s Tour. He can appeal this decision within the next 10 days.

“The analyses of two dried blood samples provided by the rider on 8 and 13 July during the 2022 Tour de France revealed the presence of tramadol and its two main metabolites,” the statement from the UCI reads.

Tramadol is a pain reliever. It is a synthetic opioid that has been banned by the UCI, pro cycling’s world governing body, since 2019. It is, however, not banned by the World Anti-Doping Agency (WADA).

Therefore, in Quintana’s case, the UCI’s medical rules were violated, but not their anti-doping rules. Because of this, Quintana is still eligible to compete at the Vuelta a España—which starts on Friday, August 19.

According to WADA, tramadol can be used by athletes to “reduce exertional pain and allow the athlete to work even harder,” but it maintains that “there is currently no convincing research evidence to support or reject whether tramadol is performance-enhancing in highly trained, healthy athletes.”

The UCI has lobbied WADA to ban tramadol for years, but it has not yet been put on its prohibited list. This excerpt from a broader doping story Bicycling ran in 2015 was in response to former US Postal/Discovery pro Michael Barry documenting his Tramadol experiences while finishing his career at Team Sky:

We’ll be honest: we’re not sure why tramadol isn’t banned. But don’t just take our word for it: The United States Anti-Doping Agency recommended it be added to the prohibited list in 2015, and the UCI made the same request way back in 2011.

Instead, it’s been mouldering in the Monitoring Program for five years.

We know it’s used in cycling, both from anecdotal reports by pros and from hard data. Like all drugs in the monitoring program, tramadol is tested by WADA to monitor use patterns. Over a three-year period from 2012 to 2015, WADA found that of the samples it tested that contained tramadol, more than 70 percent came from cyclists.

The drug has been criticised for its side effects, like dizziness and balance issues, both of which can be dangerous for cyclists riding millimetres apart at 50km/h. Tramadol also is a potent opioid painkiller that can be physically addictive.

Additionally, WADA has the discretion to ban a drug at all times or only in-competition, which means it could carve out an exception for non-competitive use.

As Taylor Phinney said in a 2012 interview: “You have to ask why are you taking a painkiller? You are doing that to mask effects that riding a bike is going to have on your body… But the whole reason we get into sport in the first place is to test our bodies, to test our limits.”

UCI implemented its ban in 2019 “in order to protect the riders’ health and safety in light of the side-effects of this substance.” Tramadol has been criticised for giving riders an advantage in the peloton, but also putting them at risk for addiction and increase in the potential for falls in competition.

A 2018 Journal of Science and Medicine in Sport study found that tramadol can lead to impaired focus and attention. Yet, it remains worryingly popular… data from WADA itself seems to bear this out. Its Monitoring Program report for 2017 found that cycling does indeed have a painkiller problem.

Pro riders, according to the data, still use the drug at a greater rate than any other endurance athletes, with 4.4 percent of samples testing positive last year. By comparison, a mere 0.2 percent of triathletes tested positive for the painkiller in the same time period.

Bear in mind that Tramadol use in cycling has declined a bit since 2015, when nearly 6 percent of doping controls tested positive. But the sport remains an obvious standout, and calls for banning the drug will likely continue if the numbers fail to decline further.

Cyclists also rank higher than other endurance sports for in-competition use of glucocorticoids, steroids that quell inflammation, with 3.8 percent of samples testing positive compared to just shy of 1 percent among triathletes. Both cyclists and triathletes tested about the same, 4.4 percent and 4.8 percent, respectively, for out-of-competition glucocorticoid use.

Traditional ball and power sports, meanwhile, tested just as high or higher than cycling for Tramadol use. Basketball led the way with 8 percent positive samples, followed volleyball at 3.7 percent, power lifting and golf at 1.7 percent, and rugby and baseball at 1.4 percent.