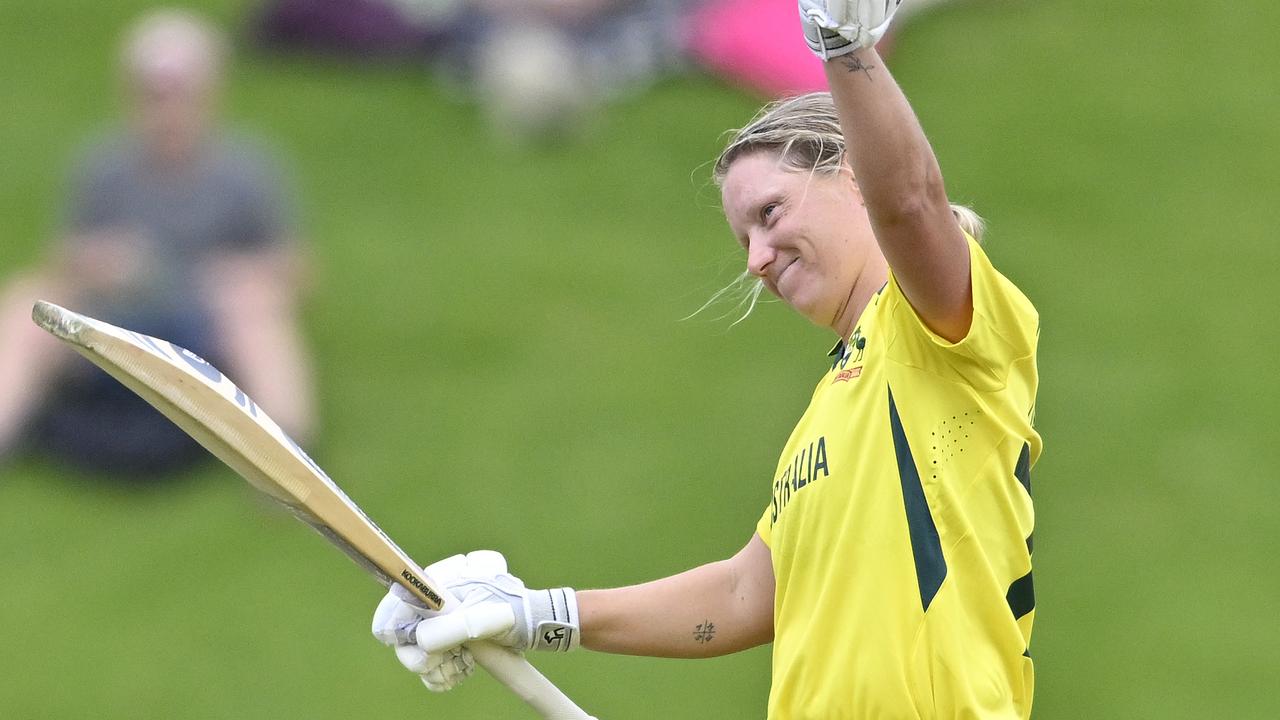 Australia’s spot in the World Cup final is all but secure after Alyssa Healy smacked a blistering century during Wednesday’s semi-final.

Australia’s spot in the World Cup final is all but secure after Alyssa Healy smacked a blistering century during Wednesday’s semi-final against the West Indies in Wellington.

The talented wicketkeeper cracked 129 from 107 balls at the Basin Reserve to help Australia register a whopping total of 3/305 from their 45 overs.

It ranks as the largest team score in a Women’s World Cup knockout match.

The knockout fixture was briefly delayed due to rain in the New Zealand capital, with the match reduced to a 45-over affair.

The West Indies won the toss and elected to field first — Healy was patient during the Powerplay, scoring 11 runs from her opening 29 balls at the crease.

But the 32-year-old accelerated in the middle overs, ruthlessly attacking the West Indies bowlers as she raced towards a fourth ODI century, making 89 runs off her next 62 deliveries.

Healy’s brutal onslaught featured 18 boundaries, including a towering six that flew over the long-on boundary.

She combined with Rachael Haynes for a 216-run opening partnership, Australia’s largest first-wicket stand in women’s ODIs in more than 25 years.

It also ranked as the third-highest opening partnership in women’s World Cup history, falling 30 runs short of the all-time record.

Cricket reporter Adam Burnett tweeted: “Alyssa Healy has now delivered spectacularly in her side’s two biggest matches of the past three years. Australia has been spoilt for classic World Cup innings across the past 25 years, and that is absolutely another.”

The Age’s Daniel Brettig posted: “Given the conditions, would be hard to find a better Aust opening stand than this one by Haynes and Healy. And though it was in front of a smaller crowd, that Healy hundred outstrips the T20 World Cup final knock for quality.”

The Australian openers were heavily assisted by some sloppy fielding, with the West Indies spilling four regulation catches during the partnership.

Healy was eventually dismissed by pace bowler Shamilia Connell in the 33rd over, with Haynes falling soon after for 85 off 100 balls.

Australian captain Meg Lanning and white-ball powerhouse Beth Mooney combined for an unbeaten 69-run partnership for the third wicket to help set up a 306-run target for the West Indies.

A record run chase is required for the West Indies to progress through to Sunday’s final against either South Africa or England.

Superstar all-rounder Ellyse Perry was ruled out of Wednesday’s semi-final as she continues to recover from back spasms.

“Unfortunately, for her and the team, a big blow, but we feel like we have got some good depth to cover it and we are going to have to do that,” Lanning said before the match.