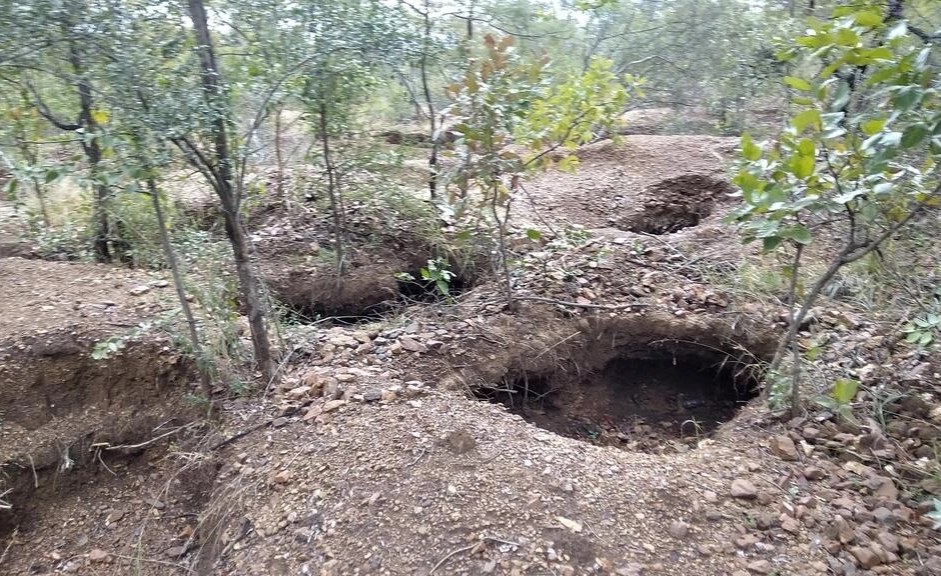 The clinking sound of metal tools hacking against rocks along the dry riverbed shatters the serenity of the pristine Bhuka mountains of Masvingo, Zimbabwe. A small group of women and children dressed in shabby brown clothes busily dig in the rich soil, using the most rudimentary utensils to look for gold-bearing stones and nuggets.

One of the women, Thelma Murambiwa, furtively digs into the developing burrow – turning the soil over and keeping a sharp eye out for the glitter of gold.

A few droplets of sweat trickle down her weary forehead. She knows the pit can cave in any second. She deposits her three-year-old daughter on a mound of sand, where she can regularly cast an eye on the restless toddler and look out for approaching police officers.

A few metres away from Thelma’s spot, a teenage boy also digs for gold using a small sharp pick, breathing in the dust that emerges.

Should any of these pits fail to yield any gold, the women and children pick up their tools and head for another virgin area of the riverbed to dig.

The thin line between sleeping hungry and going to prison does not matter to them anymore. The allure of gold and United States dollars drives them to keep digging for this precious metal.

Employment opportunities in Zimbabwe have hit an all-time low, as the economy continues to take knocks due to political snags.

The government of Zimbabwe attributes its hardships to western sanctions imposed as part of a regime change agenda, while the west has fingered human rights abuses and corruption as Harare’s Achilles heel.

The gold rush in Bhuka is part of a broader mining boom across many parts of the country, driven by high mineral prices, a rapidly shrinking industrial base, struggling crop prices and a poor agricultural season.

The hardest hit have been society’s most vulnerable members, women and children. More women and children as young as 12 are working in illegal gold panning, along hazardous river banks, strewn with dangerous pits.

Notwithstanding the dangers of small-scale artisanal mining, such as collapsing pits and potential arrest by police, hordes of women and children are chasing alluvial gold that will get them out of their misery.

Gold is one of Zimbabwe’s top foreign currency earners. According to Fidelity Printers and Refiners (FPR), the country’s sole government owned gold buying firm, gold output by both small scale and large-scale miners went up by 79 percent in May 2022, compared to the same period last year.

Gifts on the mountain

The dry riverbed, which meanders across the mountain, bears the ugly marks of endless gold panning activities, posing huge physical risk to the unobservant eye.

The riverbed is an eyesore, as deep pits and dug-out rocks scar the mutilated environment. Some trees hang precariously while others cave in to the loosened soil, lying lifelessly, uprooted.

One child, named Alex to protect his identity, aged 14, told Africa Calling that ever since he began alluvial gold panning during the 2020 coronavirus lockdown, he has never looked back.

“We didn’t have much to do so we just joined others who were already involved in gold panning. We just work in this field because we need to raise money for food and it’s not necessarily that we are trying to get rich,” said Alex.

Alex said that he and his older colleagues face very difficult times with the regular police raids as some of them have been arrested and locked up for a minimum of two years, without the option of a fine.

Section 3 subsection 1 of the Gold Trade Act prohibits dealing in or possession of gold without the required licence. This law also has a provision for a maximum of five yeaars imprisonment for illegal gold possession.

“We can barely make money for survival because we spend a lot of our time fleeing police raids,” he said.

“We can even spend two days away from the pits, things are just so tough. I’m taking care of my siblings through this way of life,” he added.

Thelma, a resilient single mother-of-five, began gold panning last year and has managed to send her children to school through this illegal activity.

“I saw that there isn’t any other plan for me to get money,” she said.

“The buyers usually pay 45 US dollars per gram of gold but I feel that with the high percentage or quality of alluvial gold, we are being ripped off.

“At least if they could pay us 55 US dollars per gram that would be far better.”

Alluvial gold fetches top prices on the black market as the quality of the gold is very high.

Most buyers pay 58 US dollars to 60 US dollars per gram for such gold. Asked if they could sell the gold through official channels to FPR, Thelma said that was out the question as they are working without a permit.

She points out that their level of desperation in order to survive leaves her and her family without room for price negotiations on the black market.

“The regular police raids as we work are a cat and mouse game,” she added.

“We are ever ready to flee. Some of us get caught … it’s such a huge drawback. As we dig for this gold, we are very united, we take turns to look out for any new and suspicious faces as we work.

At times we share the proceeds from the mining. Our families can at least have a meal, it’s better than nothing.”

Thelma said that she hopes to pull herself out of illegal gold panning and aspires to one day raise capital to start a small business. She wants to buy bales of second-hand clothes from Mozambique for resale.

The economic situation in the country is not conducive to sustaining rural people’s livelihoods, leaving them without any income generating projects which they can run, said Daniel Chitenje, the Masvingo regional representative of the Zimbabwe Miners Federation (ZMF).

The ZMF is a government initiative formed to effect sustainable growth and transformation of the artisanal and small-scale mining industry.

“This economic crisis has caused some parents to take their children to dig for alluvial gold in the riverbeds.

“The mountainous Bhuka area is very rich in alluvial gold deposits, so it is very lucrative. Once a child leaves school and manages to get some gold for sale, he or she won’t leave such activities as the child has cash in hand, time and again,” said Chitenje.

Chitenje told Africa Calling that entire families are digging for gold because this is the only way they can survive right now.

He said that as a small-scale and artisanal representative body, the ZMF has a program for women in mining.

Under this scheme, women are encouraged to register a claim as a group of 10 to apply for funding from a joint venture between FPR and the ZMF.

“We observed that small-scale and artisanal miners are producing the largest chunk of gold output, in comparison to large-scale mining firms.

“If we could harvest all the small quantities of gold mined by this group of people, this could help the government to have more gold reserves,” said Chitenje.

“So, by arresting every small-scale miner, this only encourages and promotes the illegal gold trade,” he said, adding that all this gold is being funnelled out of the country illegally through the black market.

He called for the easing of punitive gold possession laws.

Other stakeholders such as the Gold Miners Association have called for the decriminalising of gold possession to boost output and deliveries to FPR.

The availability of cash from the sale of gold has turned the rural community of Bhuka into a cesspit of illicit sexual activities. The scourge of HIV/AIDS is ravaging these mining communities in the Bhuka area.

A 15-year-old girl named Sphiwe said that financial hardships in her family, which affected her schooling, pushed her to pan for gold in the riverbeds of Bhuka. She expressed awareness of her vulnerability to exploitative men.

Sphiwe said that some men lure girls with lots of money to sleep with them and in some cases they are not paid at all.

Munorwei Munyikwa, the Masvingo provincial monitoring and evaluation officer for the National Aids Council (NAC), told Africa Calling that older men are preying on younger women and girls, while transactional sexual activity is rife in the area.

“Transactional sex is done in exchange for goods or money and in that regard most of time the preconditions for having protected sex are disregarded.

“Intergenerational sex happens between people with more than five years age difference, so this becomes a challenge as the other part is more experienced and there is a likelihood of exploitation in those sexual relationships,” said Munyikwa.

The NAC carried out a study along the Harare-Beitbridge highway, along which Bhuka and the mountains are located.

The findings revealed numerous cases of sexual exploitation along the highway, including risky intergenerational sexual activity.

In recent years, small-scale and artisanal miners have become the biggest contributors of gold to Fidelity Printers and Refiners, effectively contributing just over 50 percent of bullion.

However, most of these miners, including women, are hamstrung by limited access to sophisticated mining equipment, subjected to arrest over lack of gold possession permits and difficulties in securing mining claims.

The environment is taking a toll as illegal gold panning along river beds continues unabated in the country, while the biggest casualties are vulnerable women and children.

This story was first heard on RFI’s Africa Calling podcast.